Sands Of Mali To Stand At Ballyhane 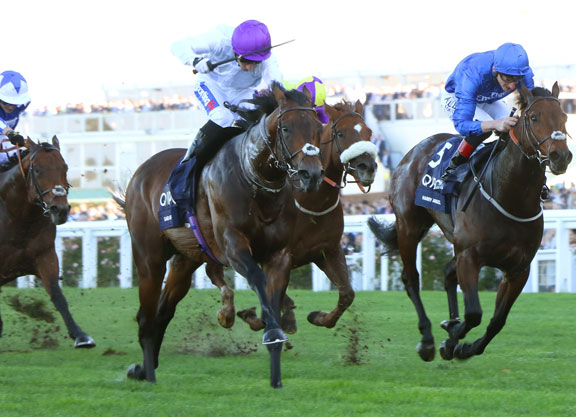 Sands Of Mali (Fr) (Panis-Kadiania {Fr}, by Indian Rocket {GB}) has been purchased by Joe Foley's Ballyhane Stud, where he will join the stallion roster for 2021 alongside the likes of Dandy Man (Ire) and Prince Of Lir (Ire). The news was first reported by Racing Post. Owners Cool Silk Partnership announced earlier this week that the Group 1-winning sprinter had been retired from racing.

Sands Of Mali won the G2 Gimcrack S. at two for trainer Richard Fahey and built on that promise at three. He won the G3 Prix Sigy on seasonal debut before besting Invincible Army (Ire) (Invincible Spirit {Ire}) in the G2 Sandy Lane S., and finished the best of his stands' side group when a fast-finishing second in the G1 Commonwealth Cup at Royal Ascot. Sands Of Mali would return to that course and distance four months later to best Harry Angel (Ire) (Dark Angel {Ire})–as well as the prior year's and next year's race winners Donjuan Triumphant (Ire) (Dream Ahead) and Librisa Breeze (GB) (Mount Nelson {GB})–in the G1 British Champions Sprint S., with the likes of Brando (GB) (Pivotal {GB}), The Tin Man (GB) (Equiano {Fr}), Limato (Ire) (Tagula {Ire}) and Speak In Colours (GB) (Excelebration {Ire}) down the field.

Foley admitted he has been a fan of Sands Of Mali since seeing him win the Gimcrack.

“I had seen Sands Of Mali win his maiden on TV and was impressed by him,” Foley recalled. “I was in York for the Gimcrack as I am every year because the Gimcrack is one of my favourite races. Sands Of Mali was very, very impressive that day. I watched him closely in the parade ring and after the race I thought, 'well, this is a good horse.' I followed his career from then, saw him in the Sandy Lane; I was at Ascot when he was unlucky to not win the Commonwealth Cup. And then he won the British Champions Sprint S.

“I was impressed with him physically in the parade ring at York and I'd seen him a few times in parade rings since, and at Richard Fahey's yard on a couple of occasions because we have horses in training with Richard. Being close to Richard Fahey I do know how highly Richard rated him. I remember we had a good 2-year-old at Richard's two years ago, and he did turn out to be good, but I said early on, 'is he as good as Sands Of Mali?' And Richard said, 'I'm afraid he's not quite that good.'

“He was a talented racehorse and he's a big, fine, good-looking horse. I followed him all the way through and tried to buy him on a number of occasions and I'm glad we have finally bought him. Beating Harry Angel in the British Champions Sprint, that's high-class Group 1 form, and there were seven or eight Group 1 winners behind him that day. It wasn't a fluke, he'd done it before, winning the Sandy Lane very impressively and I thought he was very unlucky in the Commonwealth Cup; he's unlucky to not be a multiple Group 1 winner. Those sorts of horses are difficult to come by. He was one of the best horses of his generation.”

At first glance Sands Of Mali's pedigree may not be the flashiest, being by the little-known Panis out of an Indian Rocket mare, but Foley said he thinks there is plenty of underlying quality.

“He's by Panis, and everyone says, 'who is Panis?'” Foley said. “Panis is by Miswaki and I'm a huge Miswaki fan, always have been. I had Rossini here, who was by Miswaki, who was a very talented first-season sire before I sold him to America. And Sands Of Mali is out of a very good mare; she's bred three good racehorses from three attempts. She's an Indian Rocket mare, the same as Goken who has started so well in France this year. There are lovely elements to his pedigree that I'm a big fan of as well.”

Already a master in many aspect of the bloodstock business, Foley notched another new accomplishment last weekend with the inaugural running of the Irish EBF Ballyhane S. at Naas. Restricted to 2-year-olds whose sires averaged no more than €75,000 at the sales last year, the Ballyhane S. proved so popular that it drew an Irish record of 563 initial entries. It later received a purse boost to €320,000 from €200,000 and a consolation race, the Silver Irish EBF Ballyhane S. worth €80,000, was added. The main race was won by Ballydoyle's Chief Little Hawk (Air Force Blue), while the John Joseph Murphy-trained Sweet Gardenia (GB) (Showcasing {GB}) took the consolation prize.

While the early signs for the Ballyhane S. are very positive, the coronavirus pandemic made it so that the process wasn't without its hiccups; the race had to be moved from Aug. 3 to Aug. 23, and quarantine restrictions made it more complicated for foreign-trained horses to participate.

“I think we had to cope this year because of the coronavirus impact on the racing programme,” Foley said. “Unfortunately we had to switch our date; we had originally planned to have it on Aug. 3 and we had to switch it to Aug. 23, which had a negative impact on the race in my opinion. It moved it onto what became soft ground but it also moved it into competition with other races such as the Doncaster sales race in York, the Roses S. and a couple other stakes races for 2-year-olds. On its original date on Aug. 3 it stood out on its own.

“Given that, we were delighted with the response to the race initially with the entries and the way people left their horses in at the forfeit stages. The goodwill around the race is very strong. I think due to the soft ground we encountered in Naas, the opposition from other races and the whole COVID protocol that British trainers have to undergo to get a horse to Ireland currently, I think it tempered the final field, but it did stand up and was a very solid race as was the consolation race. So I'm very pleased with that but I'd like to get it back into its original date. I think it has a lot of scope to improve. I'm very pleased with the reaction the race got and the goodwill it seemed to have.”