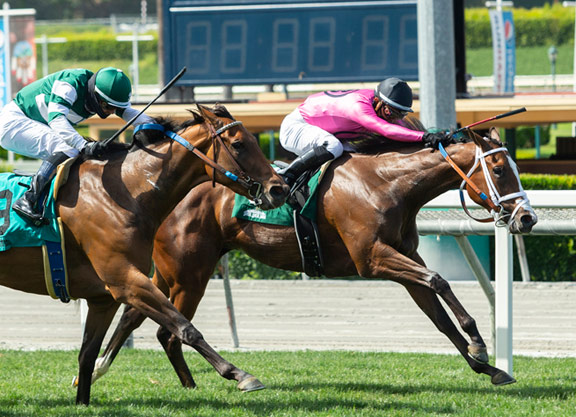 The first three finishers from the local GII San Clemente S. will reconvene in Saturday's GI Del Mar Oaks with a pair of Group winners from Europe shipping in to spice things up in the nine-furlong test for 3-year-old turf fillies.

Of the local hopes, San Clemente victress Laura's Light (Constitution) figures to take the most play as she tries to make it six wins in eight career outings. A debut winner sprinting on the all-weather at Golden Gate last November, the bay was privately purchased by Gary Barber out of that effort and transferred to Peter Miller's barn. Runner-up at 24-1 in the GIII Jimmy Durante S., she annexed the Blue Norther S. and GIII Sweet Life S. over the winter at Santa Anita before fading to fourth at odds-on in the Bourbonette Oaks Mar. 14 at Turfway. Back on turf in the GIII Honeymoon S. going this distance May 30 in Arcadia, she tracked a runoff leader from second, overtook that one in the stretch and held gamely late to prevail before tracking a fast pace and triumphing by three-quarters of a length last out.

Attempting to reel her in that day were Guitty (Fr) (Dunkerque {Fr}) and Warren's Showtime (Clubhouse Ride). The former, who won her first two American starts after shipping in from her native lane, was off the board in four straight efforts before completing the exacta at 19-1 in the San Clemente. The latter, victress of the Surfer Girl S. and China Doll S. going a mile on the Santa Anita lawn, added the California-bred Melair S. over dirt before closing from last to finish 1 1/4 lengths behind Laura's Light.

Miss Extra (Fr) (Masterstroke) took five tries to get off the mark in her home country before doing so at 11-1 against males May 11 at Longchamp. Repeating in the Prix de Lilas at Deauville 20 days later, the bay made it three in a row in the G2 Prix de Sandringham June 19 at Chantilly before finding Group 1 waters a bit too deep when ninth in the Prix de Diane Longines there July 5.

The progressive Neige Blanche (Fr) (Anodin {Ire}) also makes her Stateside bow. Graduating second out over the boys on Marseille's synthetic surface last November, she repeated in an allowance there Dec. 26 and was third two starts later in her turf debut, the Prix Caravelle May 11 at Toulouse. Stepping into Group company, she captured the G3 Prix Cleopatre at 10-1 going 1 3/8 miles over soft ground last out June 6 at Lyon-Parilly.