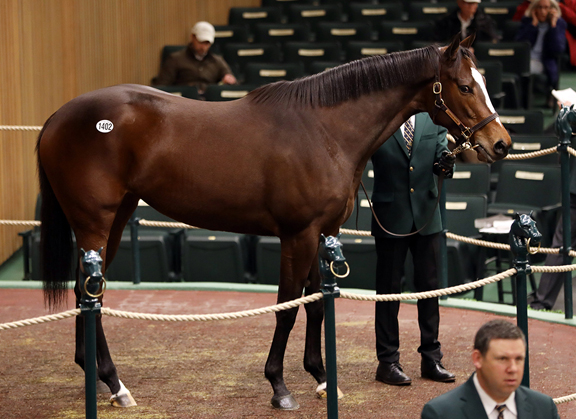 LEXINGTON, KY – The Keeneland January Horses of All Ages Sale concluded its penultimate session Thursday with the unraced Sam-Son Farm-bred filly Electricita (Ghostzapper) (hip 1402) bringing the top price of $180,000. The 4-year-old mare, who was purchased by Cecil Seaman on behalf of Jon Marshall, was one of three to bring six figures during the session. Jim FitzGerald's Knockgriffin Farm purchased the session's top two priced short yearlings, going to $90,000 for a son of Street Boss (hip 1486) just one hip after purchasing a colt by American Freedom (hip 1485) for $80,000.

The final session of the Keeneland January sale begins at 10 a.m. Friday.

Bred and consigned by Sam-Son Farm, the unraced filly is out of Dance With Doves (A.P. Indy) and is a half-sister to graded placed Dance Again (Awesome Again) and Swoop and Strike (Smart Strike). Her second dam is Canadian champion Dancethruthedawn (Mr. Prospector).

“It's an unbelievable family,” Seaman said after signing the ticket on the filly (hip 1402). “We might put her back in training.”

Sally Nims, sitting alongside Seaman as he did the bidding, added, “Jon asked us what else had sold in the family and we told him nothing. He was thrilled when this one was offered. He wants to breed her, but she might race.”

Marshall lives in Houston, and is retired from the offshore drilling business. He campaigned multiple graded stakes winner Tricky Escape (Hat Trick {Jpn}). That 7-year-old mare was bred to Medaglia d'Oro last spring and is expecting her first foal this year.

“We were very reasonable with our reserve,” Whitford said. “[The reserve was] well under that and we were prepared to take her home of course. We were delighted with the price.”

Electricita did put in a series of works at Fair Hill in 2018, but has yet to make it to the races.

“We really did like her as a racing prospect, we just couldn't get her to the races unfortunately,” Whitford said. “We knew that there were plenty of people that would like her as a broodmare. We've got lots of different parts of that family. We've got different limbs of that tree, you might say. It's a family that just keeps on giving to us. We still have lots, so we're not afraid to sell some. But we don't do it very often, I suppose, especially for a nice filly like that.”

Also Thursday, Sam-Son sold Thrill of Giants (Giant's Causeway) for $70,000 to Kendel Standlee. The 4-year-old (hip 1270) sold as a racing or broodmare prospect. She is out of Catch the Thrill (A.P. Indy) and her second dam is champion Catch the Ring (Seeking the Gold).

“She wouldn't have fit our broodmare band, but we were delighted to sell her to people who are just getting into the game,” Whitford said. “Giant's Causeway out of an A.P. Indy mare is just a nice line for broodmare duty as well.”

Adrian Wallace added Tip Top Tap (Tapit) to his broodmare band when going to $150,000 to acquire the 5-year-old in foal to Kantharos Thursday at Keeneland.

“She's by Tapit, it's a lovely family, and she's very well covered,” Wallace, who signed the ticket on hip 1272 as Stripes Stable, said. “I think she'll be a very nice broodmare. We'll take her home and see what kind of foal we get and then we'll see who we will breed her to next. She's a nice young mare and very well related, so hopefully she'll be a nice mare for the future.”

Tip Top Tap, bred by Saint Elias Stables and Gainesway Thoroughbreds and consigned Thursday by Gainesway, was winless on the racetrack while racing for Alex G. Campbell, Jr., but is a full-sister to Grade I winner Ring Weekend.

“It's obviously a very good family with Ring Weekend in there,” said Gainesway's Neil Howard. “And Tapit is making a name for himself as a broodmare sire. She'll be one of the better mares on the day, so we are delighted she brought that kind of money.”