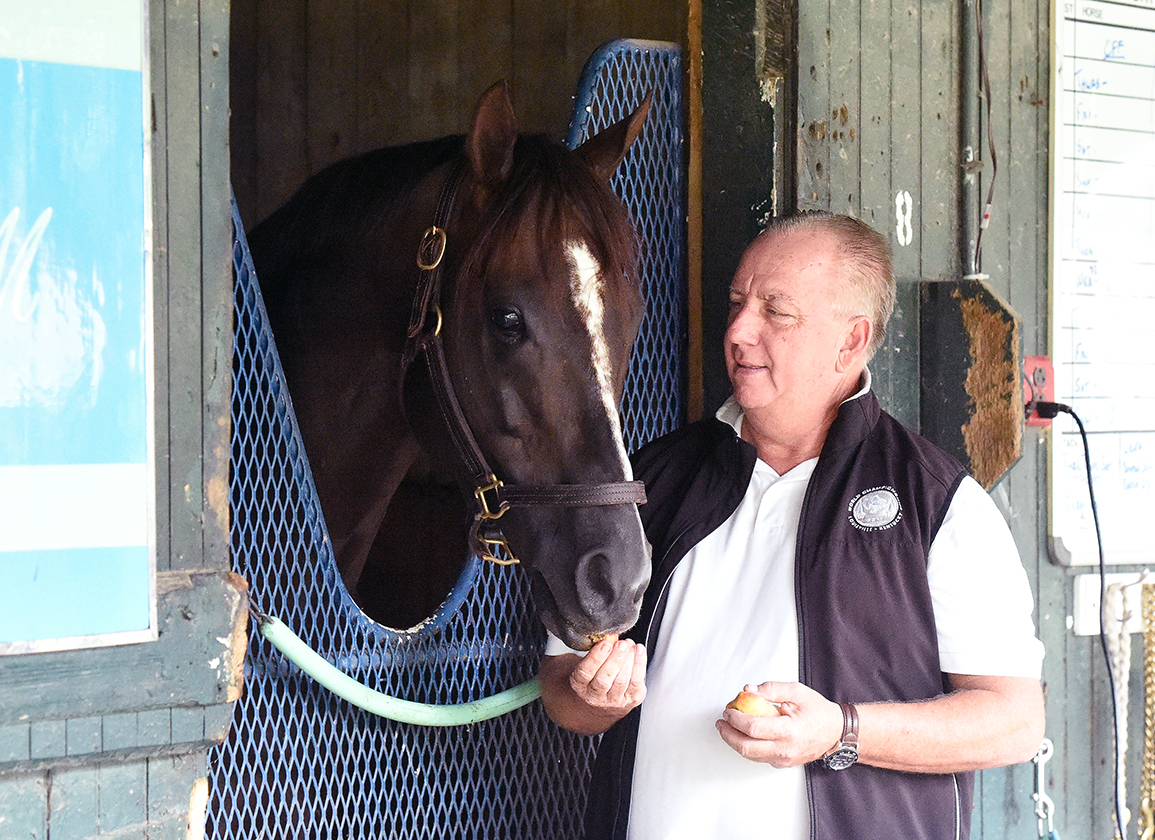 It's been a difficult few years for Phil Serpe and his stable. Like many smaller outfits trying to compete at a top-tier racing circuit, he has seen his number of horses dwindle as owners move in favor of consolidating their operations in the barns of “super trainers”. Partly due to circumstance, partly due to that increasing monopolization of the sport, Serpe has had an especially trying 2021. Heading into this past weekend, he had just two winners to his name since the calendar turned–a 4-year-old maiden-breaker named King Angelo (Lemon Drop Kid) Aug. 14 at Saratoga and a 38-1 upsetter in a Belmont allowance/optional claimer back on May 2 named Safe Conduct (Bodemeister).

So it made all the difference in the world–certainly more than it would have to any of the factory-sized barns he tries to compete with–when the latter runner, overachieving $45,000 weanling buy Safe Conduct, worked out a trip from the rail, struck the lead at the five-sixteenths pole, fought off several stretch challenges and held on by one jump over fast-closing Riptide Rock (Point of Entry) Sunday at Woodbine to win Canada's richest and most famous race, the 162nd running of the $1-million Queen's Plate. Though he was unable to be there in person, Serpe fully relished the victory after the year his outfit has experienced.

“We had an unusual amount of injuries this past winter for some reason, that's just the way things are sometimes,” said Serpe. “So we are a little bit down on stock, but we're working on that now. A race like that means a lot, regardless of if you're training six horses of 60 horses. It's Canada's premier race and it's great to be a part of it. I wish I could've been there, but because of COVID reasons we decided it was best to do things the way we did them. So my partner Lisa Bartkowski went up with the horse and handled things up there, and everything worked out.”

Serpe deflected much of the plaudits for the triumph onto the brilliant ride by Irad Ortiz, Jr., riding in his first Queen's Plate and piloting Safe Conduct for the first time. Ortiz asked the dark bay colt for just enough speed early to escape the fence, giving his mount the perfect two-path stalking trip in the clear before finishing with typical gusto to just hold on at the wire.

“I really have to give a lot of the credit to Irad,” Serpe said. “It's tough coming out of the one-hole up there. We were the last ones to pick so that's the slot we got. He did a great job getting the horse out of there and getting some position without using a lot of horse. I think that was instrumental in the horse winning. And Irad finishes the best of anybody in the stretch so we knew we were going to get that.”

Serpe showed steadfast confidence in his horse by sending him to Woodbine to make his all-weather track debut in the Queen's Plate. After upsetting that Belmont allowance, in which he out-finished recent GII Hall of Fame S. hero Public Sector (GB) (Kingman {GB}), Safe Conduct had beaten just two horses combined in his next two starts, finishing a distant fourth in the rained-off GIII Pennine Ridge S. and fading to eighth over 'good' turf in the GI Belmont Derby Invitational S. But Serpe didn't waver from going after a race he has long had his eye on for the talented Ontario-bred.

“The Queen's Plate was always on our target map from last year,” he said. “That's what we were thinking about last year, was to try to get him in the Queen's Plate. The other races, it was just unfortunate but it wasn't like he didn't run well. The Pennine Ridge came off the turf and we tried to run him in the slop. The race had fallen apart and he's the kind of horse you think would run through anything. Then in the Belmont Derby, that turf had taken a lot of rain and he just wasn't getting anywhere. He came back from those races in good condition and coming into this race, there was nothing he could've done any better. His last work leading up to the race was sensational.”

Sunday's success in a marquee race was undeniably big for the Serpe barn. In 2018, Serpe cleared the $1-million earnings mark for the 11th time, with his runners banking the third-highest total in his 38-year training career. But in 2019, his earnings fell to $642,351, and last year, his horses earned $406,785, his lowest total since 1984, the year he started training. For perspective, Serpe's barn earned C$600,000–currently equivalent to $476,490 in U.S. dollars–for Safe Conduct's Queen's Plate score alone.

“It's a big help to our stable,” he said. “We were one of the leading trainers for Flying Zee Stable and when we lost Carl Lizza, we lost a lot of horses in New York–for everybody, but 30-35 for us every year. Then we were fortunate enough to have Chester and Mary Broman, but Mr. Broman has now decided to slow way down. He just has a handful of horses left. We were lacking horses. It's kind of sad because I don't know what people think, that only a handful of guys know how to train horses? There's a lot of guys out there who are competent horsemen who don't have horses. And we're starting to feel the effect of that.”

Lizza died in 2011 after a successful 35-year run of owning horses in New York–he was NYRA's leading owner for the year at the time of his death–leading to a dispersal of his substantial Flying Zee stock. The Bromans have 28 starts in 2021 as of this writing; at their peak in 2017, they had 263. So without the support of those once-massive New York breeding and racing operations, Serpe has struggled to keep his foothold against seemingly an army of high-priced auction and private purchases.

“When we trained for Mr. Broman and Flying Zee Stable, you're training for breeders, so whatever comes out is what you get,” he said. “You don't get to handpick these horses, you don't get to go buy them privately, so sometimes it's good, but sometimes you might not get great horses. Now you're winning at 14 or 15% instead of the miracle workers that are winning at 37%. It's frustrating. It is. But we just keep working, doing our job and that's just the way we are.”

Serpe puts some of the blame for the consolidation on the backstretch on the tracks themselves, and says some owners may be getting the runaround from mega-barns for their non-star horses.

“Partially it's the racetracks' fault,” he said. “That's why they would put in a stall limit, because they didn't want guys monopolizing what was going on out there in the races. And if you've got a guy who's got 10 one-other-thans, he's not running all 10. So I got news for you, as an owner, you're getting put on [the shelf] if yours is horse number eight. That's where you're going. You might think you're running at Saratoga; you might not run until Aqueduct. I think people need to rethink that a little bit, because there are some really good guys out there, and I consider myself one of them, that just need a shot.”

For now though, Serpe is appreciative to have Safe Conduct in his barn, and he has WellSpring Stables' owner Dr. Robert Vukovich to thank, in more ways than one. Vukovich's operation, named after the pharmaceutical corporation he founded in 1999 and sold in 2011, has maintained its investment in Serpe as it has increased its earnings each of the past four years. And Vukovich himself picked Safe Conduct out as a nine-month old weanling at Keeneland November in 2018.

“I was kidding around with Dr. Vukovich. We kind of knew right away with the horse, we didn't know how good he was, but we just knew he wanted to be a racehorse,” Serpe said. “He just loves to train. I said, 'Did your wife pick out this one or something? He's different than all the other ones you've picked out.' I don't know how much he appreciated that [laughs], but I always rib him about it. But this horse is all him. I had nothing to do with it and I was very fortunate he sent the horse to me.”

Occasionally, fortune in racing does still smile on the little guy.