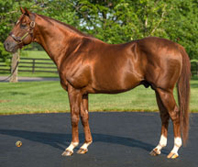 3rd Dam: Oh What a Dance, by Nijinsky II

Wrath of Ruthie displayed a steady string of local works leading up to this debut and was hammered down to 4-5 favoritism to make good on that early promise. Away well from the nine-hole, the $650,000 FTSAUG buy dueled for second through a sharp first quarter in :21.64 and stuck her nose in front as they hit the half in :44.96. Running two-wide the whole way, the bay effortlessly sailed clear in the stretch under a motionless Ricardo Santana, Jr. to win by a decisive 9 1/2 lengths. Treasure (Medaglia d'Oro) completed the exacta. Wrath of Ruthie is out of a half-sister to GISW Dancing Forever (Rahy) and her second dam is GISP Dancinginmydreams (Seeking the Gold), who is a full sister to champion Heavenly Prize. This is also the family of GISWs Persistently (Smoke Glacken) and Good Reward (Storm Cat), as well as GSW sire Pure Prize (Storm Cat). The winner's dam has an unraced juvenile filly named Ready Recall (More Than Ready), a yearling full sister to the winner, and a weanling colt by Orb. She was bred back to champion Will Take Charge. LNJ Foxwoods seems to have a propensity for picking out nice fillies as Wrath of Ruthie is their fourth filly to earn “TDN Rising Star” status this year following Super Majesty (Super Saver), Constellation (Bellamy Road) and Inheritance (Tapit), and they paid a pretty penny for each of them. The first to earn Rising Star status was Super Majesty, a $400,000 FTFMAR buy under the care of Jerry Hollendorfer who captured Keeneland's GIII Dogwood S. Steve Asmussen cares for for impressive maiden winners Inheritance, who set an OBS record when sold for $1.9 million at OBS April, and Constellation, an $800,000 OBSMAR purchase who finished second in the GII Matron S. and third in the GI Spinaway S. to complete a Rising Star trifecta. Asmussen oftlinealso trains LNJ Foxwoods's GI Frizette S. winner Nickname (Scat Daddy), who is the least expensive of the bunch as a $350,000 KEESEP yearling and most recently finished fourth in a loaded renewal of the GI Breeders' Cup Juvenile Fillies Oct. 31. Click here for a TDN profile on LNJ Foxwoods. Lifetime Record: 1-1-0-0, $33,000. Click for the Equibase.com chart, the free Equineline.com catalogue-style pedigree or VIDEO, sponsored by Fasig-Tipton.