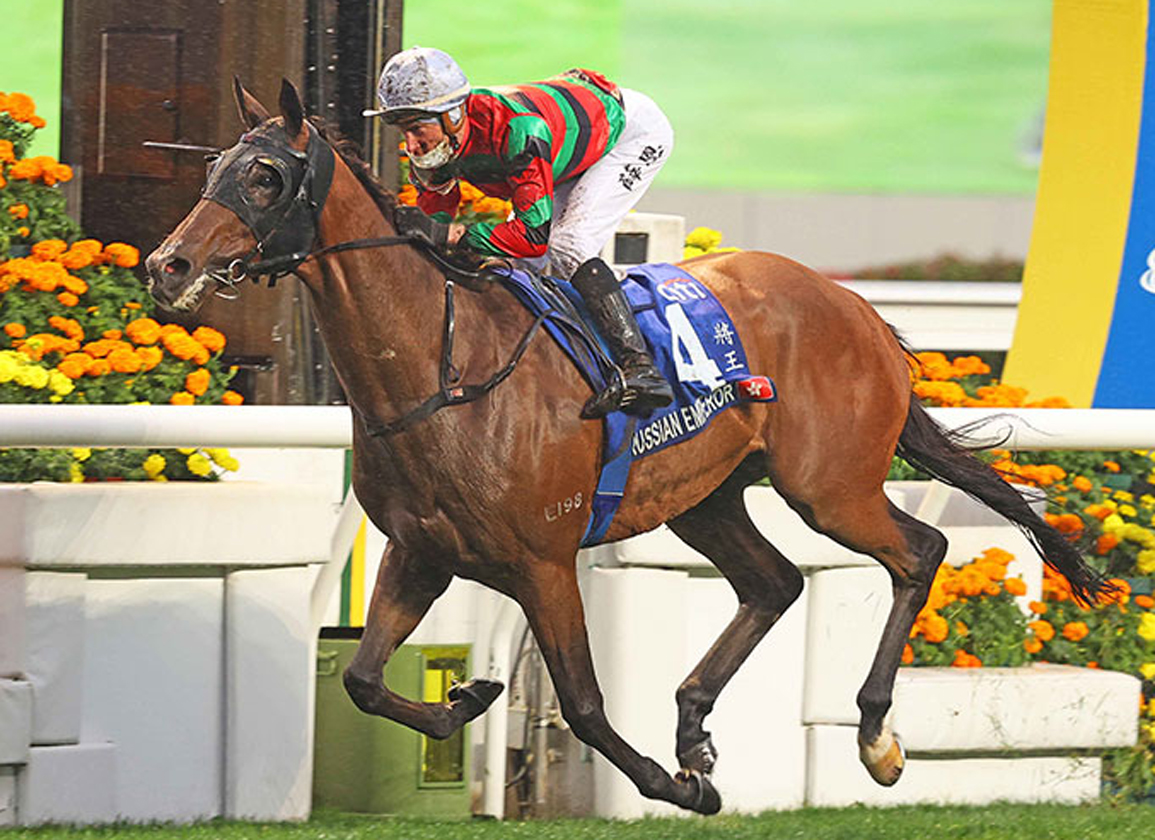 Russian Emperor (Ire) (Galileo {Ire}), the winner of the G3 Hampton Court S. at Royal Ascot in 2020, had run some mighty races since being imported into Hong Kong, but just hadn't had that breakthrough moment. On a rain-soaked Sunday afternoon where the thermometer never made it into the double digits, the 5-year-old finally stood centre stage following a bloodless, 4 1/4-length thrashing of a field that included Horse of the Year Golden Sixty (Aus) (Medaglia d'Oro) in the G1 Citi Hong Kong Gold Cup at Sha Tin Racecourse. The race was marred by a fatal injury to reigning BMW Hong Kong Derby hero Sky Darci (NZ) (Darci Brahma {NZ}), who went amiss three furlongs from home and was sadly euthanased.

Exiting a strong third–with Golden Sixty only second–in the G1 Stewards' Cup over an insufficient 1600-metre trip, Russian Emperor was the $6.50 (11-2) second-elect and raced towards the rear of the Gold Cup field in company with odds-on Golden Sixty as Zebrowski (NZ) (Savabeel {Aus}) and Reliable Team (NZ) (Reliable Man {GB}) led over turf called yielding, a rare designation in Hong Kong. Whereas Vincent Ho kept Golden Sixty out of harm's way–understandable given a somewhat luckless effort from an inside draw in the Stewards' Cup–Blake Shinn rode Russian Emperor for a bit of luck, remaining inside throughout. The two market heavies made runs in unison on the turn, with Golden Sixty clearly taking the worst of it, as Shinn weaved his way through to deliver his challenge four off the inside in upper stretch. To make matters worse for Golden Sixty, the underfoot conditions blunted his typically devastating turn of foot, and by then, Russian Emperor–previously third in last year's Derby and to Loves Only You (Jpn) (Deep Impact {Jpn}) in the G1 Longines Hong Kong Cup in December–was well and truly off and gone. Longshot Savvy Nine (Fr) (Anodin {Ire}) completed a 1-2 for trainer Douglas Whyte.

“I had a few different ideas, few different views,” the conditioner said, reflecting on pre-race game-planning. “In the parade ring, [Blake] said to me 'Do you mind if I ride the rail?' And I said 'You did that last time, you cut the corner and went in. Why would you do anything different? If you've got the horse underneath you, don't come out? It was the winning move. When you're riding with this kind of confidence in these kind of races, that's what you want. The ride made the difference.”

The connections of Golden Sixty chalked up what appeared to be another sub-par performance to Mother Nature.

“The conditions, for sure, played a part and the others just saved up all the ground,” Ho said. “He still ran well, it was still a good effort.”

Russian Emperor, who was gelded at the end of a six-race preparation last May, becomes a remarkable 93rd top-level scorer for his late sire and joins Longines Hong Kong Vase winners Highland Reel (Ire) and Mogul (Ire) as those to have achieved that success in Hong Kong.

The bay is one of two winners from three to race from his outstanding dam, twice named champion and a four-time Group 1 winner in Australia whose half-sister Commanding Jewel (Aus) (Commands {Aus}) gave their dam Regard back-to-back winners of the G1 Schweppes Thousand Guineas at Caulfield in 2012.

Atlantic Jewel is the dam of Russian Emperor's unraced 4-year-old full-sister Atlantic Emerald (Ire) and 3-year-old full-brother Fleet Commander (Ire). Her current yearling is an Australian-bred son of US Triple Crown winner Justify (Scat Daddy) that is cataloged to sell as lot 62 for the Inglis Australian Easter Yearling Sale Tuesday, Apr. 5. Atlantic Jewel sadly passed away from a hemorrhage five days after foaling that colt.

After having to take evasive action around the nasty spill in the G1 Longines Hong Kong Sprint two back and after enduring a checkered passage when fourth to Sky Field (Aus) (Deep Field {Aus}) in the G1 Centenary Sprint Prize Jan. 23, Wellington (Aus) (All Too Hard {Aus}) was back to his best Sunday, with a comfortable victory in the G1 Queen's Silver Jubilee Cup.

Settled just behind midfield as the heavily tried Californiadeepshot (Aus) (Deep Field {Aus}) dueled inside of Healthy Happy (Aus) (Zoustar {Aus}), Wellington was waited with behind horses, sprinted more quickly than Ka Ying Star (GB) (Cityscape {GB}) to his outside to take aim on the front rank at the 200 metres and kicked home nicely for a second Group 1 success. Ka Ying Star ran on gamely for second ahead of Stewards' Cup upsetter Waikuku (Ire) (Harbour Watch {Ire}), who was strung up in traffic at a crucial stage and did well to be third.

“I'm obviously pleased for the horse, just had an irritating start to the season for him,” winning trainer Richard Gibson commented. “We were lucky to have a horse after the Longines Hong Kong Sprint and all the misfortune that happened to those horses. This year, things haven't quite gone right for him and we fancied our chances today and the horse delivered.”

Gibson confirmed that Wellington will not target anything on foreign soil and will defend his G1 Chairman's Sprint Prize Apr. 24.

Mihiri is the dam of the unraced 2-year-old filly Rotorua (Aus) (Star Witness {Aus}), missed to Deep Field in 2020 and produced a full-sister to Wellington last term.