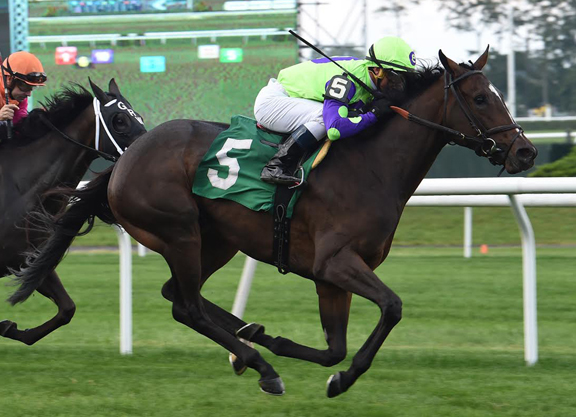 Rushing Fall solidified her status as the top 2-year-old turf filly in the country and took her record to a perfect three-for-three with a powerful performance in the GI Breeders' Cup Juvenile Fillies Turf at Del Mar Friday. Away well from the 11-hole, the crowd's second-choice bided her time in mid-pack as 37-1 shot Moon Dash (Malibu Moon) clocked early fractions of :23.04 and :47.23. Making steady progress up the outside on the back stretch run, the $320,000 FTSAUG buy ranged up menacingly down the center of the course turning for home and powered clear in the lane to provide her connections with their second straight victory in this race, following 2016 winner New Money Honey (Medaglia d'Oro). Fellow New Yorker Best Performance was second. Ballydoyle's September walked out of the gate and trailed down the backstretch, but came with a strong rally down the center of the track for third. September's stablemate Happily (Ire) (Galileo {Ire}), the 2-1 favorite, raced towards the rear and was blocked some in the lane before finishing tailed off.

“Javier [Castellano] rode a great race,” Brown said. “The key was going out of that post and getting a spot in the first half of the field which he accomplished. From there, with a nice pace in front of us, he was comfortable where he was and he moved when he felt the time was right. She has a devastating move when you turn her loose.”

“We had a little bit of a rough trip going into the first turn, but I was lucky to be able to save some ground in the first turn and then get to the outside,” Castellano said. “I had a perfect trip after that.”

Of the beaten favorite, jockey Ryan Moore said, “She took too long to find a gear and by then it was too late and there was some horses in front of her.”

Rushing Fall earned the “TDN Rising Star” nod for her ultra-impressive last-to-first victory on debut going a mile over the Belmont lawn Sept. 16. She followed suit with another dominant score going this distance in Keeneland's GIII Jessamine S. Oct. 11.

Rushing Fall is a half to stakes winner and three-time graded stakes-placed Milam (Street Sense). Her dam is also responsible for a yearling filly by Candy Ride (Arg) and was bred to Frosted this spring. Second dam Marie J. (Mr. Prospector) was graded stakes-placed, and this is also the family of GISW Albert the Great (Go For Gin).