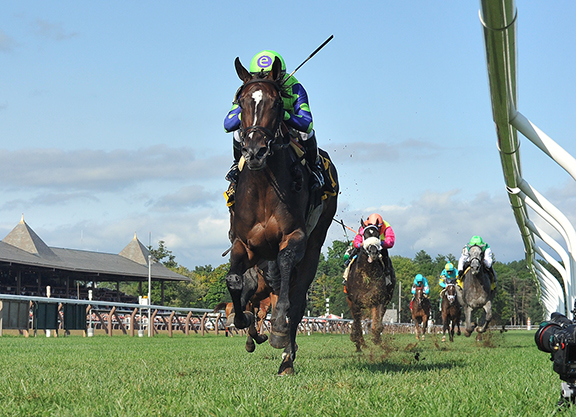 Rushing Fall more than atoned for a narrow loss last time in Churchill Downs' GIII Edgewood S. May 4 with a facile victory in Saratoga's GII Lake Placid S. Saturday afternoon. Away well under Javier Castellano, the chalk stalked longshot pacesetter Go Noni Go (Get Stormy) from second through leisurely early splits of :25.29 and :50.20. Overtaking the leader approaching the far turn, Rushing Fall effortlessly cruised clear in the lane to win as she pleased. GI Natalma S. winner Capla Temptress came running late to complete the exacta, but never posed a threat to the winner.

“She ran great,” said winning trainer Chad Brown, who also saddled fifth-place finisher Significant Form (Creative Cause). “She obviously handled the soft going well. We expected her to. Javier [Castellano] really rode a great race and adapted to the slow pace. He let her lay really close and a mile and an eighth may be a little far for her, but he really waited to push the button on her and, when he did, she really responded. I'm so proud of her.”

The conditioner added, “She got beat at Churchill a day before the [Kentucky] Derby, her first defeat, [then] shipped back home and wasn't quite right. I really wanted to run her in the [GI] Belmont Oaks [July 7], but she couldn't make it and [owner] Bob Edwards was patient and it certainly paid off today.”

As for what's next, Brown said, “I might just train her up to the [GI] Queen Elizabeth at Keeneland [Oct. 13]. There's a race in-between [GII Sands Point S. Sept. 15] at Belmont, we'll take a good look at as well.”

Rushing Fall showed her talent from the get go with a 'TDN Rising Star'-worthy debut score at Belmont in September. She made good on that distinction next out with a decisive score in Keeneland's GIII Jessamine S. in October and took it to the next level with a win in the GI Breeders' Cup Juvenile Fillies at Del Mar Nov. 3. Taking her hot streak into 2018, the bay kicked off the season with a win in the GII Appalchian over a yielding Keeneland course Apr. 8 and suffered the first loss of her impressive career when run down late by Toinette (Scat Daddy) to finish a neck second in the Edgewood on GI Kentucky Oaks day.

Darley purchased Rushing Fall's dam Autumnal for $550,000 as a KEESEP yearling and she was winless in three starts for that operation. Co-breeder Fred Hertrich bought her for $260,000 carrying a foal by Vindication at the 2007 Keeneland November Sale. Also the dam of SW & MGSP Milam, the 15-year-old mare's only produce since Rushing Fall is the unraced juvenile filly Queen Eli (Candy Ride {Arg}), purchased by Liz Crow for $210,000 at KEESEP. She has failed to get in foal each year since, most recently coming up barren after being bred back to More Than Ready earlier this term. Winning breeders Hertrich and John Fielding have been on quite a hot streak thanks to the exploits of Rushing Fall, GI Whitney S. winner Diversify (Bellamy Road) and GI Belmont Derby hero Catholic Boy (More Than Ready), who is set to run in next weekend's GI Travers S.