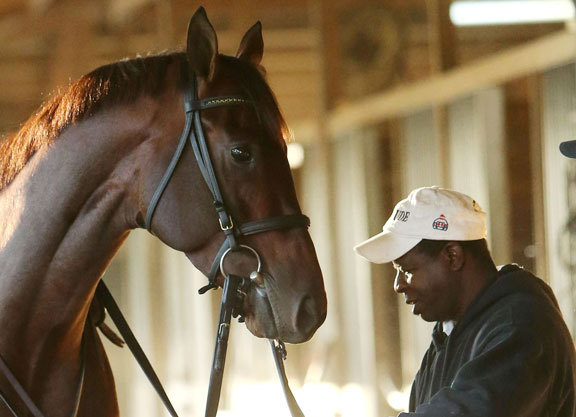 Officials at the National Thoroughbred Racing Association (NTRA) announced that the 49th annual Eclipse Award Dinner and the night's highest honor, 2019 Horse of the Year, will be sponsored by Claiborne stallion Runhappy (Super Saver), the 2015 Eclipse Award-winning sprinter.

“The Eclipse Awards are the most prestigious awards in North American Thoroughbred racing. I know because we won one for Champion Male Sprinter in 2015,” said James McIngvale, who campaigned Runhappy to three Grade I victories, including the Breeders' Cup Sprint. “It was the culmination of an unforgettable year and we are delighted that Runhappy will once again be part of a night when our sport comes together to celebrate the best in Thoroughbred racing.”

Runhappy entered stud at Claiborne in 2017 and his first-crop yearlings were received warmly by the market in 2019. According to TDN Sales Statistics, 59 youngsters sold for an average of $227,000 and a median of $200,000 last year, with a top price of $700,000 for a half-brother to Canadian champions Biofuel (Stormin Fever) and Tu Endie Wei (Johar) at Keeneland September, finishing the sale as the leading freshman sire. He topped all first-crop sires as Fasig-Tipton Saratoga at an average of $395,000 for his four sold.

“Jim McIngvale has staunchly supported the Thoroughbred industry through his sponsorship of some of the sport's most prestigious races and race meets while also making numerous charitable contributions to a variety of causes,” said NTRA President and Chief Executive Officer Alex Waldrop. “The success of Runhappy has been one of his biggest sources of pride and Runhappy's proven brilliance makes him a fitting figure to honor Thoroughbred racing's equine and human champions.”