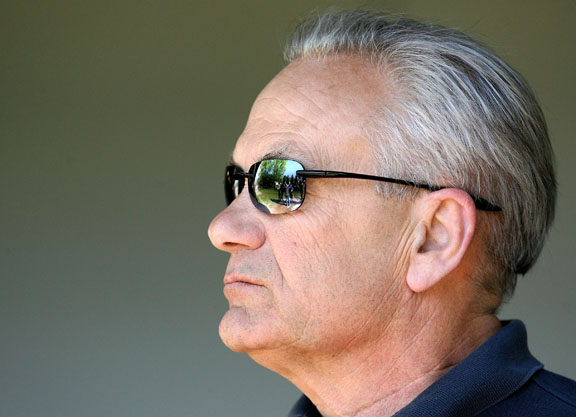 In a ruling Friday in the San Diego County Superior Court, permission was given for the name Jerry Hollendorfer to return to the Del Mar program book for the remainder of the current meet.

Judge Ronald Frazier upheld a “tentative ruling,” granting Hollendorfer and co-plaintiffs the California Thoroughbred Trainers (CTT) a preliminary injunction on the action taken by the Del Mar Thoroughbred Club, barring the trainer from stabling and entering horses under his name at the facility.

“Now I can feel free to go to Del Mar and participate in the meet down there,” said a subdued Hollendorfer afterwards, outside the court room. “I'm very grateful the judge ruled in our favor.”

When asked how soon he might resume training duties at Del Mar, Hollendorfer said, “I wasn't taking anything for granted, so, I didn't make any advance plans, but I'll be there probably Sunday to watch [owner Michael] Stinson's horses race.”

The matter isn't necessarily settled, however. Hollendorfer's attorney Drew Couto said that Del Mar could still take the matter into arbitration. If Del Mar decides to take that route, Couto emphasized the complicated logistics of timing.

“We had a window, we asked under the agreement to take advantage of that window. [Del Mar] chose not to. Now, we're going to do our best to accommodate it if that's what they want to do. But there's the realities of the schedules,” Couto said.

TDN reached out to Del Mar's attorney, Chris Jaczko, about the possibility of arbitration, but didn't heard back before publication.

For Hollendorfer, there are also the realities of a barn noticeably attenuated over the past few weeks. “I've lost an awful lot of business because of this,” he said, citing horses taken away by owners. “Some may come back and maybe none of it will. I'm not sure,” he said.

Hollendorfer has also sold horses he owned himself. “The ones I sold will stay sold,” he said, responding to questions about horse numbers lost with “quite a few–I've lost at least half my stable.”

Given the legal victory, the mood afterwards was rather somber–perhaps understandably so, given the very public way the case played out. When asked whether he believes his reputation had been damaged as a result, Hollendorfer said, “I'll leave it up to you guys. It's been very difficult getting through this. I've lost business, and I suppose some people see that in a very negative way.”

Cuoto also raised the seemingly contradictory nature of Del Mar using Hollendorfer's picture on recent promotional materials. “The cover of its current owner, trainer, jockey source book has two pictures, one of which is Mr. Hollendorfer,” he said.

“We certainly don't feel he was treated appropriately, and as the judge indicated, he didn't think so either,” Cuoto added.

Nevertheless, Jaczko tried for more than 20 minutes to argue the tentative ruling on a number of fronts, most fervently on the matter that Del Mar's decision wasn't arbitrary, but rather a “business decision” it was entitled to make given the intense scrutiny the sport is currently under.

“If there's any reasonable business justification to exclude the plaintiff, it can't be arbitrary,” he said, during the hearing. “The heightened scrutiny in California right now and throughout the country means that business as usual in California cannot happen any longer. Too many horses have died.”

In the end, the judge stuck to his original ruling, putting to bed weeks of uncertainty and unanswered questions–at least for now. In June, The Stronach Group (TSG) ordered Hollendorfer to remove his horses from Santa Anita and Golden Gate Fields after American Currency became the fourth Hollendorfer-trained horse fatally injured during the six-month Santa Anita meet. During that same period, another two Hollendorfer trainees were catastrophically injured at the organization's San Francisco facility.

Following TSG's lead, the New York Racing Association (NYRA) and Del Mar subsequently barred Hollendorfer from running horses at their facilities under his name, but opened their doors to his assistants, Don Chatlos now training owner Larry Best's horses in New York, and Dan Ward assuming the role of trainer for his Southern California string. However, no formal regulatory ruling has been metered out to Hollendorfer in California and New York.

The question is: what now? Aside from the possibility of Del Mar taking the matter to arbitration, attorney Darrell Vienna, representing the CTT, said that his organization had filed separate complaints with the California Horse Racing Board (CHRB).

In regards the first lodged complaint, Vienna said he was notified that the CHRB would submit a decision on July 26–“on this afternoon, coincidentally, at some time after the court made its decision,” Vienna said. “You can make what you want of that timing.”

TDN reached out to the CHRB for a status on the complaints but didn't receive a response before publication.

Then there's the question of Santa Anita, and what action TSG might take in regards offering Hollendorfer stalls this fall. Cuoto said that TSG had reached out about the possibility that Hollendorfer and TSG chairman and president Belinda Stronach meet to discuss the situation.

“They want Jerry to go into a meeting alone with several TSG representatives without his council present, him against however many they choose to put into a room and we frankly don't think that's an appropriate way to handle it,” said Cuoto.

TDN reached out to TSG about the proposed meeting but didn't receive a response before publication.