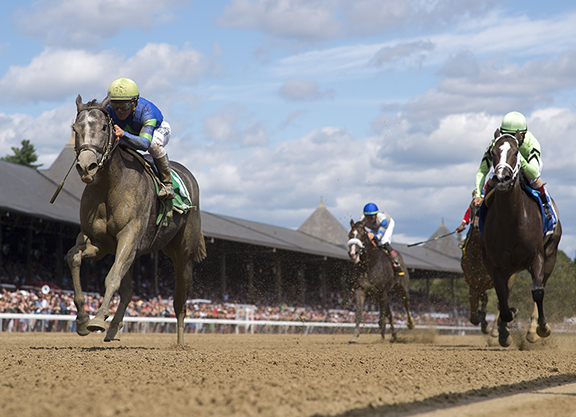 Blemished just once in six starts, First Row Partners and Parkland Thoroughbreds' Royal Charlotte (Cairo Prince) will take on a pair of promising undefeated fillies, one of which comes from her own shedrow, in an 11-horse renewal of the GII Lexus Raven Run S. Saturday at Keeneland.

Opening her account Mar. 16 with a good-looking graduation at Gulfstream, the gray repeated in a muddy local allowance Apr. 19 and annexed the Hystericalady S. in her stakes bow May 27 at Monmouth. Stepped up into graded company in the GIII Victory Ride S. July 5 at Belmont, she scored a powerful four-length triumph, but was a no-show when finished a well-beaten sixth in the GI Longines Test S. Aug. 3 at Saratoga. Back down in class slightly in the GII Prioress S. Aug. 31 at the Spa, she got back on track with a 1 1/2-length score in her typical stalk-and-pounce style. The Chad Brown trainee breaks from the tricky rail post, and will be ridden by Tyler Gaffalione for the first time.

Chief among her competition is 'TDN Rising Star' barnmate Indian Pride (Proud Citizen). Bet like a good thing at 3-5 off a strong worktab Aug. 28 at Saratoga, the Brereton Jones homebred did not disappoint, easily making the lead and taking them all the way for an eight-length romp. The bay has drilled five times since, including a pair of local half-mile breezes in :48 flat Oct. 6 and 13. Also unbeaten is First Star (First Dude), who looks to give her sire back-to-back winners of the Raven Run (Shamrock Rose, 2018). Belying odds of 27-1 to score in her 6 1/2-furlong unveiling July 20 at Del Mar, the chestnut sustained that late punch when stretching out to a mile to annex an optional claimer there Aug. 23.

Two graded stakes winners turning back in distance to this seven-furlong trip loom large as well. Three Chimneys Farm and Fern Circle Stables' Restless Rider (Distorted Humor) captured the GI Darley Alcibiades S. at this oval last fall and missed by a neck in the local GI Central Bank Ashland S. Apr. 6. Last seen running 12th in the GI Kentucky Oaks, the gray returns with a handful of sharp breezes, including an eye-popping half-mile spin in :45 3/5 (1/99) Sept. 21 at Churchill. New Jersey-bred Horologist (Gemologist), upset victress of the GIII Monmouth Oaks Aug. 17, was a solid third at 21-1 after chasing a torrid pace in the GI Cotillion S., and makes her initial start for trainer Richard Baltas after being conditioned by John Mazza for her first 11 outings.