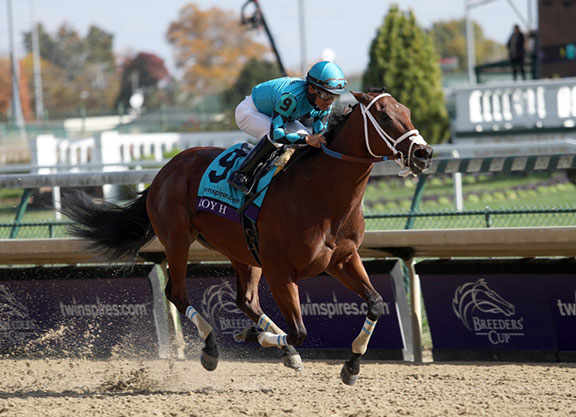 Having earlier seen their Stormy Liberal (Stormy Atlantic) successfully put them back-to-back in the GI Breeders' Cup Turf Sprint, Rockingham Ranch and David Bernsen's reigning Eclipse Award-winning sprinter Roy H (More Than Ready) will, in all likelihood, become the first short-tracker since Housebuster (1990-1991) to pick up a second consecutive divisional championship after a thoroughly dominating defense of his title in Saturday's GI TwinSpires Breeders' Cup Sprint at Churchill. Whitmore (Pleasantly Perfect), no better than a distant eighth at Del Mar, hit the line hard to be a clear second ahead of 2017 runner-up Imperial Hint (Imperialism), favored at 8-5.

Roy H looked to lunge a bit at the break, but nevertheless was the first out of the stalls, but he and jockey Paco Lopez were only too happy to ease back, as the speedy GI H. Allen Jerkens S. winner Promises Fulfilled (Shackleford) soon shot up the inside to head them off not soon after. While not entered as a rabbit for Roy H as such, fellow Rockingham/Bernsen runner Distinctive B (With Distinction)–second to Roy H in the GI Santa Anita Sprint Championship Oct. 6-did the chasing and the first two furlongs were posted in a taxing :21.35. Promises Fulfilled was under the pump outside the three-furlong pole and Distinctive B was getting right-handed encourgement from Turf Sprint winner Drayden Van Dyke, but all the while, Roy H was stalking them from out wide and was just cruising into it under his own steam. A bit wide off the final corner, Roy H overhauled Promises Fulfilled after a half-mile in :44.21, opened up passing the eighth pole and the result was never in any doubt. Whitmore, slow away, followed the inside rail for the opening four panels, came off the inside nearing the lane, was steered outside of a tiring Promises Fulfilled at the furlong grounds and finished with good energy for second. Imperial Hint found himself in some traffic down the backstretch and followed the winner into the stretch, but was no match and was just up for third.

“I loved my position early,” said Lopez, winning his first Breeders' Cup event. “I let him go a little early and he started a big move. I knew they were going fast up front. I just had a really good ride from him.”

Imperial Hint entered the Sprint with a single blemish on his record this season, a sixth as the 13-10 chalk in the GII Churchill Downs S. May 5. He ran well, but not well enough, connections said.

“Before we had a doubt if he liked the track or not,” said trainer Luis Carvajal, Jr. “He seemed like he handled it well in the morning. [Jockey] Javier [Castellano] said he was trying, but when he asked him to run, he was spinning wheels. He ran well and I'm proud of him, but it seems like he doesn't handle Churchill Downs' track very well.”

Roy H, one of 23 worldwide Grade I/Group 1 winners and one of 190 black-type winners for his WinStar-based sire, and is out of a mare who did her best work at sprint distances, winning the GIII Las Cienegas H. and GIII Railbird S. while finishing third in the GI La Brea S. Elusive Diva is a half-sister to Tropics (Speightstown), a Group 3 winner and twice runner-up in the prestigious G1 Darley July Cup. Second dam Taj Aire is also responsible for MSW R. Baggio (Chimes Band) and SW Handyman Bill (Skywalker). A $110,000 Keeneland September yearling turned $310,000 Keeneland April 2-Year-Old, Roy H is kin to the 2-year-old filly Vinca (Oxbow) and a yearling colt by English Channel. Elusive Diva, who was purchased for $75,000 by Calumet Farm in foal to Algorithms at Keeneland November in 2013, was most recently bred to Mr. Z.