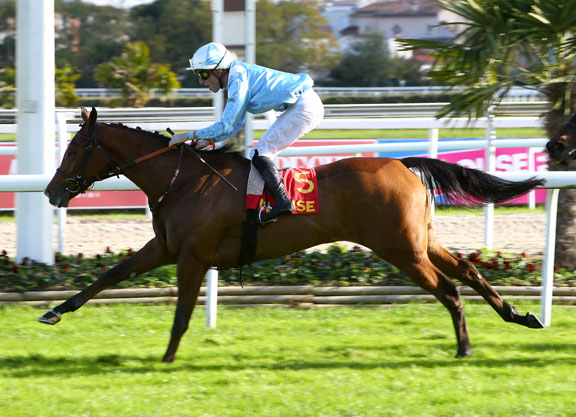 Deauville stages the first of its August features on Sunday, with the fillies and mares granted the opportunity to strike at the highest level in the G1 Prix Rothschild. Alexander Tamagni-Bodmer and Regula Vannod's Watch Me (Fr) (Olympic Glory {Ire}) sets the standard, having won last year's G1 Coronation S. and finished third in the G1 Prix de l'Opera and she looked primed for another big effort when taking the course-and-distance Listed Prix de la Calonne on July 12. Trainer Francis-Henri Graffard is expecting a bold show. “She is in great form and has improved a lot since her seasonal comeback three weeks ago,” he said. “It's a Group 1 and they are always hard to win, but I could not be happier with her condition.”

Watch Me meets Godolphin's 'TDN Rising Star' Summer Romance (Ire) (Kingman {GB}), who put up a markedly-improved performance when taking Epsom's G3 Princess Elizabeth S. over an extended mile on July 4. Enjoying the run of the race there, she still managed to beat three classy fillies in Cloak of Spirits (Ire) (Invincible Spirit {Ire}), Rose of Kildare (Ire) (Make Believe {GB}) and Onassis (Ire) (Dubawi {Ire}) and Charlie Appleby is hoping she can build on that confidence boost. “We were very pleased with the performance of Summer Romance at Epsom and she came out of the race well,” he said. “She made the running there, but doesn't have to go from the front–it wasn't the plan to make it last time out but nobody else wanted to go on, so we took the bull by the horns. We feel that this is a good opportunity to hopefully step up to Group 1 level.”

Another who is looking to make a jump forward is Qatar Racing Limited's July 1 G3 Derrinstown Stud Fillies S. scorer Know It All (GB) (Lord Kanaloa {Jpn}), but the manner of her success in that Leopardstown mile contest suggests she can make an impact. Trainer Johnny Murtagh said, “She's going there in great form, hopefully. Sheikh Fahad picked this race out and I'm glad he did because it's a fillies' only Group 1 with six runners. There are obviously some good ones in it.” One of those is Rashit Shaykhutdinov's G1 Poule d'Essai des Pouliches runner-up Speak of the Devil (Fr) (Wootton Bassett {GB}), who is back over a mile having failed to stay the 10 1/2-furlong trip of the G1 Prix de Diane at Chantilly on July 5. She is probably still underestimated and this could be her chance to make amends for her unlucky defeat in the June 1 Classic here.

In the G3 Darley Prix de Cabourg, which has been won in recent times by Dabirsim (Fr) (Hat Trick {Jpn}), Ervedya (Fr) (Siyouni {Fr}) and Earthlight (Ire) (Shamardal), the 2-year-olds get a chance to prove worthy of a tilt at the upcoming G1 Prix Morny over the same six-furlong trip. There does not look to be an Earthlight among the domestic contingent this year and, as ever, there is a strong British challenge via the July 18 Listed Rose Bowl S. runner-up Mighty Gurkha (Ire) (Sepoy {Aus}) and the unbeaten Cairn Gorm (GB) (Bated Breath {GB}).

At Dusseldorf, there is Classic action with the 162nd renewal of the 11-furlong G1 Henkel-Preis der Diana seeing a formidable collection of foreign raiders. Francis-Henri Graffard has already taken one of Germany's Classics after In Swoop (Ire) (Adlerflug {Ger}) caused an upset in the G1 Deutsches Derby and is back again with another import from this country in Tickle Me Green (Ger) (Sea the Moon {Ger}). Third in the G3 Prix de la Grotte at ParisLongchamp on May 11 and ninth in the G1 Poule d'Essai des Pouliches at Deauville on June 1 when under the care of Andre Fabre, Gestut Gorlsdorf's homebred made her debut for Graffard a winning one in the Listed Prix Madame Jean Couturie over 10 furlongs at Vichy on July 20.

Gary Barber and Team Valor International's Silence Please (Ire) (Gleneagles {Ire}) beat her stablemate and subsequent G1 Nassau S. runner-up One Voice (Ire) (Poet's Voice {GB}) in the 10-furlong Listed Salsabil S. at Navan on June 10 before finishing third behind Even So (Ire) (Camelot {GB}) under a penalty in the July 4 Listed Naas Oaks Trial. That form may be good enough in this context with no stand-out among the German brigade. One of the least exposed of them is Gestut Wittekindshof's Elle Memory (Ger) (Maxios {GB}), the Peter Schiergen-trained daughter of the prolific Elle Danzig (Ger) (Roi Danzig) who captured this in 1998 when it was a Group 2. The second dam of Saturday's Listed Chalice S. winner Katara (Fr) (Deep Impact {Jpn}), her Shamardal filly Elle Shadow was second in this in 2010. Although it would make a nice story if Elle Memory is to go one better, she has to progress some way from her narrow defeat of Sister Lulu (Ger) (Jukebox Jury {Ire}) in the 10 1/2-furlong Listed Preis Dusseldorf on June 21.