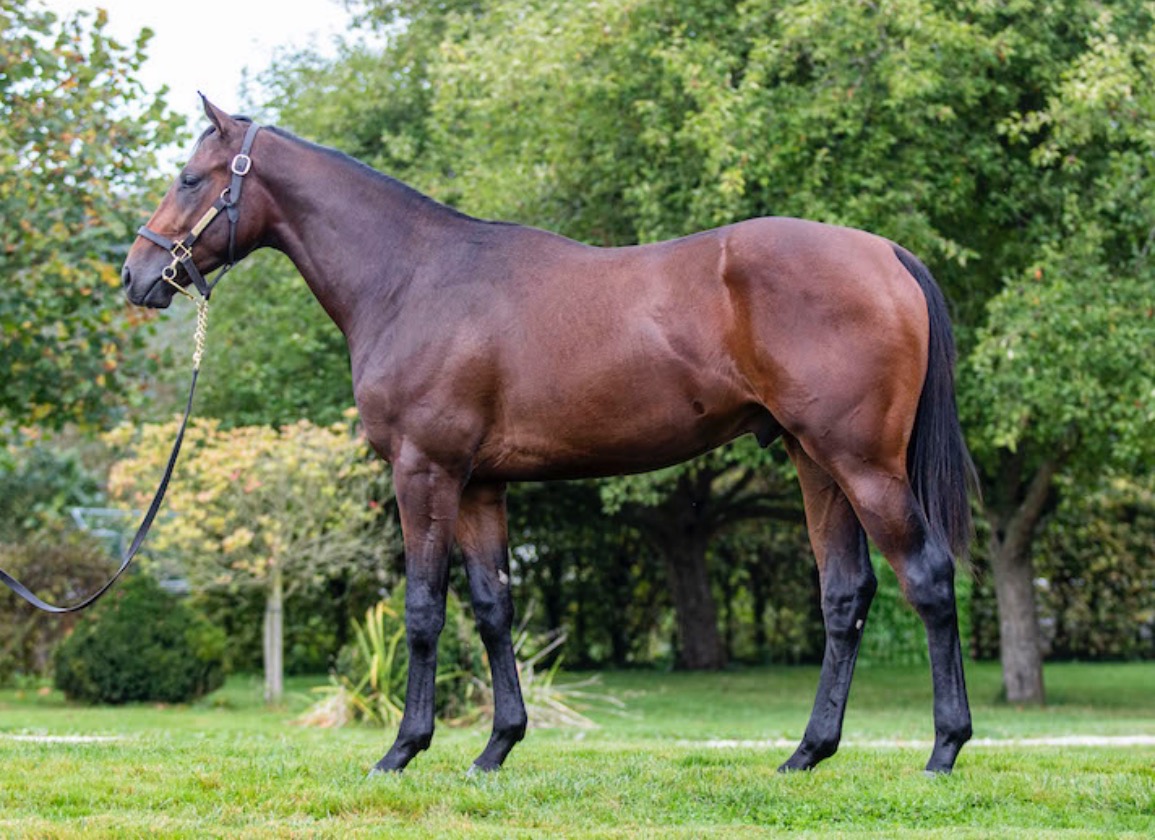 The session-topping colt by the late Elusive City

DEAUVILLE, France–In weather that wouldn't have felt out of place for Arqana's August Sale, the sales ground in Deauville was bathed in warm sunshine on Tuesday while trade in the ring continued to be similarly encouraging.

There was a time when Elusive City, at €15,000, was the most expensive stallion at stud in France. Much has changed in the intervening decade and the former Haras d'Etreham stallion was lost to the local breeding industry when suffering a heart attack in 2019 after standing ten seasons in France. But he was remembered at Arqana on Tuesday when a member of his final crop provided one of the highlights of the second session. The colt out of the Allied Forces mare Forces Sweetheart brought a bid of €150,000 from Paul Harley which was enough to lead the second session of the five-day sale.

As a full-brother to G3 Prix Paul de Moussac winner National Service (Fr), the colt had plenty to recommend him on paper but it was his physical attributes that swayed Harley in favour of lot 252, as well as the lure of the €200,000 Criterium de la Vente de Yearlings d'Octobre Arqana.

He said, “I just thought he was one of the best horses today. He looks an athlete, a racehorse, with a good mind. His full-brother won as a 2-year-old and I suppose we will always have in the back of our minds the Arqana sales race on Arc weekend. It would be nice to have a run before then in September.”

Harley added, “It's not yet decided where he will be trained but he will stay in France.”

It was a good day for Anna Sundstrom of Coulonces, who consigned the colt and three of the six highest-priced yearlings of the session, including lot 253, a first-crop son of Coolmore freshman Sioux Nation, who sold for €87,000 to Marco Bozzi.

With a changed sale format over the last two years, since when the October Sale has been extended to five days, it is hard to make reliable comparisons on figures. But drawing a direct line to last year's sale, held just before France was plunged back into an extended lockdown, plenty of improvement in the trade is shown 12 months on. The aggregate of €3,865,500 was up by 25%, while the average rose by 39% to €36,814. The median improved from €20,000 to €29,000 and the clearance rate of 83.3%, from 105 of the 126 lots sold, was almost identical to 2020.

Christophe Ferland will take charge of Jedburgh Stud's smart daughter of Iffraaj (GB) (lot 258) on behalf of Swedish owner Finn Blichfeldt, who has enjoyed success on the track in France this year with juvenile winner and listed runner-up Hot Queen (Fr) (Recorder {GB}). Blichfeldt also breeds in the country under the name AB Ascot.

Ghislain Bozo went to €140,000 for the owner/breeder to secure the first foal of Gaviota (Fr) (Rio De La Plata). The dependable Iffraaj has already worked well with the family as the mare is a half-sister to his son and Group 3 winner Dibajj (Fr). The further family also includes the King's Stand S winner Chineur (Fr), as well as the G1 Prix du Jockey Club runner-up The Summit (Fr), by Iffraaj's son Wootton Bassett (GB).

“She's very racy, with a lot of quality,” said Bozo. “The family has a lot of speed and she will one day have a good profile for a broodmare. Christophe Ferland will train her for my Scandinavian client AB Ascot.”

Roughly an hour after Carlos and Yann Lerner had provided Almanzor (Fr) with his first black-type performer in the G3 Prix des Reservoirs runner-up Queen Trezy (Fr), the father-and-son training team was in action at Arqana and bought a yearling by the same sire for €130,000. Lot 242 is the second foal of Et Toi Et Moi (Fr) (Footstepsinthesand {GB}), a winner at three for Jean-Claude Rouget and out of a half-sister to five black-type winners.

Al Wukair (Ire), Haras de Bouquetot's son of Dream Ahead, has sired more winners than any other freshman sire in France this season with eight to his name, and one of his second-crop daughters ended up among the six-figure yearlings on Tuesday when sold for €110,000 to Mandore International and John Hammond.

The half-sister to listed winner Mouillage (Fr) (Toronado {Ire}) is out of the Cape Cross (Ire) mare Hazely (GB) and was consigned as lot 270 by Normandie Breeding. She will race in partnership for Al Shaqab and Gerard Augustin-Normand.

Al Wukair's stablemate Zelzal (Fr), by Sea The Stars (Ire), has also made a promising start with his first runners this year, with his six winners headed by the treble scorer and listed victrix Zelda (Fr). At Arqana over the last two days, five of his yearlings have sold for an average of €94,800, with David Redvers having bid €170,000 on Monday for a half-sister to listed winner Bebeautiful (Fr) (Le Havre {Ire}) from Haras d'Haspel, the breeder of Native Trail (GB).

The G3 Prix des Reservoirs, run at Deauville an hour before the start of Tuesday's sale, was won last year by subsequent G1 Qatar Prix de l'Opera winner Rougir (Fr) (Territories {Ire}), who, with Sealiway (Fr) (Galiway {GB}), has provided two Group 1 winners in a fortnight for the Haras de la Gousserie and trainer Cedric Rossi. The result of this year's race had a bearing on the October Sale as Wednesday's session features a half-sister to the winner Rosacea (Fr) (Soldier Hollow {GB}) as lot 377, who is set to sell in the first half-hour of trade at around 2:30pm. The daughter of Tamayuz (GB) is consigned by her breeder Haras de la Perelle and is out of a winning Zamindar half-sister to the GI EP Taylor S. winner Reggane (GB) (Red Ransom).