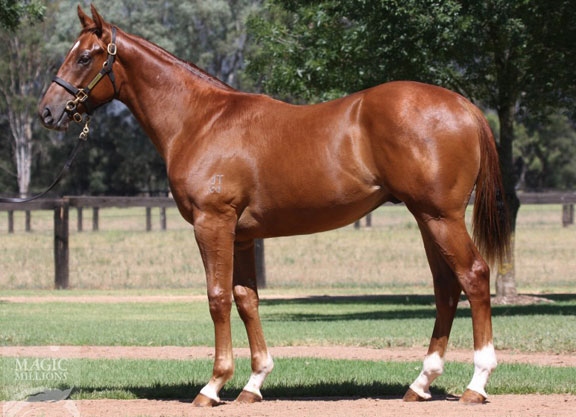 It was a busy Friday morning at Rosehill Gardens, as the track hosted no fewer than 18 barrier trials, and there was no more successful collaboration than that of Team Hawkes and jockey Tommy Berry. They teamed to win three of the trials, while Berry added a fourth for trainer Michael Freedman.

Perhaps the star of the morning was the 2-year-old colt Eden Roc (Aus) (Star Witness {Aus}), an A$750,000 purchase from the Widden Stud consignment at the 2016 Magic Millions Gold Coast Yearling Sale who quickened home to take the day's seventh trial (900m) by 3 1/4 lengths in :53.90. Alertly away, Eden Roc set a pressured pace before swatting away his rival en route to a facile success before galloping out with good energy (video). Eden Roc is out of a half-sister to Bell's GSW & G1SP Star Turn (Aus) (Star Witness {Aus}), who will stand at Vinery upon completion of his racing career, it was announced this week. Team Hawkes and Berry were also represented by Spendthrift Australia's 3-year-old colt Spirit and Fire (Aus) (More Than Ready) in trial 12 (video) and the sophomore filly Fleur (Aus) (Not a Single Doubt {Aus}) (video) in the following heat.

Trainer Michael Freedman accounted for a pair of the morning's 2-year-old trials. Berry was in the irons for trial six for fillies which was won in impressive fashion by Yu Long Investments et al's Yulong Xingsheng (Aus) (I Am Invincible {Aus}), who was outsprinted through the first three furlongs, but leveled off beautifully in the final 200 metres to win the trial by 3/4 of a length (video). An A$37,500 Magic Millions National Weanling purchase, the October foal fetched A$55,000 at the Inglis Sydney Classic yearling sale. Yzerman (Aus) (Uncle Mo), an A$36,000 purchase from the Classic sale, took out heat number eight, holding off a strong late bid from Newburgh (Aus) (All Too Hard {Aus}) (video).

Corumbene Stud's 2-year-old colt Menari (Aus) (Snitzel {Aus}) recorded his second win in a trial in the space of 10 days at the midpoint of Friday's flurry of activity. Trained by Gerald Ryan, the flashy bay was soon in front while taking some heat to his outside from Travers (Aus) (Exceed and Excel {Aus}). Menari cut the corner into the stretch and raced away to score by 3 3/4 good-looking lengths (video). China Horse Club's San Marco (Aus) (Smart Missile {Aus}) touched Travers out of second, while Merovee (Aus) (Frankel {GB}), the son of MGSW & G1SP More Strawberries (Aus) (More Than Ready), missed the break and finished with some interest to be fourth. Travers topped the 2015 Inglis Great Southern Weanling Sale on a bid of A$300,000, then fetched A$800,000 as a Gold Coast yllearling. He is owned in part by and carried the colors of Hong Kong trainer John Moore, who will race the colt with China Horse Club, Newgate Stud Farm, Aquis Farm and WinStar Farm.

Making her first trip to the trials, Divine Messenger (Aus) (Star Witness {Aus}) gave her sire his second winner on the morning in trial number five. Trained by Tony Gollan and ridden by Blake Shinn, the chestnut came through to take up the running after about 100 metres, was taken on by Lipizzan (Aus) (Sebring {Aus}) inside the final furlongs and sprinted well to take it by 1 1/4 lengths (video). Divine Messenger, a daughter of SW & G1SP Ladys Angel (Aus) (Arena {Aus}), was an A$80,000 graduate of the 2016 Magic Millions Gold Coast sale, where she, too, was consigned by Widden Stud.

The veteran Straturbo (Aus) (Stratum {Aus}) got the morning off on a winning note for trainer Gary Portelli and earned himself a shot at the Magic Millions Sprint with a handy success over 1030m. Sent immediately into the lead by jockey Deanne Panya, the 7-year-old, recent winner of the Listed Bribie H. at Doomben, was under a stranglehold in the lane, but nevertheless streaked in by 4 1/2 lengths (video). Another Widden Stud grad, Straturbo, winner of the MM Sprint in 2015, was knocked down for A$45,000 at the 2011 Magic Millions National Yearling Sale.