Rosario to Ride Rock Your World in Derby 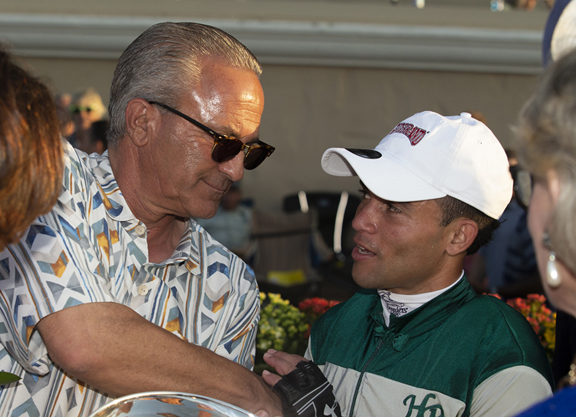 Jockey Joel Rosario will replace Umberto Rispoli on unbeaten GI Runhappy Santa Anita Derby hero Rock Your World (Candy Ride {Arg}) in the GI Kentucky Derby. The decision came after it was announced that Bob Baffert trainee Concert Tour (Street Sense), who Rosario had ridden in each of his four starts, would skip the Derby and opt for the GI Preakness S.

Rosario rode Rock Your World in his turf sprint debut win at Santa Anita Jan. 1, but Rispoli was up for both the Pasadena S. and Santa Anita Derby. Rosario has had significant success riding for Rock Your World's trainer John Sadler and co-owner Hronis Racing, including with 2018 Horse of the Year Accelerate (Lookin At Lucky).

“Let's be very clear here, I was rooting for [Bob Baffert's] Concert Tour to win the [Apr. 10 GI] Arkansas Derby and [then] this is all a non-conversation,” Sadler said on the “Thoroughbred Los Angeles” radio show Sunday morning. “We decided to wait until after the Concert Tour race to see what was going to happen and nobody could've predicted that (a third-place finish), really. I mean, he was 1-5 or whatever and then he didn't run on.

“So, when Joel came available…You know, these are agonizing decisions and not easy. I want to be very clear, I think the world of Rispoli and I think the world of his riding. He's a terrific rider on our circuit and he's been a great addition to California and will continue to be. But, I had to make a call and this is the call I made… History will tell whether I'm right or wrong. Things could go bad, you know, overnight in this game, but this is the decision we made for this race, so you know, we have to live with it and go forward.

“We think with [Joel's] experience over the track… And just my relationship with him and these owners (Hronis Racing LLC and Talla Racing LLC)… this gives us our strongest position. So, this is what we're going to do.”

Sadler said that Rock Your World would ship to Louisville on Sunday, Apr. 26.