Rosario Roll Continues With Kimari in the Madison 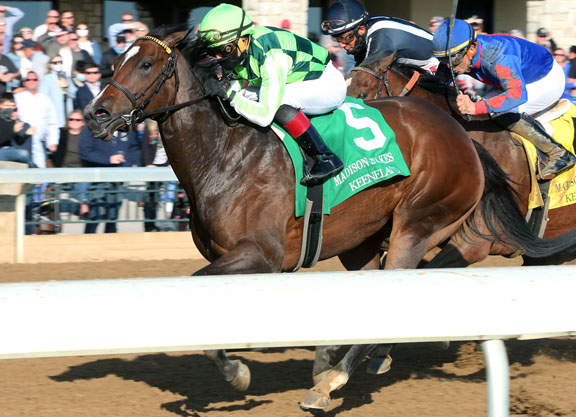 The temperatures were on the cool side Saturday in Central Kentucky, but jockey Joel Rosario was hot. As in en fuego. The Dominican sensation had ridden, in succession, Flagstaff (Speightstown) to victory in the GIII Commonwealth S.; Bound For Nowhere (The Factor)–who was drawn somewhere in the middle of Versailles Road–to win the GII Shakertown S.; and produced 'TDN Rising Star' Malathaat (Curlin) at just the right time to snatch the GI Central Bank Ashland S. Rosario completed a spectacular stakes four-timer in the day's penultimate race, riding Ten Broeck Farm's 'TDN Rising Star' Kimari (Munnings) to absolute perfection in the GI Madison S.

Not always the quickest away from the stalls, the $152,000 Fasig-Tipton July yearling jumped well–indeed, almost too well–as she raced freely through the early stages while tracking second favorite Mundaye Call (Into Mischief) through an opening quarter-mile in a modest :22.90. Stalking the Audubon Oaks winner into and around the turn, Kimari claimed that one under a hold at the three-sixteenths marker, was asked for more speed entering the final furlong and was more or less ridden hands-and-heels to the victory. Estilo Talentoso (Maclean's Music) bid three wide in upper stretch and stayed on nicely to dead-heat for second with Bell's the One (Majesticperfection).

“She broke better than she usually does, which put her right into the race,” said trainer Wesley Ward, who also saddled Bound For Nowhere earlier in the day. “On paper, there really wasn't a lot of speed up front. Everything went our way. As soon as she turned for home, [Rosario] started riding her. I was a little worried the last part; I wasn't sure seven-eighths is really her game. But this is her track, and this guy [Rosario] is on fire. So we had all the luck with us today.”

Named a no-brainer 'Rising Star' when galloping home a 15-length winner on debut over this main track two years ago, Kimari was a dual stakes winner sprinting on the turf that season, then won the Purple Martin S. on the dirt at Oaklawn before finishing a bang-up second against the boys in the G1 Commonwealth Cup at Royal Ascot last June. Rested off a slow-starting third in the Sept. 15 Music City S. at Kentucky Downs, she returned to the main track to romp by 4 1/4 lengths in a sloppy-track renewal of the Spring Fever S. in Hot Springs Feb. 27.

Kimari is the 19th graded winner for Munnings and joins A.G. Vanderbilt H. hero El Deal and Cotillion S. and Delaware H. victress I'm A Chatterbox as his Grade I winners. Kimari's dam was herself a Grade III winner, having annexed the Chicago H. at this same seven-furlong distance in 2013, and was purchased by China Horse Club for $300,000 at the 2014 Fasig-Tipton November Sale. The dam of the 2-year-old colt Imola (Quality Road), Cozze Up Lady was barren to Always Dreaming for 2020 and foaled a Constitution colt this past Feb. 15.