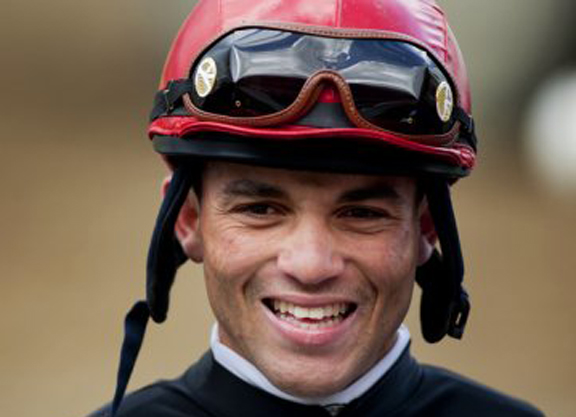 Jockey Joel Rosario, who leads North America with 20 stakes wins this year, was fined $200 for misjudging the finish wire aboard a 9-5 favorite who lost an Apr. 10 stakes race by a nose at Oaklawn Park.

Rosario piloted Rushie (Liam's Map) in the $400,000 Oaklawn Mile S., but apparently forgot races at that distance at the track end at the sixteenth pole and not the traditional finish line.

Rushie had seized the lead off the turn and was getting reeled in by a fast-closing By My Standards (Goldencents) as the sixteenth-pole finish loomed.

By My Standards seemed to have the winning momentum regardless of where Rosario thought the wire was, but the head-on replay reveals that Rosario was still driving Rushie while Gabriel Saez rose in the saddle aboard By My Standards.

The two jockeys appeared to speak while galloping out on the far turn, with Saez reaching out left-handed to give Rosario a seemingly friendly post-race tap on the right shoulder.

The ruling was issued Sunday by the Oaklawn stewards.

This story was posted in Top News and tagged By My Standards, Joel Rosario, Oaklawn Mile Stakes, Oaklawn Park, Rushie.