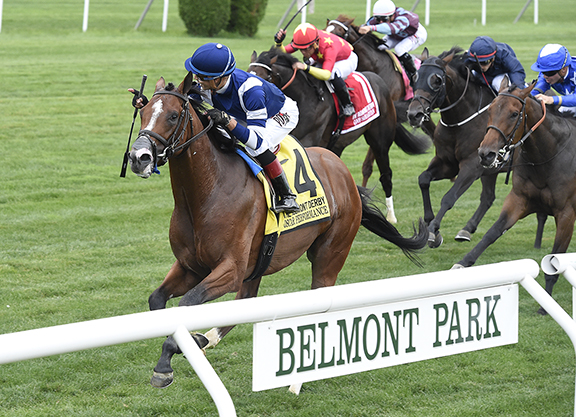 After a battery of tests performed at Rood & Riddle Equine Hospital found nothing wrong with Oscar Performance (Kitten’s Joy)–who was pulled up in last Saturday’s GI Arlington Million–the horse will soon resume training at Saratoga for trainer Brian Lynch.

With the latest news, what happened to Oscar Performance in the Million remains somewhat of a mystery. The 9-5 favorite was third early, but started to fade in the stretch and then was pulled up before the wire by jockey Jose Ortiz and vanned off the track.

“He had a tough trip,” Amerman said. “He was off a step slow and then got banged around a bit. When Jose got off the horse he told us he thought he sensed him take a couple bad steps and thought precaution was the better part of valor. That’s why he pulled him up.”
The 4-year-old was sent from Arlington to Rood & Riddle, where Dr. Larry Bramlage and his team were unable to find anything wrong with the colt.

“Dr. Bramlage first looked at him Tuesday morning and said he was perfectly sound,” Amerman said. “But he still wanted to do a bone scan, which was done [Wednesday] and look at the results of that. Again, there was nothing there.”

While Amerman obviously would have rather won the Arlington Million and not had to endure a scare, he said he was thrilled that his horse was ok.

“I feel so blessed that this all worked out and that he’s going back into training,” he said. “Something must have happened, but we don’t know what and he’s no worse for the wear. He’ll soon be back in the capable hands of our trainer Brian Lynch and he’ll get him back into training as soon as he can. I am so pleased that there was nothing seriously wrong with him. Oftentimes in this business, you don’t get such good news. Everything worked out fine and I am bubbling over.”

Amerman said he and Lynch had not decided yet where Oscar Performance would run next. The GI Breeders’ Cup Turf is an obvious end-of-season goal.

Oscar Performance is slated to retire at the end of the year and stand at Mill Ridge Farm. He has won six graded stakes, including three at the Grade I level-the Belmont Derby Invitational, Breeders’ Cup Juvenile Turf and Secretariat S.