Ronnie Franklin Passes Away at 58 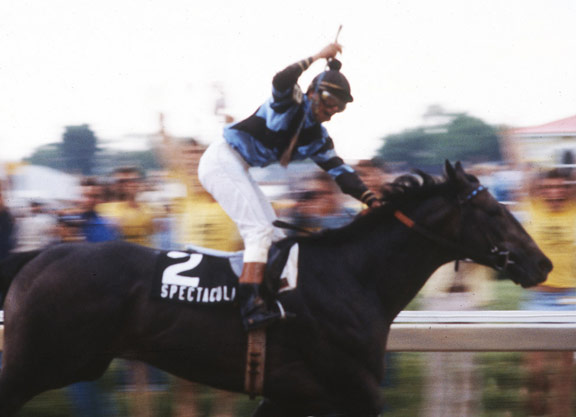 Jockey Ronnie Franklin, who piloted Hall of Famer Spectacular Bid to victories in the 1979 GI Kentucky Derby and GI Preakness S., died Thursday at age 58 after a battle with lung cancer.

The Baltimore native dropped out of high school at age 16 and showed up at the barn of Hall of Famer Buddy Delp, who took Franklin in and gave him a job despite his lack of horse experience. Delp sent him to a training center in Virginia to learn to ride, which is where Franklin met Spectacular Bid.

Franklin guided “Bid” to seven wins in 1978, including the GI Champagne S. and GI Laurel Futurity, a campaign that earned them both Eclipse Awards. Franklin, who was just 18 at the time, was named Outstanding Apprentice Jockey and Spectacular Bid took home the trophy as the year’s top 2-year-old colt.

The dynamic duo went on a hot streak in 1979, capturing the Hutcheson S., GIII Fountain of Youth S., GI Florida Derby, GI Flamingo S. and GI Blue Grass S. prior to winning the first two legs of the Triple Crown. Their win streak came to an end in the GI Belmont S., however, when Franklin gunned Spectacular Bid out of the gate and the champion faded to third in what was a very controversial ride.

Delp replaced Franklin with Hall of Famer Billy Shoemaker after the Belmont and Spectacular Bid went on to win two more Eclipse Awards and a several graded events. Franklin continued to ride races and while he won a few more graded stakes, he never won another Grade I or rode another horse of Spectacular Bid’s caliber.

Franklin battled with a well-documented drug addiction after losing the mount on Spectacular Bid and in 1992 when his license was revoked by the Maryland Jockey Club. He made several requests for reinstatement, which were denied, and he retired with 1,403 wins from 9,242 starts and earnings of $14,055,722. Franklin continued to gallop horses in the morning at various training centers until his diagnosis, his nephew and former jockey Walter Cullum told the Baltimore Sun.

Franklin is survived by his mother, brother and four sisters. The family will hold a private service.