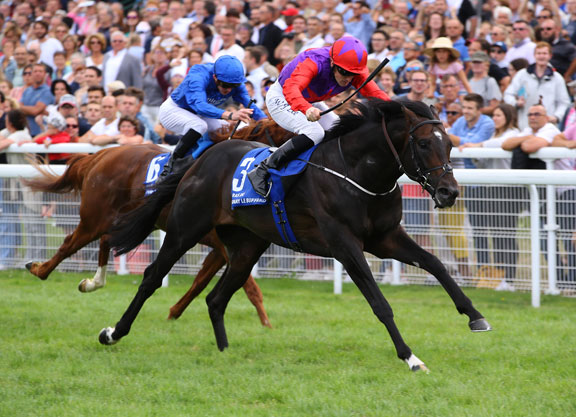 Classic winner Romanised (Ire) (Holy Roman Emperor {Ire}-Romantic Venture {Ire}, by Indian Ridge {Ire}) has been retired from racing and will enter stud in 2021 at Haras de Bouquetot in Normandy, France, for a fee of €7,000.

Campaigned by Robert Ng and trained by Ken Condon, Romanised won at first asking in April of his 2-year-old campaign and was second to eventual G1 Derby winner Masar (Ire) (New Approach {Ire}) in the G3 Solario S. that fall. He sprang a 25-1 upset when beating US Navy Flag (War Front) in the G1 Irish 2000 Guineas, and though he went winless in three subsequent starts that year he bounced back in 2019 to win the G2 Minstrel S. and the G1 Prix Jacques le Marois and was beaten a nose by Circus Maximus (Ire) (Galileo {Ire}) in the G1 Prix du Moulin. Romanised defended his title in the Minstrel this July.

Condon said, “From when he first commenced fast work in the spring of his 2-year-old year, Romanised showed that precocity, speed and class that were the hallmarks of his racing career. His biggest attributes were his superior cruising speed and an electric turn of foot. Coupled with his impeccable physique, Romanised is possessed of many of the prerequisites to be a success at stud.”

Haras de Bouquetot Stud Manager Benoit Jeffroy added, “We're delighted to be given the opportunity to stand a dual Group 1-winning miler with such eye-catching looks as Romanised, who will be a valuable addition to the Al Shaqab stallion roster at Haras de Bouquetot for the 2021 season. He is a well balanced horse, with strong hind quarters, a great athleticism and good muscle definition. For a horse matching performances, pedigree and looks, his stud fee of €7,000 Live Foal should prove a great value to the European breeders.”