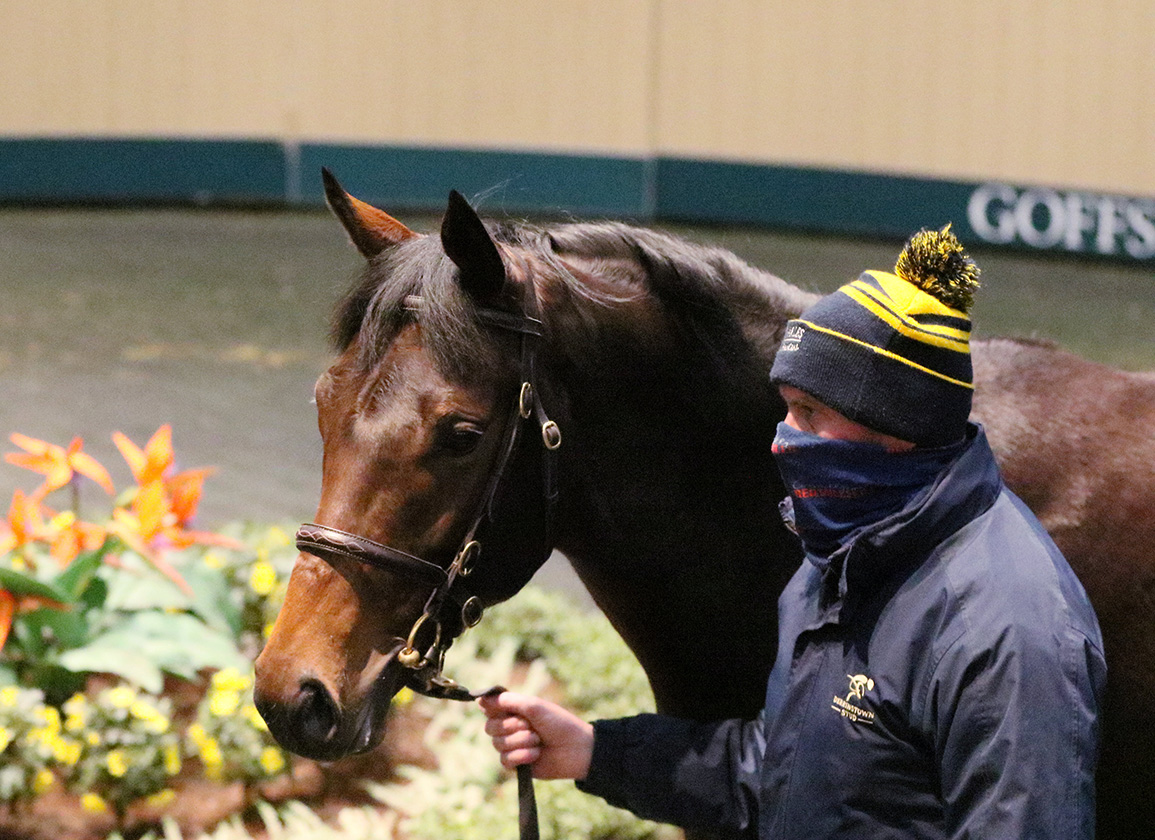 KILDARE, Ireland–A dreich day may have tried its hardest to dampen the spirits, but there was an altogether warmer feel to proceedings in the ring as the sales season sparked into action in Ireland with a bumper mixed catalogue at Goffs.

Extended to three days, with around 600 horses slated to sell, it is tricky to make direct comparisons with smaller and Covid-interrupted sales of previous years, but a healthy median of €10,000, average of €20,235, and turnover of €2,124,700 from 105 horses sold (64%) should be regarded as a decent start to a sale which cleared a little over €4 million in two days just before the pandemic struck two years ago.

Roughly half the horses catalogued for the February Sale have just become yearlings, and a full session of the class of 2021 will be offered on Wednesday, but of those taking their turn during the opening day, it was an AQPS 4-year-old hurdler who topped the list at €150,000.

The Irish-based racing syndicate All About Sunday is making a first foray into the UK and will be represented by the wild card 27B, a Great Pretender (Ire) gelding named Invincible Power (Fr).

“He will be trained by Donald McCain and will be our first horse in training in England,” said All About Sunday founder Darren McGrath. “He seems to have a great temperament, he's a really relaxed horse, with size and scope. His form in France is pretty good and everyone is chasing the French horses.”

Following two placed starts in the French provinces, the Pascal Noue-bred relation to Grade 1-winning hurdler Cilaos Emery (Fr) (Califet {Fr}) was consigned to Goffs by Derryluskin Stud and will now head to Cheshire to join the in-form McCain stable, which was the first to reach the 100-winner mark this jumps season.

A 2-year-old son of Teofilo (Ire) (lot 99) from Shadwell's Derrinstown Stud draft headed the Flat-bred offerings, and the grandson of the dual Grade I winner Fleet Indian (Indian Charlie) will be heading to Jim Bolger's Coolcullen stable after being knocked down to his grand-daughter Clare Manning's Boherguy Stud for €135,000. As the breeder and trainer of Teofilo, Bolger is of course no stranger to the stallion, and he has bred and/or trained six of Teofilo's 22 Group 1 winners. His latest acquisition, out of the dual winner Fleeting Smile (Distorted Humour), has plenty of well-credentialed relations, including American champion 2-year-old Game Winner (Candy Ride {Arg}) and his fellow Grade I winner Flagstaff (Speightstown), both of whom are out of a half-sister to Fleeting Smile.

A Shadwell-bred Teofilo 2-year-old was on the shopping list of Patrick Prendergast, who went to €80,000 for lot 52, a daughter of the Group 3 and Listed-placed Reyaadah (GB) (Tamayuz {GB}) who is already a stakes producer via her Listed-placed daughter Tamreer (GB) (New Approach {GB}).

As the yearlings took to the ring, it was a member of the first crop of Ballylinch Stud's Waldgeist (GB) (lot 160) who commanded the highest price, with the son of the dual Listed winner Modeeroch (Ire) (Mozart) fetching €85,000 when sold to Ronald Rauscher. The agent confirmed that the Ballylinch-bred youngster, from the family of champion 2-year-old Belardo (Ire), had been bought to race for a German owner.

Weanlings by the Arc winner fared well at the Goffs November Sale, with nine sold for an average a little in excess of €54,000. Another two sold on Tuesday, the second (lot 122) being a half-brother to Group 3 winners Burnt Sugar (Ire) (Lope De Vega {Ire}) and Brown Sugar (Ire) (Tamayuz {GB}), who was bought for €50,000 by David Cox of Baroda Stud.

Saudi Arabia's Najd Stud has made quite an impact when buying horses with form but it got in on the action a little earlier with the purchase of lot 186, a yearling colt by Dark Angel (Ire) from the G3 Prix d'Aumale-placed Pleasemetoo (Ire) (Vale Of York {Ire}), for €82,000. This time around Boherguy Stud was on the other side of the transaction as consignor on behalf of Godolphin.

Ross Doyle conducted the bidding in the company of Najd Stud's Saud Al Qahtani and said after signing for the colt out of the half-sister to Group 3 winners Siyoushake (Ire) (Siyouni {Fr}) and Skyward (Fr) (Camelot {GB}), “He'll continue to be raised in Ireland and will probably go into training here. He's been bought to race and he's a good strong colt by a stallion who does it everywhere and from a very good family.”

The team from Tally-Ho Stud stepped in to buy the half-brother to G1 Matron S. winner Champers Elysees (Ire) (Elzaam {Aus}) by their promising young stallion Cotai Glory (GB) for €70,000. Lot 118, was consigned by Railstown Stud on behalf of breeder Archway Stud and is out of La Cuvee (GB) (Mark Of Esteem {Ire}), who returned to Elzaam in 2021.

The sale gets underway an hour earlier on Wednesday at 10am.