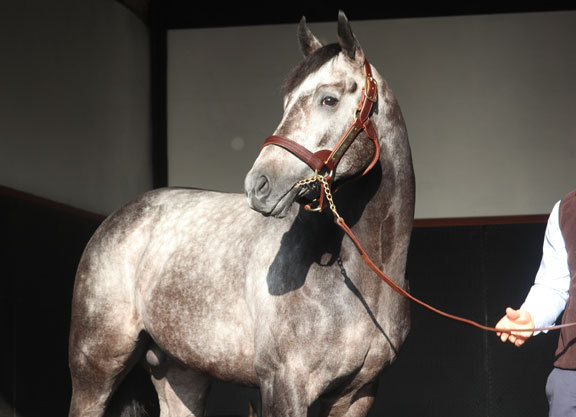 Qatar Racing's 2-year-old colt Lion of War (GB) (Roaring Lion) became the first scorer from the lone crop of his ill-fated sire (by Kitten's Joy), when graduating in his June 11 debut going seven furlongs at Leicester last time, and notched another notable first when becoming a TDN Rising Star with a 10-length rout in Thursday's Pertemps Riverside Restricted Novice S. over much the same distance at Newcastle. The 8-11 favourite, burdened with a seven-pound penalty, was swiftly into stride and raced under a firm hold on the front end from flagfall here. Bounding clear of toiling rivals approaching the quarter-mile marker, he extended his advantage under urging and geared down from the furlong pole, easing to almost a walk across the line, to outclass Henzar (Ire) (Gutaifan {Ire}) by daylight in taking fashion.