River Boyne Over Got Stormy by a Head in Kilroe Mile 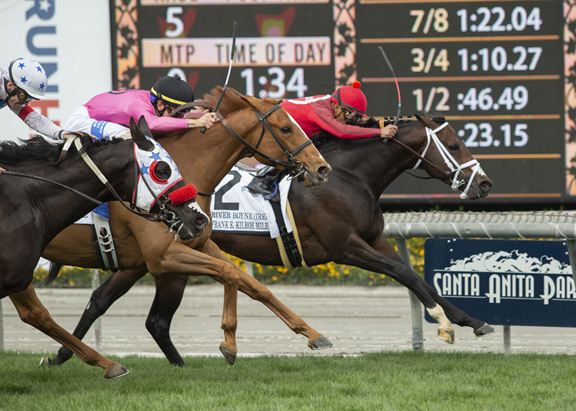 River Boyne continued to rack up wins over the Santa Anita turf course, scoring for the eighth time in Arcadia after sneaking inside of favorite Got Stormy late.

Hugging the fence from fourth under a snug hold, River Boyne inched slightly closer and into the pocked after a :46.49 half prompted by Got Stormy. Forced to wait for clear sailing as pacesetter Kingly (Tapit) faded in front of him, he worked his way off the rail to avoid that foe before diving back inside to snatch victory from the public's pick. Next Shares wasn't far behind in third.

“Well, thank God my horse can go anywhere, inside or outside,” Cedillo said. “I was trying to go outside, but when I saw him move up a little bit, I got plenty of room inside. So, I just took a chance to go inside. My horse responded really good. I'm excited, my horse is running really good.”

Fourth here 12 months ago, River Boyne was second in the GI Shoemaker Mile over the same course and distance in May. He was far back in the GII City of Hope Mile Oct. 5 after a freshening, but bounced back to be third in his next three outings, including a close finish behind Next Shares in Del Mar's GII Seabiscuit H. Nov. 3 and to defending Kilroe champ Ohio (Brz) (Elusive Quality) in the Jan. 11 Cotton Fitzsimmons H. at Turf Paradise. The dark bay was a clear-cut winner over several of these same rivals in the Feb. 8 GIII Thunder Road S. first time under Cedillo.

“This is probably the real definition of a racehorse,” said Mark Cohen of Red Baron's Barn. “When he was turned out for a little while he was not happy. He did not like being at the ranch; as soon as he came back to the track it was straight to business. This is what he loves to do. If he didn't hit the board our plans would have definitely changed. There are no plans, as always the horse will tell the trainer what to do and the trainer lets us know what he wants to do but it is always about the horse… I am thrilled for the horse and thrilled for anyone who has been involved with him. He is a super nice horse, and everybody has just done a great job with him, [trainer] Jeff [Mullins] in particular.”

Ballyhane Stud in Ireland stands Dandy Man (Ire), a Danehill-line stallion whose seven crops of racing age include 2016 Hong Kong champion Peniaphobia (Ire). River Boyne (Ire) is one of 13 black-type winners–nine group or graded–for the stallion and the second to excel at the highest level in North America, with 2018 GI Natalma S. winner La Pelosa (Ire) among his top performers. Like La Pelosa, River Boyne's pedigree is thoroughly European and he is the only runner in his immediate family to make it Stateside. Dam Clytha (GB) has produced fillies the last two years, by Alhebayeb (Ire) and Divine Prophet (Aus), respectively. While she was an unplaced runner, Clytha is by the burgeoning broodmare sire Mark of Esteem (Ire), an English champion whose 55 stakes winners out of his daughters to date include seven champions.