Ritvo Weighs in on So Cal Horse Population 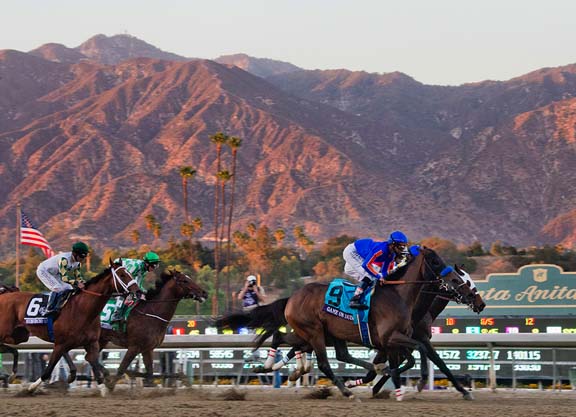 Tim Ritvo, the chief operating officer of the racing division for The Stronach Group (TSG), has recently been assigned to focus on Santa Anita Park. One of the challenges that the iconic track–and the entire Southern California circuit–faces is the issue of field size and optimal horse population management.

Twice this spring, on Apr. 27 and June 8, Santa Anita has had to call off Thursday racing because of an inability to fill entries, and the track has since received permission from the California Horse Racing Board to drop the Thursday cards scheduled for June 15 and 22. In a Friday phone interview with TDN's T.D. Thornton, Ritvo outlined both short- and long-term strategies that TSG might undertake to bolster the racing product. An edited transcript follows.

TDN: Please explain how TSG defines the current difficulty in filling entries. Is it a true “horse shortage” problem or more of an “inventory management” issue?

TR: Our quick first assessment is it's not a horse population problem. It's a utilization of the inventory we have. We have 3,100 horses within the area between the training centers and the tracks, and that number should be sufficient enough to run a good, four-day-a-week schedule. So obviously it's a problem with inventory–either controls of exactly what's back there or participation from the horsemen.

TDN: What short-term solutions are forthcoming?

TR: Short-term obviously is moving to a three-day week until June 30, when we close the meet with a five-day run through the July 4 holiday. That should help us with the inventory, and as we can run extra races [per day], other opportunities exist. The win there is that if you had eight races on a Thursday and you move four of them and sprinkle them out over Friday, Saturday and Sunday you should get better [betting handle] returns on those, because they're better racing days that people are off work and everything else.

Entries struggled so bad [for June 8] that we didn't have enough horses to draw. Now we could have thrown something together. We had 48 horses, but 12 were in one race and 10 in another, so we had 26 horses for the rest of the races. [Horsemen] want to run in small fields, but that doesn't work for anybody because when you generate [races] that don't produce purse money, you're paying for it somewhere else. So I thought for the fans—because to me, the economic engine of the game is the customer—without giving the customer a good product to bet on, purses go down, revenue goes down, everything goes down. So the idea was to try and take those races, the two or three good ones we had, and mix the cards together over Friday, Saturday and Sunday.

TDN: What about longer-term approaches?

There are questions like “Are there too many 2-year-olds in ratio to older horses?” All of these things have to be looked at. I'm just diving in, so obviously it takes a team of people to work together on this from all sides—the horsemen, the breeders, and everyone else. But the biggest thing we've got to figure out is what categories are we missing.

The quality of racing does not suffer in southern California. We have lots of quality, but now we need to add some quantity to it. The “middle of the meet” program. The high-priced claiming categories. Stuff like that. That's where we need to figure out are we giving away enough purse money at that level? What incentivizes people to come out here with those kinds of horses? Is the cost of keeping a horse so much that those middle-of-the-road claiming horses just don't make sense? Those are all things you have to look at.

TDN: Once the current meet concludes on July 4, what horse population-related initiatives might TSG consider for the autumn meet and going forward into 2018?

TR: We're looking at everything. We're just getting started. There are definitely house rules that can be implemented to give us better inventory control over the horses that we do have, rules we can create to keep people from coming in and just poaching horses. Some of the easier things to stop are people paying other people to claim horses to take to the Northeast. That stuff's got to stop.

We're also going to hire an analyst to do backside inventory to tell us what we have back there and what's ready to run, and we're going to do more individual meetings with trainers to talk about what their stall applications looked like when they applied [compared to] what they look like today. Listen, you could end up getting lucky. You could have six trainers say they're looking for the same race, and all of a sudden you get yourself a race.

TDN: One problem nationwide is that smaller outfits have been gradually squeezed out of the game. Much larger consolidated outfits seem to be evolving, and at almost every track there exists a handful of trainers whose barns make up large blocks of the entire backside population. Does this hamper the entry process?

TR: Yes, that's a problem–the “super trainers.” It's tough, because if a guy has done a really good job in his life and continues to build up his stable, you hope that you have a free enterprise where people can be successful. But the real problem is though, how do you get the younger guys started? How do really good horsemen that are underneath [the perennial top trainers] get opportunities? It's not easy. There's a balance that has to happen. Maybe stall limits or things like that. All of these things–I don't want to go out there and dictate policy. What I want to do is say, “everybody has been good in acknowledging there's a problem.” Obviously, if you can't fill entries, there's a problem. And we need all the parties working together to see what the solutions are. And yes, one [solution] may be limiting stall space and stuff like that. It might help a younger [trainer] with 10 or 12 horses be more productive and get ownership. Those are industry-wide problems that need to be looked at. Listen–all of us in the game know the problems. The really tough thing is having solutions and making them work.

TDN: So at Santa Anita, is the problem of larger outfits not supporting the entry box a legitimate concern?

TR: That's not always exactly true. I mean in Florida, Todd Pletcher, he runs a lot of horses. He's a big outfit, but runs a ton of horses. A lot of times the big guys run horses. But the problem is they tie up so many categories–like when they have 40 or 50 2-year-olds in a 200-horse outfit–they don't run them against each other. And if they have very good horses, they end up winning four or five maiden special weights, and now the “non-winners of two” doesn't go because they have all the horses. So yes, it's an issue, but it's something you have to be conscious of and try to figure out how you deal with it. But at the same time you don't punish people for being successful.

TDN: How about looking at the population problem from its widest angle–the decline of the North American foal crop over the past several decades? What does the industry as a whole have to do moving forward to address this issue?

TR: Obviously, consolidated, condensed racing schedules. Now, I'm probably not a good person to talk about that because I like to increase racing at the facilities where I'm at. Because once you have infrastructure in place, and these facilities are maintained, and you have purse money and you have inventory, it makes sense to run more, because there's more opportunity for everyone to make money. But as a whole, as an industry, we've seen shrinkage in the horse shortage.

Listen, TSG tries to capitalize on being the horse-first racing company. We're the company that likes horse racing and wants to see it thrive. We're not focused on things like slots—we know those are short-term fixes. We want conventional horse bettors to bet on our products, so we want to make sure we offer a good enough product for people to continue to wager.

So I didn't answer your question directly. A consolidated racing schedule so that people cooperate with each other [could be an answer]. But at the same time, we're not going to do that if other tracks aren't as committed as we are to racing. Look at the example in Florida: [Gulfstream] was working really hard in the winter meet to grow the sport, and then the summer meet went to Calder and there wasn't the emphasis on racing, and we basically said we're better off [having TSG take over the Calder dates as Gulfstream West], and it's a win-win for both companies.

TDN: Is there anything I didn't ask about the horse population and inventory issue that you'd like to get on the record?

TR: Please put it in the article that we're not looking to reduce the racing schedule. Obviously, we'd like to run more, and if my reputation speaks for anything in Maryland and Florida, the only thing you do need is inventory and you need purse money. If you have those two things you can increase your race schedule. If you don't, you're doing the fans a disservice.

TSG is truly committed to the success of horse racing. It's not that we're trying to just drive bigger profits or anything like that. It all comes down to we're truly committed to the best product that we can provide to the customer, and we don't want to lose market share. We want to continue to pick up market share. There's only $10 billion [in betting handle] out there for five years in a row, and the tracks that do a better job in sending a product out that the customers can bet on will get the majority of the money–so we want to keep doing that.