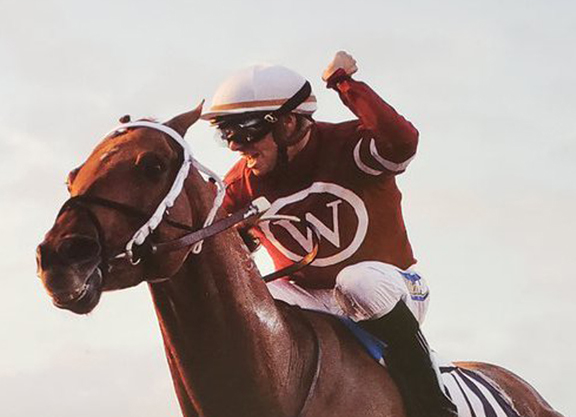 An internal marketing policy at The Stronach Group (TSG) designed to minimize imagery that shows whip usage in horse races resulted in unintended blowback to start the new year.

But Tim Ritvo, the company's chief operating officer, told TDN Wednesday that the company is owning up to its error in judgment, and that he now intends to use the instance of overzealous photo editing to spur reform to one of the sport's most sensitive welfare issues.

TSG's Gulfstream Park recently gave away a 2019 wall calendar as a promotional item. Soon after the calendars began to circulate publicly, some racegoers took to social media to criticize the track's decision to digitally remove some of the whips carried by jockeys in the in-race action shots.

The most prominent image that was sanitized in this fashion was of Gun Runner (Candy Ride {Arg}) soaring home in front of the GI Pegasus World Cup field last January.

The edited photograph was conspicuous because it did not match up with the original image released by the track a year ago in which jockey Florent Geroux exultantly waved his whip aloft in his left hand as he crossed the wire. Instead, the retouched image shows Geroux riding one-handed with the other hand making a loose fist with nothing in it.

Jordan's Henny (Henny Hughes), the long-shot victress of last year's GIII Hurricane Bertie S., was similarly depicted with an edited-out whip, resulting in jockey Tyler Gaffalione holding his right arm extended away from his mount's flank in an awkward position.

Some sarcastic denizens of social media saw fit to fill in the blanks with items of their own choosing. One Gun Runner shot showed Geroux instead brandishing a photoshopped baguette; a retouched version of a different horse showed the jockey wielding a light saber from the “Star Wars” movie in place of the vanished whip.

“If we could do it again, we would have not removed the whips,” Ritvo said. “There's no question that was an oversight, and that we should have just selected other images. To try to hide or deface [whip use] is not the best strategy, and it was clearly a mistake. We should not try to hide what is already out there. People know that jockeys use whips. What we should do is try to move forward with what's the right message and what's the right thing to do. From this, I'll learn myself, and we'll address these issues.”

Ritvo explained that TSG's marketing policy at its six United States tracks is to depict “limited use of the whip, meaning nobody reaching back and hitting the horse or anything like that.”

TSG's Santa Anita Park also had a 2019 calendar giveaway, which Ritvo said was assembled by being a little more judicious about which photos were selected rather than relying on the editing process to remove the whips.

“The instructions from our main office to our marketing [team] were not to use any whips where people are reaching back to strike a horse,” Ritvo said. “In [Gun Runner's] case, instead of just swapping out the photo and using another picture, they ended up [digitally editing out] the whip, which is probably a little bit stupid. And the reason it's stupid is [Geroux] is just waving the whip in victory, not like he's going to reach back and hit the horse. That's the frustrating part.”

Ritvo has a unique perspective on this issue because he is one of the few former jockeys to rise to a prominent position in racetrack management. He last rode 30 years ago at Suffolk Downs, and he told TDN that he feels strongly about the need to change the culture of whip use in the sport–not only because it creates negative public perception, but because he believes whip usage is largely unnecessary.

“Back in my day when we rode, it wasn't an item of discussion. And truthfully, aftercare wasn't an item of discussion either. But look how that's evolved in the last couple of decades,” Ritvo said. “Being an ex-jockey, I actually believe horses enjoy running when they're properly taken care of. So the question is, why do they need any more encouragement if they really enjoy what they're doing?”

“People in the industry are now more understanding about the health and welfare of the animal,” Ritvo continued. “These are important issues. They're integrity issues. And because [TSG] benefits from racing, we need to be aware of them. I think we've done a good job in aftercare. I think we've done a good job from where we came from in using the whip for correction. Now we need to evolve into the next steps as to how much are they really needed, and [how we] encourage horses without the effect of hurting the animal or making it do something it doesn't want to do.

“The bottom line is, we care about the horses as much as anybody, because horses are our business,” Ritvo summed up. “The whip should be used as a correction tool, and that's it. The discussion moving forward should be more on the direction we go as a business as to whether whips are even required. Maybe this will bring the issue more to the forefront.”