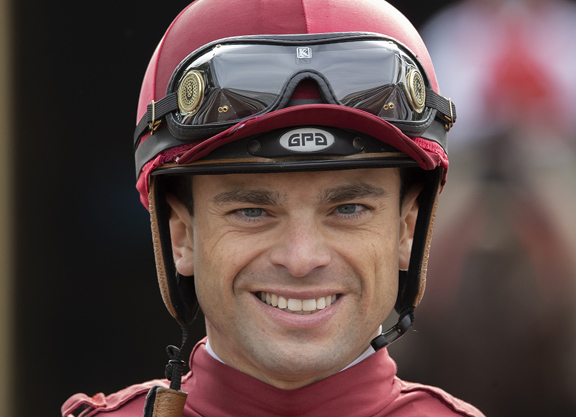 Several major shifts in riding assignments were underway Friday morning after Umberto Rispoli and John Velazquez were not allowed to fly to Saudi Arabia due to a mixup in flight arrangements Wednesday and problems with COVID-19 restrictions Thursday.

Ron Anderson, the agent for Velazquez and Rosario, said that Mickael Barzalona would ride Max Player (Honor Code), that William Buick would be aboard Tacitus (Tapit) in the Saudi Cup, and that Joel Rosario would ride New York Central (Tapit) in defense of his title in the Riyadh Dirt Sprint. In the Saudi Derby, Rosario takes over on Cowan (Kantharos) after being released from his previous assignment on Pink Kamehameha (Jpn) (King Kamehameha {Jpn}).

Rispoli had been set to ride Max Player for Steve Asmussen in Saturday's Saudi Cup, as well as Cowan in the Saudi Derby, but was taken off a Qatar Airways flight to Doha as it prepared to take off Thursday, according to a Tweet posted by the jockey Thursday evening. John Velazquez, scheduled to ride Tacitus, and who was supposed to depart from Miami, was not allowed to fly.

Anderson said that the problems began Wednesday when the two jockeys and Gary Stevens, who was to be part of the broadcast team, arrived at LAX and discovered that their tickets had been canceled. From Doha, they were scheduled to fly to Saudi Arabia.

“The night before last (Wednesday), Umberto and Joel were at the airport in L.A., said Anderson. “The travel team from Saudi made a mistake and double-booked the second leg into Riyadh, so when they got to the airport, their tickets were canceled. Johnny gets to Miami, because he was in Florida, and same thing. They told us it's called a dupe, and the computer automatically cancels the ticket, as they explained to us, because they didn't cancel the first reservation before making the second.”

It was unclear why the tickets had been booked twice.

Rispoli and Stevens were booked on a flight the next day, Thursday, and were taken off the plane when it became apparent that their COVID test, which was required to be taken within 72 hours of landing in Riyadh, would expire before they arrived in Saudi Arabia. Rosario was allowed to stay on the plane because he had sought an additional COVID test after his first flight was canceled.

“We had thought, 'okay, it's alright, we'll just go the next day,'” said Anderson. “Now Gary, Joel and Umberto are on the plane, sitting in business class, having a glass of champagne, and someone comes and says, `okay, you three are getting off the plane. Your 72-hour COVID test expires by the time you get there.'”

But while Stevens and Rispoli were taken off the plane, Rosario showed the airline staff the additional test he had taken a day later as a precaution when they were not allowed to fly Wednesday. “We're lucky the testing center sent an email,” said Anderson. “He spent $400 on a rapid test, and they said `okay, you're allowed to fly. You two are not.'”

Rispoli posted a video on Twitter Thursday night with his version of events.

“As you can see, I am here, sitting home on my bench,” said Rispoli in the Tweet in which he was critical of the organization running the event. “I couldn't make the flight to Saudi to go to the Saudi Cup. It has been since yesterday I have been trying to fly, but it has been over a week that we have had an issue with the organization with the Saudi Cup,” he said. “Yesterday, there was an issue with the ticket. The ticket was cancelled after I was at the airport for three hours. Today, I was ready to fly, my luggage was already on the plane, I was in my seat, my seatbelt was fastened, and before we took off, the stewards came and took me off the plane, saying in Riyadh at that moment, exactly that moment, there was a change in the rule in the COVID test. Before, it was 72 hours prior to the flight. This time, in Riyadh, the request, a COVID test, was 72 hours once you land in Riyadh. It was something that was out of my hands. I'm so devastated, I'm frustrated, and that's why I couldn't go to ride the Saudi Cup.”

Stevens Tweeted that he was also removed from the flight. “Anyone that has seen the tweet and video post of @unbyrispoli, I was on the same flight and removed as well due to immediate Covid test restrictions. Not good. No @thesaudicup for us.”

Stevens supported Rispoli's version of events, that the COVID protocols were changed at the last moment. “We knew all the rules,” Stevens wrote. “They literally changed them just before they fired up the engines. We met all protocols and they changed them.”

“It wasn't the airline's choice,” said Stevens. “All I know is it became our problem in a hurry. Qatar Airlines were very professional and kind about it. They said it was Saudi. We were fine to fly to Qatar, but not on to Saudi. They wouldn't have allowed us in.”

Velazquez rebooked his original flight and had planned to fly through Spain when he was told that protocols in place in that country would not allow him to change from one terminal to another, or risk a $10,000 fine and imprisonment. He never left Miami.

Velazquez tweeted Friday morning: “I tested negative 4 times this week to make it to the Saudi Cup but never made it anywhere, because flights canceled or wrong alternatives. I am not in Spain. Very disappointed.”

Rispoli said he felt sorry to leave the connections of Max Player in this situation. “I would like to give my apologies to Steve Asmussen, and his connections. I'm really sorry about that and also, I would say as well that this is the biggest race in the world and that there should be a better organization behind this, and probably then there wouldn't be any issue. Today, I'm paying the consequence of this organization, which probably didn't pay attention to any details. As I said, I'm frustrated, I'm have to move on, I'm going to watch the races on t.v., and I wish all the contenders of the Saudi Cup best of luck and I will see you back in business at Santa Anita next Friday. Thank you for all of your support before the race, and I wish you guys can keep supporting me.”

Officials at the Saudi Cup issued a statement Friday morning confirming the news, adding, “We understand and share John and Umberto's disappointment at not being able to ride at the Saudi Cup meeting.”