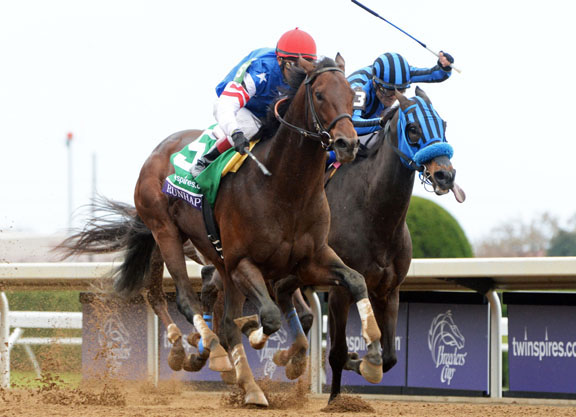 GI Breeders' Cup Sprint hero and likely Eclipse winner Runhappy (Super Saver) takes on a pair of lightly raced 'TDN Rising Stars' in Santa Anita's featured GI Malibu S. Saturday. The speedy bay will be making his first start back with Laura Wohlers after owner James McIngvale transferred his stable star from Maria Borell in a much-publicized move on the Sunday after the Breeders' Cup.

Runhappy kicked off his career for Wohlers with a head-turning 8 1/4-length romp despite extreme greenness almost exactly a year ago at Turfway, but stopped badly in the GIII LeComte S. on the stretch out at Fair Grounds Jan. 17. He joined the Borell barn thereafter, and reeled off five consecutive victories, stepping up from Indiana and Ellis Park optional claimers to run away with the GI King's Bishop S. at Saratoga Aug. 29 while earning a gaudy 113 Beyer Speed Figure. The $200,000 KEESEP yearling overcame a rough start and his saddle slipping when he defeated older horses–including 2014 champion sprinter Work All Week (City Zip)–in Keeneland's sloppy GIII Phoenix S. Oct. 2, and justified favoritism over accomplished veteran Private Zone (Macho Uno) when employing stalk-and-pounce tactics to beat that rival by 3/4 of a length in the Oct. 31 BC Sprint. Runhappy most recently worked over track and trip Dec. 15, covering the distance in an easy 1:25.40, and will be piloted for the first time by Gary Stevens after regular rider and fellow Hall of Famer Edgar Prado was recently sidelined with broken ribs.

Fourth from very far back in the King's Bishop was Watershed (Bernardini), one of two up-and-coming Sheikh Mohammed/Kiaran McLaughlin 'Rising Stars' who appear the biggest threats to Runhappy here. A highly impressive four-length winner on debut at Saratoga in August, the bay was last seen blowing by his rivals in a Keeneland allowance over a similar distance Oct. 15.

McLaughlin and Godolphin's other shot at a first win in this prestigious event comes by way of two-for-two Marking (Bernardini). The son of MGISW Seventh Street (Street Cry {Ire}) bested a next-out winner by a clear margin first up at Belmont Sept. 23, and crushed three-and-up allowance competition by 5 1/2 lengths over a one-turn mile at Aqueduct Nov. 4. Watershed covered four panels here Dec. 18 in :47.60, while Marking went in :47.40.

Considering their success in Grade I races for 3-year-olds this season, it would come as no surprise if Zayat Stables closed out the year with one more win at the highest level. 'Rising Star' El Kabeir (Scat Daddy), winner of a trio of graded routes late last year and early this season, went missing after finishing third behind Frosted (Tapit) in Aqueduct's GI Wood Memorial S. Apr. 4. Last in the GIII Bold Ruler H. over this distance at Belmont Oct. 31, he returned to sophomore-only company to take the City of Laurel S. by a nose in Maryland Nov. 14.

Lord Nelson (Pulpit) has a live look as he returns to the track and trip of his GII San Vicente S. victory this February. Fourth to stablemate Dortmund (Big Brown) in the GII San Felipe S. going long Mar. 7, he ran an incredible race when looking at one point like he might be eased to just miss in Aqueduct's GIII Bay Shore S. Apr. 4. The chestnut has been off since finishing fourth in Churchill's GIII Pat Day Mile May 2.