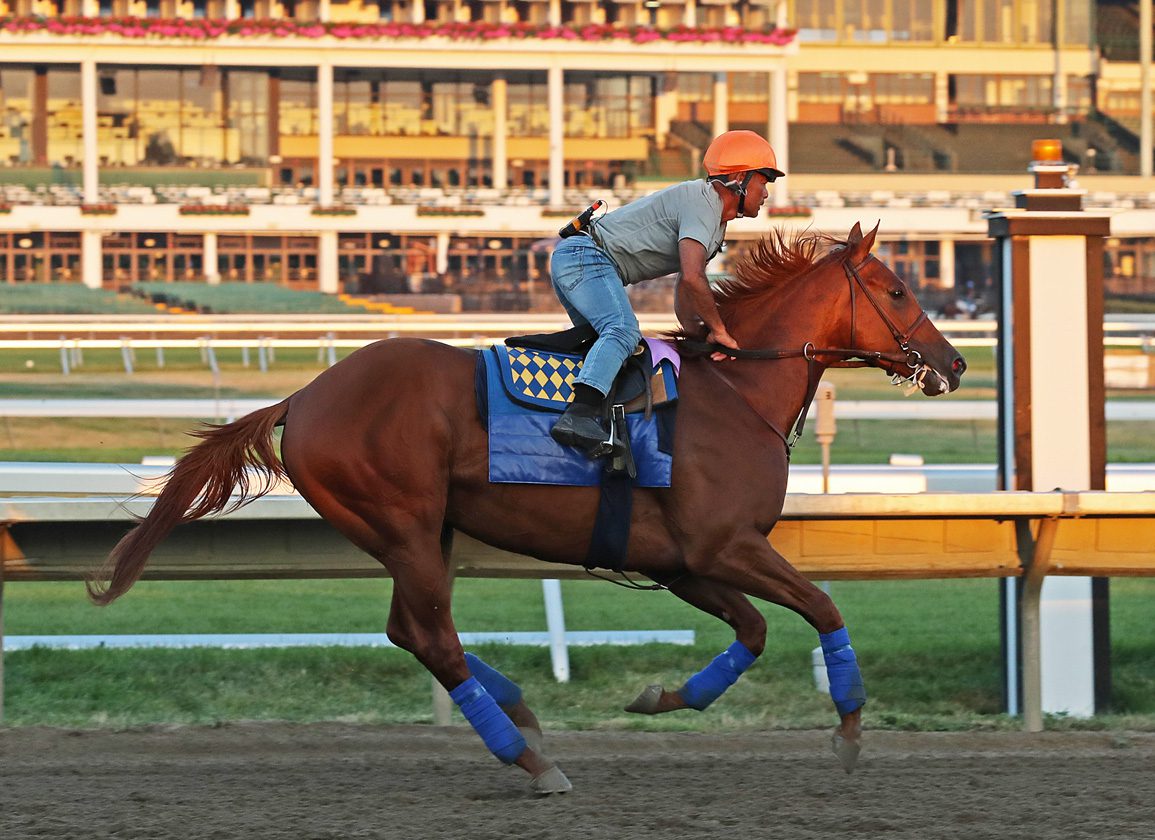 With the sun bouncing off the parterre boxes, Taiba gallops at Monmouth | Equi-Photo

The 'second season' for this year's crop of 3-year-olds–both boys and girls–gets underway in earnest with the running of the $1-million GI TVG.com Haskell S. at Monmouth Park for the males and the GI CCA Oaks about 2 1/2 hours earlier at Saratoga. And intriguing matchups between the top two morning-line choices loom in each of the nine-furlong tests.

Zedan Racing Stable's 'TDN Rising Star' Taiba (Gun Runner) was made the narrow 7-5 Haskell favorite by oddsmaker Brad Thomas and was utterly brilliant in his first two career starts, winning his Mar. 5 debut by a wide margin for Bob Baffert before belying his relative inexperience to take out the GI Runhappy Santa Anita Derby Apr. 9 after being switched to the barn of Tim Yakteen. Somewhat surprisingly sent out the 5.80-1 second-elect in the GI Kentucky Derby, the $1.7-million Fasig-Tipton Gulfstream purchase retreated to finish a well-beaten 12th after racing in a prominent position early on.

The chestnut is now back with Baffert, who certainly knows his way to the Monmouth winner's circle, having won the Haskell on nine previous occasions. Can Taiba add to the record?

“We know he's lightly raced but I feel he's doing really well,” Baffert said. “I wanted to watch him train. I wasn't really convinced he was going to the Haskell. He breezed really well. He's a big, strong heavy horse who won't light it up in the mornings, but I was surprised what he did first out [to breeze]. I let him dictate if he was ready or not. I wasn't going to throw him into the deep end of the pool.

“I would have liked an extra week with him,” Baffert admitted. But he's doing really well. He has speed and he doesn't get tired. The two turns won't be a problem for him. The Kentucky Derby was a tall order for him. I don't know what happened in the Derby. I wasn't around. The Haskell is a great race and there are some really good horses in here. I hope the horse shows up.”

Even if he does fire his best shot, he will be made to work for it given the presence of undefeated 'Rising Star' Jack Christopher (Munnings), who could well jump the Haskell favorite. Perfect in four trips to the post, the bald-faced chestnut was the likely choice in the GI Breeders' Cup Juvenile last year after gliding home much the best in the GI Champagne S., but was sidelined by injury on the eve of the race. Winner of the GII Pat Day Mile first off the seven-month hiatus May 7, he stormed home to take the seven-furlong GI Woody Stephens S. by double digits June 11, earning some high praise from his trainer.

“This horse is an exceptional talent,” Chad Brown said following the Woody Stephens. “This is my 15th year of training and I've never had a dirt horse with this much pure brilliance. He reminds me a lot of Ghostzapper when I worked for Bobby Frankel. He's a brilliant horse that can probably run any distance.

“Everybody wants to have horses like this–horse of a lifetime– including me.”

The Haskell serves as a 'Win and You're In' qualifier for the GI Breeders' Cup Classic at Keeneland the first weekend of November.

An equally inviting battle is in the cards at the Spa, where Secret Oath (Arrogate) and Nest (Curlin), both winners of important Grade Is and each exiting a run against the boys in a Triple Crown race, go head to head in the CCA Oaks. Mike Kane has our detailed preview.

The first three home in the June 11 GI Resorts World Casino Manhattan S. at Belmont renew acquaintances in the GI United Nations S. Tribhuvan (Ire) (Toronado {Ire}), who led every step of the 10 furlongs at Belmont, looks to join the likes of English Channel, Presious Passion and–going back to the days when the race was held as the Caesars at Atlantic City–Sandpit (Brz) as back-to-back winners of the race. Stablemate Adhamo (Ire) (Intello {Ger}) has a gap of 3 1/2 lengths to bridge, while Gufo (Declaration of War) should find Saturday's mile and three-eighths journey more to his liking. The two Grade Is anchor a run of five consecutive graded events, beginning with the GIII Monmouth Cup–where Brown fields the two market leaders–continuing with a contentious renewal of the GIII WinStar Matchmaker S. and concluding with GISW Search Results (Flatter) getting a fair bit of class relief in the GIII Molly Pitcher S.