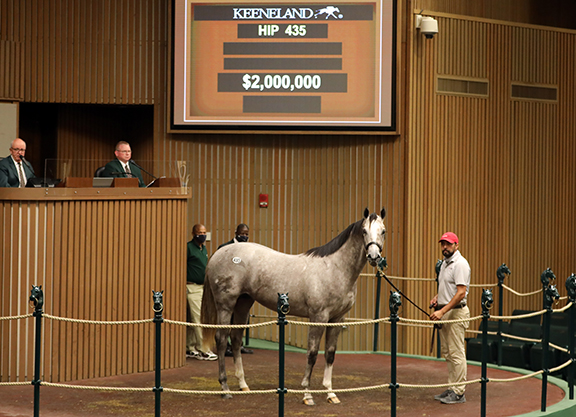 Yearlings by a pair of this country’s most prominent sires and each the produce of ‘TDN Rising Stars’ sold minutes apart late during the second session at Keeneland September to close the day as the top two lots. First through the ring was hip 435, a son of Tapit out of Tara’s Tango (Unbridled’s Song), who brought the hammer down at an even $2 million. The colt will be campaigned by a powerhouse partnership including Eclipse Thoroughbred Partners, Robert LaPenta, Gainesway and Ron Winchell. Stonestreet will also retain an interest. Just three hips later, a filly by Into Mischief out of ‘Rising Star’ Taylor S (Medaglia d’Oro) bred by Albaugh Family Stable fetched $1.9 million. Hip 435 was bred by Stonestreet, who raced Tara’s Tango to a victory in the GI Santa Margarita S. The mare’s Medaglia d’Oro colt made $2.15 million from Godolphin here last year. Hip 438 is out of the GSP Taylor S, a daughter of Miss Macy Sue (Trippi), whose distinguished produce include Liam’s Map (Unbridled’s Song)–himself a ‘Rising Star’–and boom freshman sire Not This Time (Giant’s Causeway). Not surprisingly, Larry Best signed the winning ticket.

Best Gets Into Some More Mischief

Larry Best has been a big supporter of Into Mischief for years, campaigning the likes of GSW Instagrand, Rowayton, Clivetty, Mundaye Call and Center Aisle. The OXO Equine principal added another offspring of the red hot Spendthrift sire to his stable Monday, going to $1.9-million to acquire a well-bred filly (Hip 438) out of ‘TDN Rising Star’ Taylor S (Medaglia d’Oro).

“I like her frame. She looks like a two-turn filly,” Best said.  “She has a wonderful family. With my collection of Into Mischief fillies, she has to be one of the best in terms of pedigree. I continue to bet a lot on Into Mischief and so far, so good. I feel good about this one.”

As for the price, Best said, “I didn’t get in til about $1.6-million. I knew she was going to go for between $1.5-million and $2-million. So, it did not surprise me. An earlier filly that doesn’t have this pedigree went for $1.025-million. With that as a marker, I knew I was going to have to be in the $1.7-2-million range. Book 1, I think, has been unbelievably strong. It blew my expectations away. Keeneland should be very happy.”

Hip 438 will certainly carry Best’s red and white silks around the racetrack, but was also bought with his broodmare band in mind, which he began to develop at last year’s November sale. His purchases last fall were topped by GI Breeders’ Cup Distaff heroine Blue Prize (Arg) (Pure Prize), who summoned a whopping $5-million at the Fasig-Tipton November Sale.

“I am up to about 27 fillies and mares [in my broodmare band],” Best said. “I love the breeding process. This filly fits both my racing protocol and my breeding strategy.”

Breeder Dennis Albaugh privately purchased Hip 438’s second dam Miss Macy Sue (Trippi) near the end of her racing career, which was highlighted by a Grade III win and over $867,000 in earnings. Her second foal Liam’s Map (Unbridled’s Song) brought $800,000 at the 2012 renewal of this auction and went on to win the GI Breeders’ Cup Dirt Mile and GI Woodward S. before retiring to the Lane’s End stallion barn.

The Albaugh family retained her next foal Taylor S, who was a stakes winner and Grade II-placed. Two seasons later, Miss Macy Sue produced Not This Time (Giant’s Causeway), who carried the Albaugh silks to a win in the GIII Iroquois S. and a second in the GI Breeders’ Cup Juvenile. He retired to Taylor Made and has his first runners this year, headlined by Grade I winner and $1.5-million OBSAPR topper Princess Noor.

Hip 438 is the third foal for Taylor S. Her first is a now 3-year-old named Four Grands (Honor Code), who won one of four starts for the Albaughs. She is also responsible for an unraced juvenile colt by Bernardini.

“I am so excited,” said a jubilant Albaugh. “This was a horse we loved a lot, but sometimes you need to take some money off the table and we have spent a lot at this sale. We are very happy. Larry Best got a very nice horse. There is a lot of upside for him on this filly. We couldn’t be happier.” —@CDeBernardisTDN