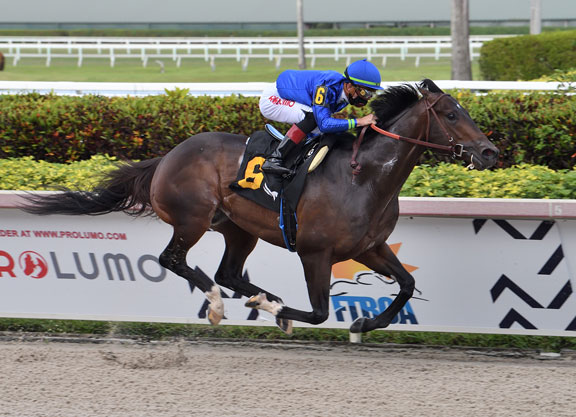 PREVALENCE (c, 3, Medaglia d'Oro–Enrichment, by Ghostzapper), arguably the flashiest debut winner of 2021 thus far, backed up his huge first-out victory with a more workmanlike allowance tally Thursday at Gulfstream in what could serve as a springboard to an April GI Kentucky Derby prep for the Godolphin homebred. Unveiled as a 34-5 proposition in a loaded-looking maiden race going seven panels here Jan. 23, the bay survived a host of pace pressers and burst away in the lane to a devastating, wrapped-up 8 1/2-length score, easily good enough for 'TDN Rising Star' honors. Considered for a run in the Feb. 27 GII Fasig-Tipton Fountain of Youth S., he was forced to pass on the race after missing a breeze with a fever. Quickly recovering to post two sharp works at Palm Meadows, Prevalence was pounded down to 1-10 against five overmatched-on-paper rivals here and broke a bit outwardly at the start. Tracking the speed in the clear from second through a modest :23.90 quarter, he turned up the pressure past a swifter :46.35 half and rolled by three-quarters on even terms in 1:10.74 under confident handling. Shaken up by Tyler Gaffalione outside the furlong pole, he scampered clear soon after and didn't face a serious danger from there, hitting the wire three lengths to the good of 32-1 longshot Southern Passage (Super Saver).

“It was probably not as flashy as his first race, but I think we're going to get a lot more out of this race today,” Gaffalione said. “He was definitely more green. He was looking up at the grandstand down the lane. He kind of got lost by himself. I just had to remind him to keep to his task. He has a really bright future. I'm really looking forward to getting to the bottom of him. He didn't disappoint at all today, if anything, I'm even more excited about him because I know, if it comes to it, he will give me some fight.”

The winner is a half to Estihdaaf (Arch), GSW-UAE, $183,491; and Libreta (Girolamo), SW, $128,660. His dam, a full-sister to MGISW Better Lucky (Ghostzapper), has a juvenile Quality Road colt named Emirates Road and foaled a colt by Frosted last term before visiting Uncle Mo. Second dam Sahara Gold (Seeking the Gold) is a GSW daughter of 1995 GI Breeders' Cup Sprint heroine Desert Stormer (Storm Cat). Lifetime Record: 2-2-0-0, $52,800. Click for the Equibase.com chart or VIDEO, sponsored by Fasig-Tipton.