'Rising Star' Mystic Guide Gets It Done in Jim Dandy 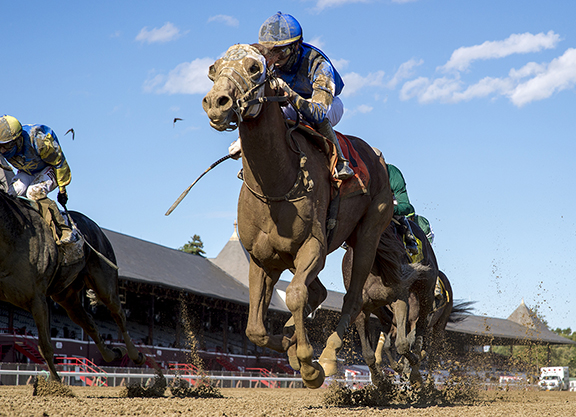 'TDN Rising Star' Mystic Guide, sporting first-time blinkers, sat much handier to the pace than when last seen in the GIII Peter Pan S. on opening day of the Saratoga meet July 16, weaved his way through traffic to be within striking distance turning for home and kicked on gamely in the stretch for a career high.

A bit hesitant to load, the Godolphin homebred dropped out to the tail of the field, but trailed the dueling pacesetters by just about a half-dozen lengths down the backstretch. Rallying underneath odds-on Dr Post (Quality Road) on the turn, Mystic Guide was asked for his best a quarter mile out, was spun four wide into the lane, overhauled Jesus' Team at the eighth pole and staved off a late charge from Liveyourbeastlife to get the money. Dr Post was a disappointing fourth.

“I know he was last down the backside, but he was definitely there when Jose [Ortiz] called on him today whereas the last time he was too late and had no chance,” winning trainer Mike Stidham said of the addition of blinkers. “Today, he was there when Jose called on him. Once he got through turning for home, I felt really good about him because he has a big kick. He put himself in a better spot today and gave himself a chance. It really is a pleasure to win a race like this at Saratoga.”

Tabbed a 'Rising Star' off a powerful performance in his two-turn debut at second asking at Fair Grounds Mar. 21, Mystic Guide was second-best behind Tap It to Win (Tapit) in a quickly run first-level allowance at Belmont June 4, then closed from far back to be third as the favorite in the Peter Pan.

As for returning in the GI Preakness S. Oct. 3, Stidham added, “It certainly is a race that we'll look at. If our horse comes out of the race really well and we like the way he trains in the next couple of weeks, the Preakness would certainly be on the table no matter what happens today [in the Kentucky Derby].”

Mystic Guide is one of 79 black-type winners–43 graded–for the consistently top sire Ghostzapper. The 2004 Horse of the Year's other graded scorers this year include GI Madison S. winner Guarana and GII Dance Smarty S. winner Theodora B. Godolphin homebred Mystic Guide is out of the five-time GISW A.P. Indy mare Music Note, who is a half-sister to G1 winner Musical Chimes (In Excess {Ire}) and a granddaughter of 1978 champion 2-year-old filly It's in the Air (Mr. Prospector). Music Note's most recent produce is a yearling filly by Maclean's Music. Mystic Guide is the fourth graded winner resulting from the cross of Ghostzapper on an A.P. Indy mare, with the others being Moreno (GI), Champagne Problems (G3), and Matthewsburg (G3).