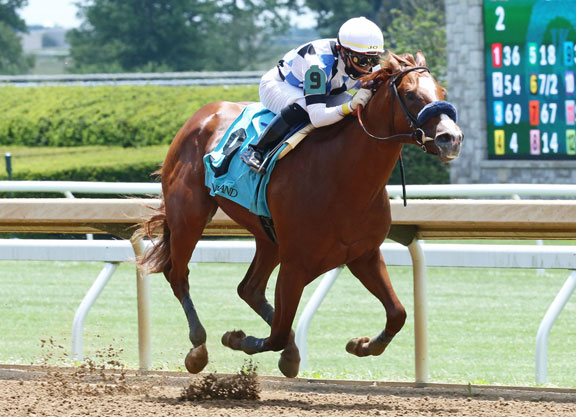 If he comes close to replicating his last two speed figures, it's going to be pretty tough for anyone to best 'TDN Rising Star' Therideofalifetime (Candy Ride {Arg}) in Churchill's GIII Iroquois S.–which offers a “Win and You're In” berth for the GI Breeders' Cup Juvenile. The Stephen Fidel homebred was second to Jackie's Warrior (Maclean's Music) going five panels here June 19 before breaking through by 8 1/4 lengths at Keeneland July 11, good for an 85 Beyer Speed Figure. He was most recently second to Jackie's Warrior in the GII Saratoga Special S. Aug. 7, but the 81 Beyer he earned for that effort towers over his competition. Next-fastest on figures is the tough-to-read Dreamer's Disease (Laoban). Hailing from the first crop of New York-based Laoban (Uncle Mo), the Southern Equine Stables homebred was a distant last after a rough journey sprinting at Ellis July 2. He switched to the turf and stretched out at the Pea Patch Aug. 8, and looked like a completely different horse, romping by four lengths, good for a 78 Beyer. Super Stock (Dialed In) and Pico d'Oro (Curlin) are the two who boast prior stakes wins. The former annexed the Texas Thoroughbred Futurity at Lone Star Aug. 11, while the latter–also bred by Southern Equine and eventually acquired for $255,000 at OBSMAR–broke his maiden with a strong pace set-up in the seven-furlong Runhappy Juvenile S. at Ellis Park Aug. 9. The remaining seven cast members all enter off maiden-breaking outings on the Ellis main track. One to have on the radar is Thomas Humphries-owned and trained Belafonte (Tonalist), who blew the break in his Aug. 2 unveiling in the slop but uncorked an impressive turn move to win going away at 49-1. The $20,000 FTKOCT bargain buy will sport blinkers for the first time.