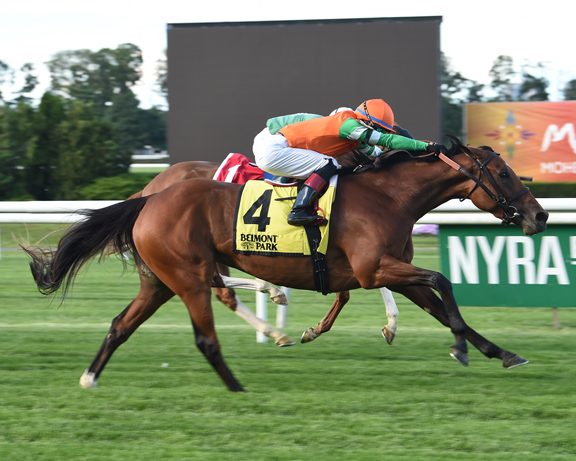 Rubilinda, named a 'TDN Rising Star' for a smashing last-to-first victory over this distance and surface on debut May 27, bounced back from a slight hiccup last time to earn the first stakes victory of her promising career. Sluggishly away, the 4-5 chalk was content to give her competition a head start through splits of :22.48 and :45.54. Tipped widest when finally asked for more at the top of the stretch, she inhaled her foes despite a touch of greenness to power past pacesetting Smiling Causeway late.

“She has a great kick from the quarter pole home,” said Jose Ortiz, fresh off of Saratoga riding title. “She broke good today, not like her debut, that day she broke bad, so I took her back a little bit in the early stages and let her do her thing in the clear in the stretch.”

Second at 2-5 going an additional furlong in a first-level allowance here July 9, Rubilinda had been entered in a one-mile optional claimer at Saratoga Sept. 3 but was scratched when that event came off the turf.

“She ran very, very well,” said Cherie DeVaux, assistant to trainer Chad Brown. “She had pace to close into and she made up a lot of ground. She's always been real straightforward, a very classy filly and progressed really nicely. Chad left it up to Jose in how he wanted to ride her and he did a terrific job.”

Rubilinda becomes the first U.S. stakes winner and 15th overall for her popular young sire. She was the Juddmonte superstar's first U.S. winner when she won on debut. The Heller-Solari family's Don Alberto Stable purchased Rubilinda in utero for 475,000gns at the 2013 Tattersalls December Sale. She has an unraced 2-year-old half-sister named Ruffina (Street Cry {Ire}) and a weanling half-brother by Empire Maker. Rubina was most recently bred to Giant's Causeway.