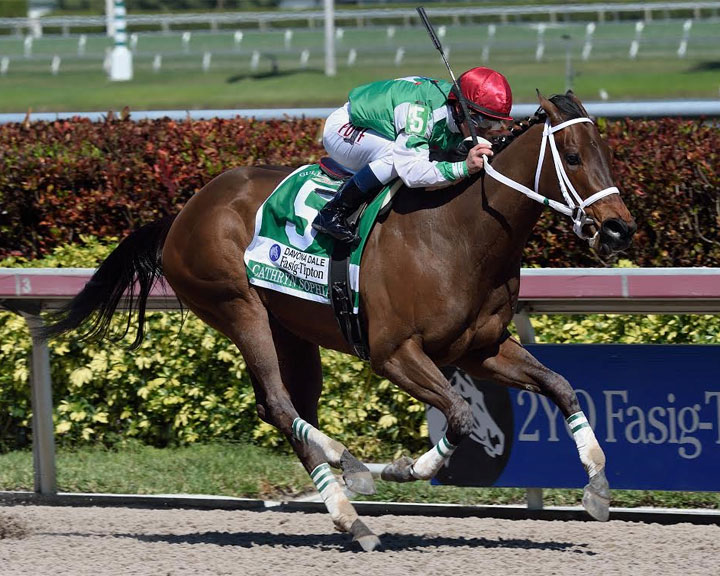 The waters were deeper, in theory, for Cash Is King LLC’s Cathryn Sophia in Saturday’s GII Davona Dale S., as she was stretching out beyond seven furlongs for the first time. But the $30,000 Fasig-Tipton Midlantic Yearling acquisition continued to treat her opposition with utter disdain, streaking home to record a daylight success to remain unbeaten and untested to date.

The bay decimated a field of Parx maidens on her Oct. 30 bow by 12 3/4 lengths, then was accorded TDN Rising Star status with a 16 1/4-length thumping of five overmatched rivals in Laurel’s Gin Talking S. Dec. 5. She soon found herself on a Florida-bound van, tore up the Palm Meadows strip in four subsequent works and validated a quote of 1-10 in coming home the 5 1/2-length victrix of the GII Forward Gal S. Jan. 30.

With Javier Castellano taking over at the controls from the sidelined Joel Rosario, Cathryn Sophia was not asked for much speed away from the gates and took up a stalking position three wide as Dearest pushed through at the inside to alternate up front with impressive Gasparilla S. winner R Girls a Charmer (In Summation). Bagema (Notional) briefly made it a line of three entering the turn, but her day was over soon after as Cathryn Sophia ambled up with a three-wide bid to arrive at the top of the stretch on even terms, still hard-held by Castellano. While the odds-on favorite had shown a propensity for racing on her incorrect lead in the stretch of her races, she switched over on cue once straightened for home and it was all academic from there. Lewis Bay, last year’s GII Demoiselle S. heroine, traveled strongly behind the top three turning for home, but could not match strides late and just managed to hold second. Cathryn Sophia has now won her four races by a combined 41 1/2 lengths.

“Today, I think was probably, to me, her most impressive race,” commented winning trainer John Servis. “She trained well going into the race. It was only her fourth start. I think there’s a lot more there. She’s showed me a little more every time. Today, she was push-button. I was concerned today about the distance a little bit, and obviously, the way she ran, I feel a whole lot better. She galloped out super. Javier thinks she’ll get the two turns, no problem. I feel pretty good now.”

The winner’s unraced dam is a daughter of Bob Manfuso’s accomplished mare Belterra (Unbridled), winner at two of the GII Golden Rod S. and third to Take Charge Lady (Dehere) in the 2002 GI Ashland S. Belterra was also third in the GII Bonnie Miss S., the current incantation of which–the GII Gulfstream Oaks–is the next stop for Cathryn Sophia.

Sheave is the dam of the 2-year-old filly Great Craic (Bullsbay), a yearling filly by Denman (Aus) and is due to Bullsbay this season.