Riding High from Breeders' Cup, Miller Barn Yet to Come Down 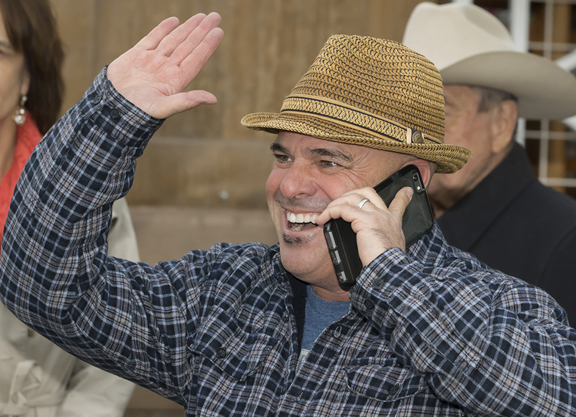 Racing is supposed to be a game of highs and lows, so after Peter Miller enjoyed the best day of his career on Breeders' Cup Day, it wouldn't have come as a surprise if his barn started to head in the other direction. Not everything can go right every day. Or can it?

Miller must be wondering.

The trainer finished one-two in the GI Breeders' Cup Turf Sprint as Stormy Liberal (Stormy Atlantic) edged out stablemate Richard's Boy (Idiot Proof). Three races later, he won the GI Breeders Cup Sprint with Roy H (More Than Ready). Miller wins a lot of races, but isn't often given a chance with top-class horses. The Breeders' Cup wins were his first Grade I victories since the 2013 GI La Brea S. He won that race with Heir Kitty (Wildcat Heir).

What he did next was take the Breeders' Cup mojo and run with it. Miller won five races over this past weekend at Del Mar and now has 16 winners at the meet with a 33% winning rate. Jerry Hollendorfer is second with seven wins.

“I'm a big believer in the energy in the barn,” Miller said. “The horses are so sensitive to energy, to good and bad. When everyone kind of has a spring in their step and is happy to be working, the horses feel it and vice versa. When the boss is in a bad mood and the people are in a bad mood, the horses sense that. There definitely is that thing of mojo or energy or whatever you want to call it that I believe horses can really sense. Certainly, winning those two Breeders' Cup races picked everybody's head up in the barn.”

Since Roy H's win in the Sprint, the Miller barn has gone 12 for 36 at Del Mar. Beyond the positive karma of the Breeders' Cup, he attributes his success to many different factors.

“During the summer meet at Del Mar, I did not do well (15 for 126) and the track was very deep, heavy and slow,” he said. “I was training at San Luis Rey Downs and it wasn't a good fit. For the Bing Crosby meet, I decided to send the horses who were going to run on the dirt down to Del Mar a couple weeks in advance of the race. I think that's been beneficial. The track is tighter and faster than it was in the summer. And, yes, we are getting good spots to run in. When most of your horses have blinking lights on the board, you know you're in the right spot. It's good when there's a blinking light between the 6 and the 5. And we're getting lucky, getting good posts, good rides, winning the head-bobs. It's just a combination of everything going right.”

Miller knows he has to cool down at some point.

Miller is aggressive when spotting horses, always looking for a spot where they can win. If that means running a horse back in a week, he will. That makes him a rarity among today's trainers. On Saturday, one of his winners, Painting Corners (Pleasant Strike) was running back in seven days. Among his other four winners over the weekend, the longest layoff any of them had was three weeks.

“One of the winners this week ran back in seven days and she won nicely. You have these sheet numbers, Ragozin and Thoro-Graph, selling this propaganda that horses need X amount of time between races and I think it's a lot of nonsense. If you're at the barn every day and watching every horse and checking legs and doing the right things, you know which horses need time and which ones don't. You can't just say this horse ran a 6 on the sheets, it's going to bounce to the moon unless you give it eight weeks off.”

There is something about the Bing Crosby meet that brings out the best in the Miller stable. He won the training title in 2016 and tied for first with Phil D'Amato in 2015, the first year Del Mar ran in the fall.

It helps that he has a lot of horses, but he's always looking for better ones. Did his Breeders' Cup wins and his domination of this meet cause any owners to take notice?

“Everyone says your phone must be ringing off the hook since the Breeders' Cup,” he said. “Well, that's not the way this industry works. All of my business is from word of mouth, referrals or people calling me because they like me. It's not me hustling. I'm not a really a hustler. I'm hoping some people recognize me and some of the bigger and better breeders and owners give me a chance. ln the meantime, I'll just take what I get and do the best I can with them.”