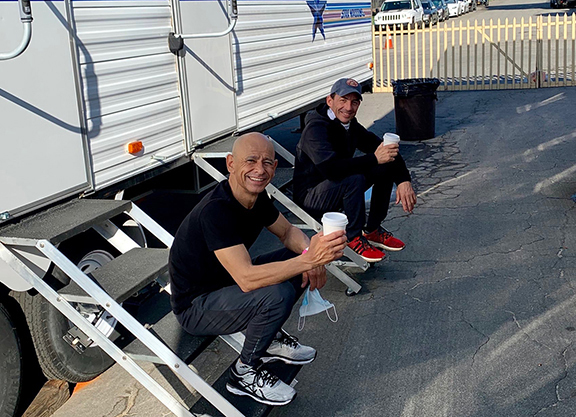 As the  realities of the coronavirus started to spread across California and the country, the team at Santa Anita wasn't sure how to prepare for what could have quickly escalated into a dire situation for the track and the sport. But what began as a scramble of sorts led to a well-coordinated plan. Racing would successfully return to the historic Southern California track and with an innovative wrinkle. During the racing week, the jockeys were required to live in a bubble in campers situated on track. What might at first have seemed to be an imposition quickly turned into a collegial summer camp for the riders.

“If you have to do something like this, this is the way to do it. I'd like to say life in quarantine is pretty tough, but I'd be lying like crazy,” jockey Mike Smith says.

Santa Anita was shut down by the coronavirus following the Mar. 22 card but returned May 15 and the meet was completed without any serious setbacks. How it did so is the subject of the entertaining documentary from NBC Sports Network “Riders Up. The First Sports Bubble.” (Click here for a preview.)

While horse racing has figured out how to operate during a global pandemic, that wasn't the case when COVID-19 started to upend life as we know it.  As “Riders Up” begins, the management team at Santa Anita is considering the worst-case scenarios

“We started seeing the news day by day get worse and we realized businesses were going to start being put out of business for the time being,” said Stronach Group Executive Director of California Operations Aidan Butler. “Unlike any other business, the racetrack is like a town. Eight hundred people live here. Eighteen hundred horses live here. It's not like any other business. That was the realization that we could have a real crisis on our hands. A little bit of panic set in across the group here.”

This was a case where panic turned into the mother of invention.

“At that point it was 'What are we going to do?'” Butler said. “We have to make a decision here. We can start to ask animals to leave here and people to start to get out and try to get it to an amount that was controllable or double down and try to get her open as quick as we could.”

The horses and the backstretch community were the easy part. There was plenty of room to accommodate them and because the horses needed to be cared for, there was never any serous question about allowing the backstretch workers to continue on as normal. The jockeys were the bigger issue. Should they be brought back and then, had some of them tested positive, racing would have likely had to be shut down again. It was decided to house them on track in RV's that were normally used on movie and television sets that had been closed due to the pandemic.

“We built a small city in a matter of a week,” said Senior Vice President and Assistant General Manager Nate Newby.

Santa Anita's bubble would be the first of its kind in sports, a precursor to what the NBA and the NHL would do with their players once they resumed playing.

Understanding that confinement can be stifling, Santa Anita set out to make things as enjoyable as possible for the jockeys. With Butler and Newby acting as head counselors, there was a 50th birthday party for veteran Aaron Gryder, karaoke, poker, movie night and group dinners. The jockeys, who usually go their separate way after the races are over, bonded.

“It was a great time being with the guys,” jockey Edwin Maldonado said. “Like being in a man cave.”

It worked. By the time the meet ended without further interruption on June 21, over 1,000 COVID-19 tests had been administered to jockeys and essential employees. Not one jockey or racing employee tested positive.

Riders Up will air Friday on NBC Sports Network at 3 p.m. PT and will be shown again Saturday at 9:30 a.m. PT. It was produced by the Hennegan Brothers.RIdTTaea