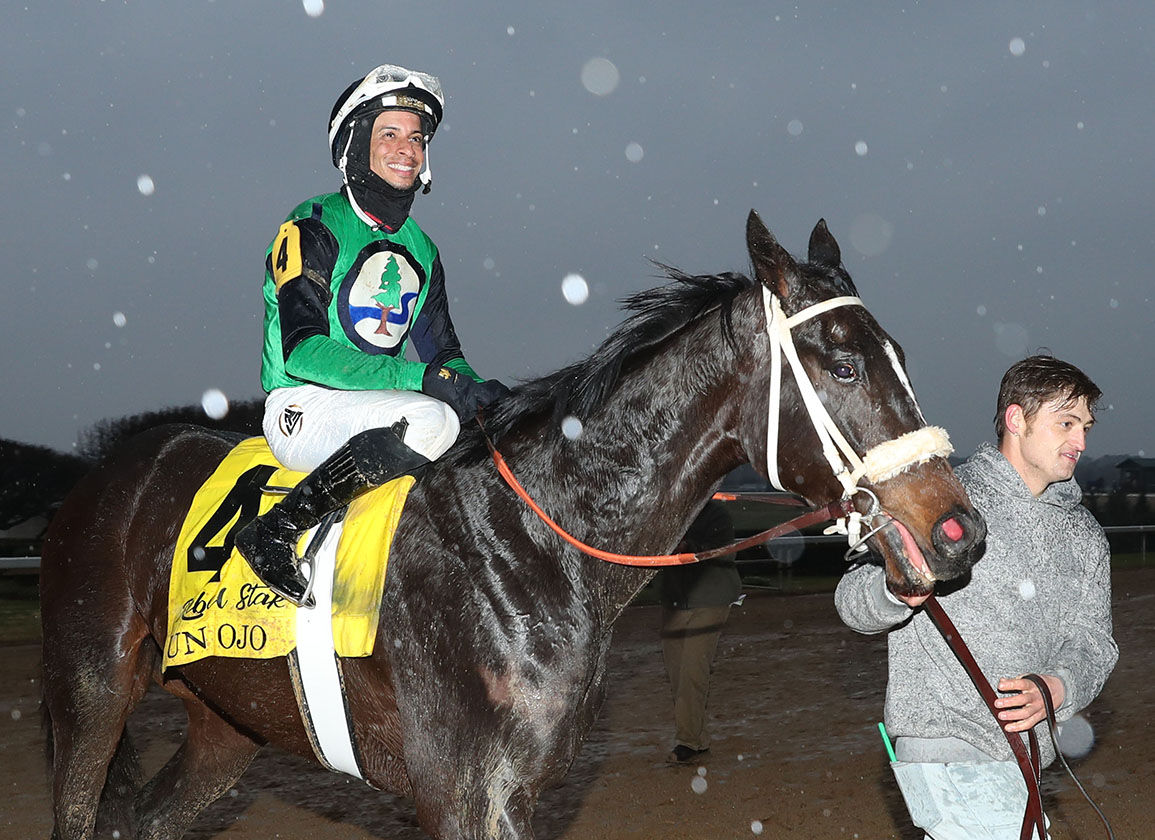 Heading into the GII Rebel S. a lot of people may not have known the name Ricky Courville. That's the way it is when you're a small-time trainer based in Louisiana who, going into the Rebel, had never had a graded stakes winner, let alone one in a $1-million race.

They know who he is now. Courville pulled off the upset of the year when winning the Rebel with 75-1 shot Un Ojo (Laoban), a one-eyed horse who now has enough points to make it into the field for the GI Kentucky Derby.

Courville was this week's Green Group Guest of the Week on the TDN Writers' Room presented by Keeneland to tell his story and the story of a horse who has surpassed all expectations after losing by 24 lengths in his first career start.

A former jockey who began training in 2008, Courville went to work for owner Cypress Creek Equine, breaking babies and training some of their cheaper horses. Eventually, owner Mike Moreno started giving him some of his better horses to train. But Courville didn't make the trip to Oaklawn for the Rebel, leaving his son Clay in charge. He tried to watch the race on his phone, but said the picture froze.

“My son calls me and he's just screaming on the phone, he's just hollering and screaming,” Courville said. “Then I started getting texts and phone calls for hours after the race. I never got to watch the race until 10:00 that night.”

“Running, he's fine,” he said. “Handling him around the barn is different. You have to watch it because it's on the side you handle him from, on the left side. Actually, when he first came in, he was really, really timid and he would brush up on you. He put himself against you where he could feel you because he couldn't see you. He wouldn't walk on the side, he'd walk behind you and nudge you with his nose all the way around the barn. But on the track, it took him a long time to really get comfortable. He was maturing late, but once he started running there haven't been any problems. He'll go inside, outside. It doesn't matter to him.”

Courville said that Un Ojo will run next in either the GI Arkansas Derby or the GI Toyota Blue Grass S.

Elsewhere on the show, which is also sponsored by Coolmore, West Point Thoroughbreds, XBTV, the Pennsylvania Horse

Breeders Association and Legacy Bloodstock, the writers discussed the latest twists in the Bob Baffert story and speculated whether or not he will win his legal battle and be able to compete in this year's GI Kentucky Derby. They also discussed last week's stakes action and the story of D. Wayne Lukas winning the GIII Honeybee S. at Oaklawn with Secret Oath (Arrogate) and previewed this coming weekend's action.

Click here to watch the podcast; click here for the audio-only version or find it on Apple Podcasts or Spotify.