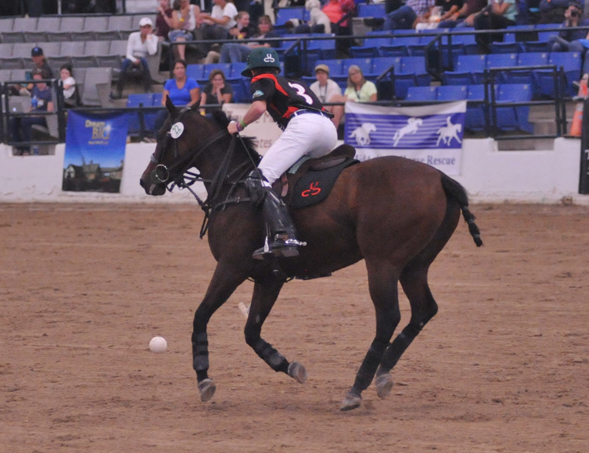 The audience in attendance and those watching the livestream texted to vote on one of 10 finalists, with Caldwell and Old Tavern taking the top honors, thanks in large part to the polo community promoting the event throughout their website and social media channels. Caldwell earned $15,500 for his efforts ($500 for being the top-placed amateur in his division, $5,000 for winning his division and $10,000 for winning the championship).

“I'm very happy with her, so pleased,” said 17-year-old Caldwell, whose twin brother, Harry, competed in the Makeover as well. “For the finale, I just sped everything up. I've never ridden a Thoroughbred that was as balanced as her, and she handled everything–the crowd and the noise–incredibly well.”

Bred by Larry F. Curtis, Old Tavern is an unraced daughter of Peak Dancer, a well-bred son of Mt. Livermore who sold for $650,000 at the Keeneland July Sale in 1998 and now stands at stud at Householder Farm in West Virginia. Old Tavern is out of the Blushing Groom mare, Blushing Madame. Caldwell said he has received several offers on the West Virginia-bred filly, including one from one of the judges of their division, but said he is going to let the excitement of his win sink in before making any decisions.

Throughout the day the top five finishers in each division (barrel racing, competitive trail, dressage, eventing, field hunter, freeestyle, polo, show hunter, show jumper and Western ranch) returned to compete for one of 10 berths in the finale, with the ultimate winner decided by text voting.

Included in the divisional winners was Late Night Mark (IRE) (Marju {Ire}) ridden by 16-year-old Isabella de Sousa, who won the show jumping division for the third year in a row. The daughter of Hidden Brook Far managing partner Sergio de Sousa, Isabella beat out 74 other competitors in the show jumping division, including CCI**** Kentucky Three-Day Event winner Nick Larkin, Olympian and World Equestrian Games veteran Ian Roberts and many other international competitors, as well as top amateurs and juniors. Bred by Swordlestown Little, Late Night Mark (IRE) began his career in Europe before being imported to the U. S. to run in the colors of Jim and Susan Hill, finishing his career with two wins from 14 starts and $74,299 in earnings.

Chapter Two (More Than Ready) also advanced into the finale after winning the dressage division. Rider Alison Wilaby said it was a team effort that helped her acquire the horse, and that team has been a big part of his training.

“I saw him in Andrew McKeever's barn and said I would love to have him when he retired. Several of my friends ride for him and know him, and I feel like I pestered all of them until I got him,” said Wilaby. “On the track he could apparently get pretty strong, so one of his exercise riders was actually the first one to school him on cross country. It's amazing to have worked so hard for so long toward a goal and have it realized.”

Out of the Saddler's  Wells mare Winds of March (Ire), Chapter Two won three of 15 lifetime starts for owner/breeder My Meadowview Stable and retired early in 2017 with $71,925 in earnings.

For a list of full results from Saturday's Thoroughbred Makeover divisional finals and of the event's overall results, go to www.retiredracehorseproject.org/live-scoring.