Rescued from Slaughter, Champion OTTB Makes Most of Second Chance 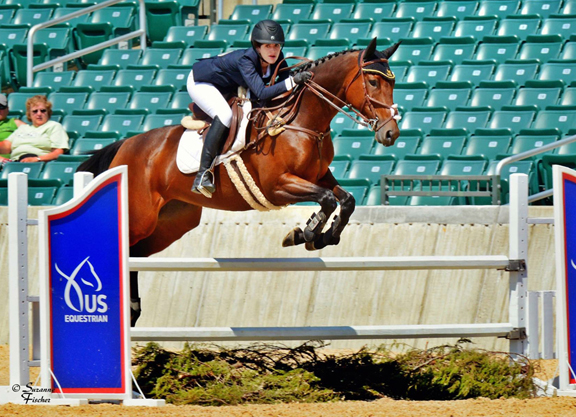 A quick glance at the race record of the Louisiana-bred mare Queen Satin shows she won three times from 18 starts and earned just over $36,000 during three years competing in low-level claiming races in Louisiana, West Virginia and Michigan. In a sense, the fact the bay mare was able to win a single race was remarkable, considering the fact she suffered from skittish tendencies and ongoing health issues that led to neglect by her handlers and eventually ended her career in 2013.

In the ensuing months, Queen Satin was passed off from person to person on a path that culminated with her arrival at the Sugacreek Livestock Auction in Ohio, where horses are frequently sold for slaughter. The mare was abused and beaten on her face while awaiting her fate in the auction pens, according to her current owner Alexa Lee, who arrived on the scene at exactly the right time.

Lee came in contact with an intermediary who purchased Queen Satin from the auction with the intention of re-training her and worked closely with the mare when she arrived at the new owner's farm. What Lee said she found, however, was that Queen Satin had avoided slaughter only to be confronted with a new, but all-too-familiar, set of challenges: her new owner became easily frustrated with the mare's nervous tendencies and often resorted to abusive tactics.

As horrendous as the situation was, Lee stayed on as a helper at the farm with the hope of eventually purchasing the mare, who often would grow so nervous that she broke out in heavy sweats.

Although the mare was out of harm's way, Lee said she still faced myriad challenges once she was in her possession. Queen Satin, who would ultimately be renamed Satins Angel, was extremely thin and became anxious whenever humans would approach her. Lee's task–which she worked at for hours each day–was to teach her horse that she “didn't have to be scared.”

After a period of instructing Satins Angel to re-learn basic elements of training, Lee began to see tangible improvement in her temperament and performance.

Satins Angel began to have considerable success at local shows in Ohio and ultimately was entered in the New Vocations All-Thoroughbred Charity Horse Show at the Kentucky Horse Park last September.

“When we went to New Vocations, I wasn't expecting much at all,” Lee recalled. “I was always just proud when she completed the course–it didn't matter to me if she was champion or not. It was her first time off the property. The loud voices and the speakers freaked her out, because I think it reminded her of the Sugarcreek auction. I just wanted her to have a good time.”

Lee said a turning point came during the jump-off round of the competition, when she sensed that Satins Angel grew nervous when confronted by the enormity of her surroundings.

“I leaned over and I said to her, 'It's okay, you're going to be okay, I promise you. You will be loved no matter what happens,'” Lee recollected.

Satins Angel responded by delivering a rousing performance and, when all was said and done, placed first of 30 entrants in the Open Jumper Stake.

By year's end, Satins Angel ranked third out of all jumpers in the Thoroughbred Incentive Program in the U.S. and Canada. As of the date of publication, less than a year had passed since Lee became the official owner of the mare.

“She's a Thoroughbred and she has the right personality and a love of it,” said Lee. “This horse loves to jump.”

As for the year ahead, Satins Angel and Lee will compete in meter 10 and meter 20 jumper events at the World Equestrian Center, while planning a return to New Vocations at summer's end. Satins Angel is also a representative for the OTTB Identity program, which helps raise awareness for the value of off-track Thoroughbreds.