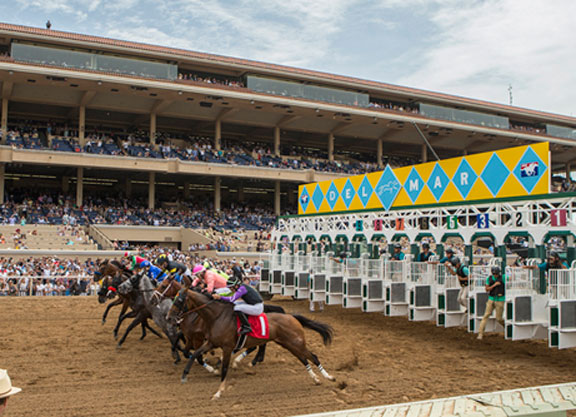 When the horses in the fourth race at Del Mar Aug. 1 crossed the wire, the final time for the mile-and-a-sixteenth turf race was posted as 1:41.18. There was no reason to believe the race was mistimed and no announcements to that effect were made, but when the official chart was released by Equibase the time was listed as 1:40.80. It happened again in the next race on the card, a mile dirt race originally timed in 1:38.60, but changed to 1:38.53 in the official chart. It didn't stop there. Over the Aug. 1-2 weekend, the times of seven races from Del Mar were updated in the chart and different from what was posted on the infield board when the horses crossed the wire. The differences were as small as .07 seconds as big as.1.19 seconds.

Some clockings were changed to slower times, some to faster times. The altered times came in dirt and turf races, in sprints and in routes.

Since Aug. 2, all turf races at Del Mar have been hand-timed.

It could be that Del Mar's timing system just had a bad couple of days, but handicappers responsible for formulating speed figures said there was a growing concern that a new timing system installed at Del Mar and 10 other tracks is producing an unacceptable number of mistimed races across the country. To time its races, Del Mar is using Gmax, which Equibase operates in partnership with the British company Total Performance Data. The system, which debuted in 2017 in the U.S. and this year at Del Mar, computes running times using GPS technology.

The team that produces the Beyer figures told the TDN that they had become so concerned about the times produced by Gmax that they were now hand-timing every race from the 11 tracks and using those times to produce its speed figures.

“We're proud that our speed figures have earned the confidence of Daily Racing Form readers over the last 28 years, and we can't risk losing that credibility,” Andy Beyer said. “If we had to work with final times that aren't precise, everything we do would be undermined. Our colleague Randy Moss developed a method for timing race videos on a computer, and we trust those times more than we do a GPS system.”

Upon learning that there were problems with the times of the Aug. 1 and 2 races at Del Mar, the Thoroughbred Idea Foundation reached out to the California Horse Racing Board and asked it to investigate the situation. At deadline for his story, the TIF told the TDN that they had not heard back from the racing board.

Moss, an analyst on NBC's horse racing coverage, is part of the Beyer team and has been leading the effort to hand-time the races from the Gmax tracks.

“We have discovered that the final times, which is really all you are concerned with when making speed figures, from these tracks are not accurate enough at Gmax tracks to enable us to publish accurate speed figures,” Moss said. “For the last month plus, we have been using our own times generated by video timing instead of the final times posted by the Gmax timer.”

A similar situation also surfaced July 15 and 16 at Canterbury Park. From a nine-race card, six times that were posted when a race was concluded were changed in the official charts. The same thing also occurred again on the 16th when the times of seven races were adjusted in the final charts. According to Moss, there have been at least 100 instances at the Canterbury meet where the official final time had to be adjusted after problems were found with the Gmax time.

“There has been a learning curve with a new install of that type of system,” said Canterbury Vice President of Racing Operations Andrew Offerman. “We definitely have been working closely with the vendor to try to understand how the system works, what kind of quirks they have run into. We're trying to better identify what challenges they are seeing and then being able to provide them with as much information as I can. There are some things that need to be worked through, no doubt.”

According to the website theracingbiz.com, 10 track records were set at Laurel from Feb. 3, 2019 through June 8, 2019, after the GPS system was installed. Laurel clocker Jack Harmon told the website that he continued to use the teletimer system as a backup and found that in all 10 cases the Gmax time was faster than what was recorded by the teletimer. Laurel briefly stopped using the Gmax system, but is once again using it.

Moss said that there have been instances where the Beyer figure for a race winner has changed by as many as 20 points after the official time was adjusted and the Beyer team went with its hand timing.

Jerry Brown, who operates the Thoro-Graph speed figure and data service, said he is in the process of reevaluating the numbers from the Gmax tracks and also expressed concern about the situation.

“We have seen instances where published times were way off the hand time that our clockers get,” Brown said. “Equibase sent us a list of discrepancies they found early in the meet at Del Mar, but the problem there seems now to have been fixed. I am still trying to get hold of all the information I need at other tracks, but I am definitely concerned, since there is only one industry source for the information. The economic engine of the industry is completely driven by handle, and serious horseplayers are sophisticated. It is crucially important for handicappers to have accurate information, and the less sure they are of the information they are getting the less they are going to bet.”

Traditionally, timing at most racetracks was done with a teletimer, an electronic timing system that uses invisible beams that are tripped when a horse crosses them. The primary company using beams to record times is American Teletimer. Equibase has also purchased that company's U.S.-based timing assets.

Starting in 2006, Trakus offered an alternative to tracks with new technology that used chips placed inside the horse's saddle cloths and antennas to track the movements of horses and record their times. (Barry Weisbord, the founder of the TDN who served as its publisher from its inception until 2018, is the Chairman and principal owner of Trakus.)

In 2018, it was announced that Equibase had partnered with the English company Total Performance Data and had installed the GPS system developed by that firm at Woodbine, Golden Gate Fields, Laurel Park and Pimlico, Currently, on its website, Total Data Performance also lists Canterbury, Colonial Downs, Del Mar, Mahoning Valley, Oaklawn, Penn National and Sam Houston as clients.

The sales pitch from Equibase, a subsidiary of The Jockey Club, to the racetracks has been that Gmax can do a lot more than time races and do so at a fraction of what it costs to install and operate Trakus.

“Timing races is just a very small part of the GPS offering,” Equibase President and COO Jason Wilson said in a response to questions emailed to him by the TDN. “Automated tracking systems like Gmax produce positions for every horse in a race at every point in a race, and this provides several benefits. First, it can provide times for each horse at each point of call and all points in-between. Traditional timing systems only capture the lead horse at each point of call. Second, it can power more dynamic video graphics making the racing visual experience more like what we see for other sports and providing a more engaging experience. Third, it can provide 'data depth' –more detailed information about the race: speed, acceleration, stride length, frequency and distance traveled. Fourth, the data opens up new bet types such as in-running betting. We want to help racetracks produce live data that will drive wagering innovations so that horse racing is ready to compete in a much more competitive landscape when sports betting takes off in the U.S. Finally, automated tracking can provide better workout data, where the method of clocking has not changed in more than 100 years.”

But how accurate is Gmax and what level of inaccuracy is acceptable? That's where the debate gets contentious.

“I am very confident in Gmax's ability to produce accurate times,” said Wilson, who went on to question the process of hand timing a race after the fact.

“I know some have questioned times based on reviewing race replays,” he said. “This is not a great way to time races as camera angles, different races distances, run-ups and rail movements make it difficult to determine that start line unless you are working closely with the track.”

Equibase Executive Vice President Dave Siegel said he has fielded complaints from Beyer, Moss and others who make speed figures and does acknowledge that there have been some issues with Gmax. But he defends the technology and says that it is highly accurate. He argues that whatever problems there might be are being blown out of proportion.

Siegel goes on to argue that it's not reasonable for the figure-makers to expect 100% accuracy when it comes to times.

He added that Gmax's other attributes can't be overlooked when it comes to the debate about the accuracy of final times.

“This really, really comes down to the overall good of racing and what GPS can do for all the different factions,” he said. “Is this accuracy the figure-makers require an absolute need? The answer is, it is for them. We are working to try to satisfy them and the racetracks in making system we have more accurate.”

For now, whatever problems Gmax may be causing appear to be isolated incidents. It is at only 11 racetracks, definitely gets more races right than it gets wrong and at least some of the apparent mistakes have been corrected. But as Equibase continues to sell Gmax to more and more tracks, might that mean a slew of incorrect times and headaches handicappers and the industry? Might bettors lose confidence in the overall accuracy of race times?

“If this spreads to where it becomes the de facto official timer for the sport it will set the sport back 80 years in terms of accurate times,” Moss said.

This past weekend again at Del Mar, the Equibase charts indicated that the races on the turf had been hand-timed. Pat Cummings published that information on Twitter, and said that the TIF would be addressing the matter in a forthcoming publication.

Equibase answered the Tweet, posting, “Hand times were used over the weekend as Gmax and Del Mar were validating information with respect to start lines, rail settings and lanes.”

The reply prompted the following Tweet from Cummings. “Thanks for the response, but this is wholly unacceptable to wagering customers and horsemen. It's clear DMR wasn't ready to switch to Gmax timing. We shouldn't have less accurate times now than in past. As tech improves, accuracy should too.”