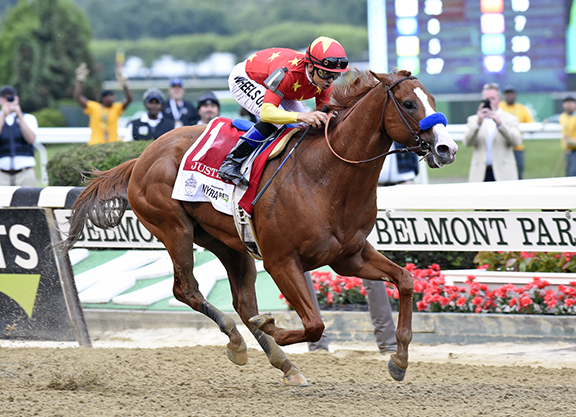 In a story written by Joe Drape, The New York Times is reporting the 2018 Triple Crown winner Justify (Scat Daddy) failed a drug test April 7 after winning the GI Santa Anita Derby and alleges that the California Horse Racing Board (CHRB) should have taken the win away from the horse in an expeditious manner. Had it done so, Justify would not have had any Kentucky Derby points and would not have made it into the field of 20 for the Derby.

“I will tell you this, Joe knows better,” Arthur said. “Joe thought he had a story and he wrote it the way he wanted.”

Drape wrote that Justify tested positive for a drug called scopolamine after winning the April 7 Santa Anita Derby. He alleges that the CHRB did not inform Baffert of the drug positive until nine days before the running of the Kentucky Derby and then let the matter drag on until after he finished off his Triple Crown sweep in the GI Belmont S. June 9. Eventually the CHRB dropped that case altogether.

Arthur would not confirm that the horse had tested positive and referred that question to other CHRB officials, none of whom were available for comment. He did downplay the effects scopolamine can have as a performance-enhancer and said that when it shows up in a horse's system, it is usually the result of environmental contamination.

Elliott Walden, CEO and Racing Manager of WinStar Farm, a co-owner of Justify during his racing career, said he would have no comment at this time. Reached by text, Justify's trainer Bob Baffert also declined to comment but said he would make a statement Thursday.

The Times maintains that had the CHRB dealt with the positive within the usual time frame it takes to levy penalties and suspensions, the horse would have been disqualified from the Santa Anita Derby before entries were taken for the Kentucky Derby and therefore would not have been able to run. Arthur said this premise is the major flaw in the Times's story.

“The fact of the matter is, even a high bute case can take 60-90 days to resolve,” he said. “There's no way this case could haven been resolved prior to the Kentucky Derby, which would have been the only grounds for removing the points. This article show Drape's ignorance of the regulatory process and due process allowed to licensees.”

CHRB Executive Director Rick Baedeker told the Times: “There was no way we could have come up with an investigative report prior to the Kentucky Derby. That's impossible, that would have been careless and reckless for us to tell an investigator what usually takes you two months, you have to get done in five, eight days. We weren't going to do that.”

However, Drape wrote of the drug positive: “That meant Justify should not have run in the Derby, if the sport's rules were followed.”

Drape conferred with Dr. Rick Sams, former head of the drug lab for the Kentucky Horse Racing Commission, and reported that Sams claimed scopolamine can be used as a bronchodilator that will clear a horse's airway and optimize its heart rate. According to Drape, Sams said that 300 nanongrams per mililiter was found in the horse's system, an excessive amount that “suggested the drug was intended to enhance performance.”

Drape does not make it clear why someone from the Kentucky Horse Racing Commission would have detailed knowledge of a test performed by the CHRB.

As Justify continued on to win the GI Preakness S. and the GI Belmont S., the story remained in the dark. He never ran again after the Belmont.

Eventually, the CHRB let the case drop, deciding that the drug likely showed up in the horse's system through environmental contamination and loosened its rules on scopolamine positives.

Scopolamine is listed as a “4C” drug by the Association of Racing Commissioner's International. 4C drugs are considered the least serious of all drugs that are prohibited in horse racing. The ARCI's recommended penalty for any trainer's first offense with a 4C drug is a minium of a written warning to the maximum of a $500 fine. However, the presence of even such a minor drug can result in the disqualification of a horse.

Scopolamine is found in jimson weed, which grows wildly, and has been known to inadvertently get mixed into a horse's feed. Arthur believes that is precisely what happened with Justify.

“Jimson weed is a weed we see in California not infrequently,” he said. “This is not a case of someone drugging a horse. This is a case of a horse poisoning. The source of it is a poisonous plant.

“The Board, on my and the executive director's recommendation, made the correct, appropriate and the gutsy decision to dismiss the case,” Arthur said.