Country House Out of Preakness With Fever 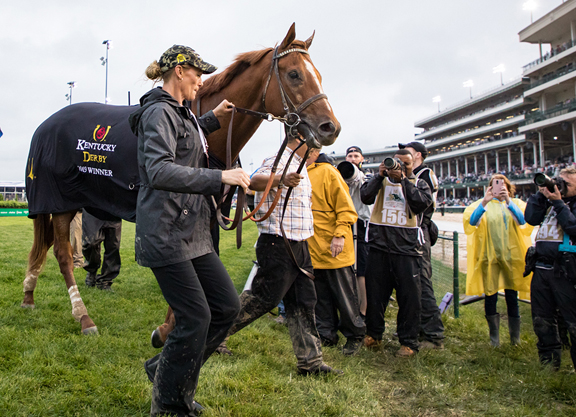 GI Kentucky Derby winner and 'TDN Rising Star' Country House (Lookin At Lucky) has been ruled out of a start in the GI Preakness S. May 18 after coughing and developing a fever, trainer Bill Mott told TDN Tuesday. The story was first reported by Daily Racing Form.

“He was coughing and we decided to do a complete blood profile right away and see if we could determine if anything was changing, and it was,” Mott told TDN. “The blood profile was abnormal and from this morning until now, he has developed a little bit of a fever.”

Mott added that Country House likely has some kind of infection that, while not expected to shelve him for a long time, could put his status to run in the GI Belmont S. in jeopardy.

“I think the blood work indicated that there was an infection of some sort going on,” the Hall of Fame conditioner said. “It could be a viral deal, you can get a change in the blood profile with a viral deal going on, and then of course a fever can go along with either a bacterial infection or a viral infection. There might be a slight bacterial change going on because the white [blood cell] count was a little elevated. It's not a normal blood profile, and with the fever and the cough, that all [takes him] off the training list and off the Preakness trail. This is a minimum of a week to 10 days. You never know, it could even mean that he doesn't run in the Belmont.”

Country House is the first Derby winner not to run in the Preakness since 1996, when Grindstone (Unbridled) was retired with a knee injury.

Mott reflected on the roller coaster of Saturday's unorthodox Derby leading up to Tuesday's development, and said his greatest satisfaction came simply from how well Country House performed, regardless of his finishing position or Triple Crown status.

“The most elated and happy we were was when I bumped into my son in the tunnel and we were celebrating, and that was when we finished second,” he said with a laugh. “After that, it was all downhill from there. It's such a strange scenario; it's hard to imagine that you'd be as happy finishing second as you would be winning. I don't think the excitement amongst ourselves really rose any more just because they put his number up. I think the most excited we were was just the way the horse performed. It wasn't the fact that we got the W or the winner's trophy, it was the result of everybody's hard work and the fact that the horse really showed up on that day.”

DRF also reported Tuesday that Code of Honor (Noble Mission {GB}), placed second in the Run for the Roses, would skip the remaining legs of the Triple Crown and point to the GIII Dwyer S. July 6 at Belmont. 'Rising Star' Improbable (City Zip), who crossed the line fifth, but was placed fourth in the Derby, was confirmed as a Preakness starter Monday, with Mike Smith to ride. Maximum Security (New Year's Day), first home, but placed 17th in the Derby, has already been ruled out of the Preakness by owner Gary West, who is attempting to appeal the Derby disqualification.