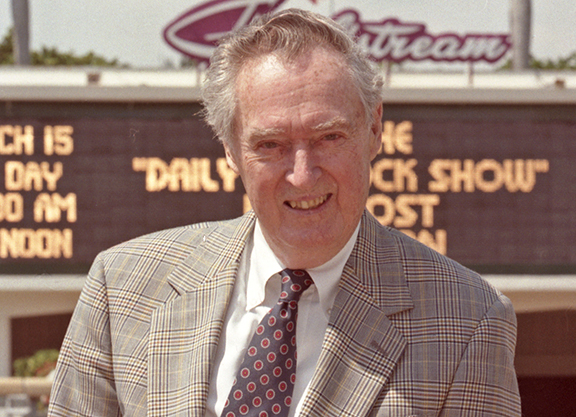 Tommy Trotter at Gulfstream in 1997 | Equi-Photo

Tommy Trotter, whose 56-year career encompassed decades as one of the sport's most acclaimed racing secretaries, died Sunday in Aventura, FL, after a brief illness.

In addition to his renown as a racing secretary, he was a widely respected handicapper who stamped the immortal careers of Kelso, Forego and other champions by assigning them forbidding amounts of handicap weight that served to certify their greatness.

“When I think of Tommy Trotter, I think of Jimmy Kilroe,” said Tom Robbins, executive vice president for racing at Del Mar. “For those that remember Jimmy Kilroe, nothing more needs to be said. Simply put, Tommy was one of horse racing's truly great professionals and gentlemen.”

Born Sept. 21, 1926, approximately one mile south of Churchill Downs in Louisville, Trotter's deep-seated passion for racing was inscribed in his genes. His father, Charles Hildreth (Tobe) Trotter, was a trainer, as were his grandfather and great-grandfather. Trotter's mother, Helen Hoffler Trotter, had a brother, Jimmy, who was a jockey. Another uncle, Jimmy McGee, was a leading trainer.

Tobe Trotter's longstanding friendships allowed his son to rub elbows with and receive a first-class education in the sport from several of its most revered figures, including John Blanks Campbell, who many consider the turf's greatest racing secretary, Francis Dunne, Julius Reeder, Jimmy Ross and Kilroe.

In 1945, at age 18, Trotter commenced work as a clerk in the secretary's office at Fair Grounds in New Orleans. That led to his first racing duties in New York as Campbell's secretary. In 1959, Trotter succeeded Kilroe as racing secretary when the latter opted to return to California.

Trotter estimated he was employed by 22 racetracks during his career. That included working for, and being fired by, Marje Everett at Arlington Park in Chicago, where he was hired in 1954 (and to which he would eventually return), before going to work for her again decades later at Hollywood Park in California.

Known for packing on weight in an era when handicap races were a cornerstone of the turf, Trotter encountered no complaints from many of racing's most prominent owners–Vanderbilts, Whitneys and Phippses among them. Winning with top weight while conceding pounds to one's rivals served to validate the greatness of an owner's prized runner.

Given the inherent difficulty in compiling a condition book that will never garner unanimous praise from both horsemen and management, it remains an enduring Trotter hallmark that he enjoyed decades-long friendships with owners and trainers.

Trotter's friendships with Kelso's owner, Allaire duPont, and trainer Carl Hanford, never suffered as their champion gelding-the only horse to win five consecutive Horse of the Year (1960-'64) titles-carried 130 pounds or more to the winner's circle 12 times during his Racing Hall of Fame career.

“Allaire just took it,” Trotter said, referring to his weight assignments. “And we were always good friends. It was exactly the same with Carl Hanford; we were friends for the rest of his life. We even wound up in the steward's stand together at Delaware Park.”

During a round of golf with trainer John Nerud, Trotter said they discussed his weight allocation to Dr. Fager for a handicap race in 1968.

Just before launching his drive off the tee, Nerud remarked, “Put on him whatever you want. I don't care.” After Dr. Fager duly won, Trotter quoted Nerud as saying, “You should have put more weight on him.”

Further evidence of Trotter's handicap acumen was Dr. Fager's half sister, Ta Wee, who also raced in the colors of Tartan Farms' owner William L. McKnight and would join her half brother in the Hall of Fame.

Ta Wee won back-to-back renewals of the Fall Highweight H. at Aqueduct in New York. Carrying 130 pounds to victory against males in 1969, the most ever carried by a 3-year-old filly, she affirmed Trotter's handicap prowess the next year when the hickory-tough daughter of Intentionally won the race again, this time toting an impost of 140 pounds.

Two other particularly meaningful friendships, among scores of them, were with actor and longtime owner-breeder John Forsythe, a passionate racing fan himself, and Hall of Fame trainer H. Allen Jerkens.

In an interview for The Florida Horse, Jerkens told the author he was particularly appreciative of Trotter's help in 1962 when, after being interviewed in New York by Hobeau Farm's Jack Dreyfus, his new patron sent him half a dozen horses.

With no stalls to accommodate them, Jerkens headed straight for the racing secretary's office. Trotter promptly instructed Jerkens to place his horses in the receiving barn. Problem solved.

Only a few years into his racetrack career, Trotter's character and resolve were tested by tragedy in 1948. When racing shifted from Hialeah Park to Tropical Park, Tobe Trotter, jockey Albert Snider, and a prominent Canadian owner set out to fish in the Florida Keys from a small skiff Mar. 5.

A sudden, ferocious storm swept over the area near Sandy Key, and no trace of the fishing party or their boat was ever found. Snider was the regular jockey of Citation, 1947's Horse of the Year, and Calumet Farm's Warren Wright commissioned a search by aircraft. The search for Tobe Trotter, Snider and Donald Frazier ended Mar. 9. Citation would win the year's Triple Crown with Eddie Arcaro in the saddle.

Trotter pressed on to burnish his father's legacy in the succeeding decades. Making his mark in myriad ways, Trotter compiled the Experimental Free Handicap by himself from 1962-'71, and continued his involvement through 1989.

An inaugural member of the North American Graded Stakes Committee in 1972, upon which he served for many years, Trotter was director of racing at Arlington Park in 1984-'85 and chaired the selection committee for a new event, the Arlington Million. He also served as a steward in the 1970s at both Delaware Park and Atlantic City Race Course. He would conclude his career as a steward at Gulfstream Park in 2001.

Above all else, Trotter earned the universal respect of horsemen.

“Tommy always exuded class, and it never wore on you,” said Hall of Fame trainer Nick Zito. “I am not sure there is anyone like him in racing today, anyone who has what he did. You would see him walk by and someone would remark, 'There goes Tommy Trotter.'”

Trotter is survived by his wife, Eleanor (Ellie) Gordon Trotter of Aventura. He had six children (four sons, two daughters) by his first wife, Sally Quinerly Trotter, who died in 1999. He was predeceased by a son, Barry Trotter, an equine dentist, who passed away in 2012.

A viewing will be held Feb. 27 from 5-7 p.m. at Scarano Funeral Home in Hollywood Beach, FL, with a mass at 10 a.m. the following morning at Saint Matthew Catholic Church in Hallandale Beach.