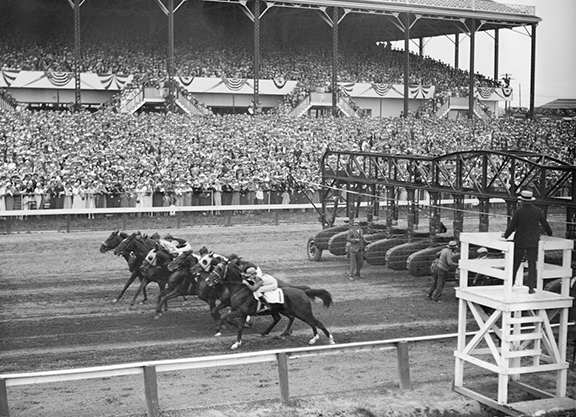 Lynne Snierson spent 15 seasons at Rockingham Park as the track’s director of communications from 1995 through 2009 and reflects on the track’s history in this column.

Lou Smith must be spinning in his grave.

Rockingham Park’s late and larger than life former owner, who turned the track into what was regarded as “Little Saratoga” in its glory days, would surely be dejected by the news that the 116-year-old track has been sold for development and is shuttering its doors for good.

The rest of us who share a long and loving history with “The Rock”, the eighth oldest Thoroughbred track in America, certainly are dismayed that Aug. 31 is the end date.

Even though I wasn’t surprised–after all, I witnessed the end of live Thoroughbred racing in 2002, watched the last harness horse depart in 2009, saw what was once the stable area sold to a local developer and demolished, and knew the rest of the property was on the market–the finality of it all hit home. Hard.

“It’s one of those places, like the house you grew up in, that you think will always be there. It’s so strange and sad to find out that it’s really going to be gone,” said Donna Barton Brothers, who was an apprentice in Rockingham’s jockey colony in 1987 before she went on to become one of the sport’s most successful female riders and an on-air analyst and reporter for NBC Sports and TVG.

“That track was where I cut my teeth as far as riding goes,” she said. “I learned so much about riding there from people like Phil Ernst and Bennie Carrasco and some of those really good, old riders like Carl Gambardella and Rudy Baez, who for whatever reason ended up at Rockingham. I rode with some world class riders.”

Speaking of the greats, old black-and-white photos of Eddie Arcaro, Johnny Longdon, and Bill Shoemaker still adorn the walls of Rockingham’s clubhouse from their time here. Pat Day hung his tack in the jocks’ room when he was a bug, and Chris McCarron to this day is revered as the local kid who made good.

Trainer Shug McGaughey won his first race at Rockingham and fellow Hall of Famer Bobby Frankel captured the one and only $500,000 New England Classic with Marquetry in 1991 as part of the nationally televised American Championship Racing Series.

Dr. Fager and Roman Brother, each a Horse of the Year in the 1960s, won the New Hampshire Sweepstakes in that race’s earliest days, and 1985 Filly Triple Crown winner Mom’s Command made her debut a success in a stakes race at The Rock. Seabiscuit’s beginnings weren’t as auspicious; with Red Pollard up, they lost all five starts during the horse’s juvenile season in 1935 when based here.

In more recent times, Little Silver Charm, the official “spokeshorse” for equine rescue at Old Friends, came from Rockingham. After Lorita Lindemann, now an assistant trainer in New York, pulled him off a van headed to the kill buyers, he was a backside mascot until Michael Blowen eventually took him along when he established Old Friends in Kentucky.

Incidentally, at the time Blowen was working as a groom for a claiming trainer in addition to his regular job as a successful Boston Globe columnist.

Looking back through the decades, contributions of major significance to the industry had their genesis at Rockingham.

Smith, who was affectionately known as “Uncle Lou” when he owned the track from 1931 until his death in 1969, was a founding father of the HBPA in 1956 and the idea for the national organization was said to have been hatched in the track kitchen. In 1958, Smith was the Jockey’s Guild Man of the Year because Rockingham was the first track to offer insurance for riders and institute other measures to benefit their safety and welfare.

But that is all just part of the glorious past now.

Rockingham’s once lush and verdant turf course, considered by horsemen to rival only Keeneland’s, has gone completely to seed and the main track is equally untended and overgrown with weeds. In three months, the last simulcasts will be shown in the clubhouse, which has been in disrepair for years. The remaining 120 acres of the property were bought by the same developer who acquired the stable area’s 50 acres and now face an unknown fate.

The end of August will be the sad end of the line for the last of the employees. They’ll join so many of us who remain extremely proud to have been part of the Rockingham family.

“I’m grateful that I still have the win pictures,” said Barton Brothers.

And I’ll always be grateful for the memories.