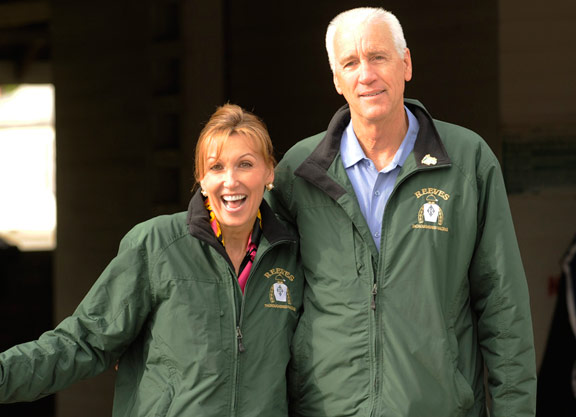 TIMONIUM, MD – Mucho Macho Man (Macho Uno), winner of the 2013 GI Breeders' Cup Classic, is represented by his first crop of 2-year-olds this year and the 10-year-old stallion is enjoying quick success on the racetrack and in the juvenile sales arena. He was represented at the OBS March sale by a $575,000 colt (hip 282) and his highest-priced filly to date, Mucho Amor (hip 549), who sold for $260,000 at that same auction, was a first-out winner at Keeneland in April. He could be poised for another big result in Timonium next week after his son (hip 278) turned in the fastest quarter-mile breeze (:21 1/5) so far at the under-tack preview of the Fasig-Tipton Midlantic 2-Year-Olds in Training Sale.

The early success is no surprise to Dean Reeves, who with his wife Patti, campaigned Mucho Macho Man to wins in the GI Awesome Again S. and GII Suburban H., in addition to his Breeders' Cup victory and a third-place finish in the 2011 GI Kentucky Derby.

“It wasn't a total surprise to see his first starter win because he won as a 2-year-old himself and ran a lot of races, but it was very encouraging to see that,” Reeves said. “We've been really impressed. I think you've seen it in the March sale, the numbers that people are getting for his offspring. And then for them to turn right around and win first out at Keeneland, which is not an easy thing to do. Tthen to turn around at this Timonium sale and have the bullet work for a Mucho Macho Man colt. They are just impressing everywhere.”

Reeves has been actively supporting Mucho Macho Man and will be offering a pair of pinhooking prospects by the stallion, who stands at Adena Springs for $10,000, at the Midlantic sale. Through the Top Line Sales consignment, Reeves will offer a filly (hip 14) and a colt (hip 133) during Monday's first session of the two-day sale.

“I wanted to pinhook a couple of the Mucho Macho Mans to get them out in the marketplace,” Reeves said. “So those two we earmarked to do that with and we've followed suit. With his first crop of runners, my goal was to spread the horses out, get them to different trainers, different areas of the country, racing at different locations, so we could spread them out and hopefully get to see the offspring and hopefully they are successful and it helps our stallion.”

Hip 14 is the first foal out of the unraced Wabanaki (Indian Charlie), a half-sister to stakes winner Held Accountable (Exchange Rate) and to graded stakes placed In Harm's Way, and from the family of champion Wavering Girl. The filly, who worked a furlong in :11 1/5 at the under-tack preview, was a $50,000 purchase at last year's Fasig-Tipton New York-Bred Yearling Sale.

“I thought she had a real nice body on her, as young as she was then,” Reeves said of the late March foal. “I thought she had a good walk, which is what he is putting into all his foals. She was also a New York-bred, so I thought when we came back around [to resell], we had spotted this sale and it would put a Mucho Macho Man in the middle part of the country for somebody who wanted a New York-bred. So for me, it isn't where I race a lot–I'm more in Florida–but still, we thought she would have regional appeal and we'd be able to get one of the foals into this sale.”

Hip 133 is a son of Carolina Sunrise (Awesome Again) and a half-brother to Grade I placed Reveron (Songandaprayer). His second dam is multiple graded stakes winner Stylish Star (Our Native). The colt, who worked a quarter in :23 flat, was purchased for $55,000 as a Fasig-Tipton November weanling.

“We bought him as a weanling and there again we were supporting the stallion early by buying some of his weanlings,” Reeves said. “He has matured right along and he is continuing to grow. If you watch his work, he had a good stride and good movement and I think he'll get better and better.”

Dean and Patti Reeves's Reeves Thoroughbred Racing was formed in 2009 and the couple could hardly have imagined going to the Kentucky Derby just two years later and ending up in the winner's circle at the Breeders' Cup a further two years along. Reeves is clearly enjoying watching his stable star's successful start at stud.

“I can't tell you how exciting it is,” Reeves said. “It's exciting to see other people's reaction–when you're around the track and you overhear someone say, 'That is one beautiful Mucho Macho Man colt.' I do take a lot of pride in that. It's nice to see the marketplace starting to recognize his foals. This was a great racehorse. He raced early and he raced until he was six and he came to run every time he was there. That's what his offspring are going to look like and do, I think. It's very exciting to see him start to be successful.”