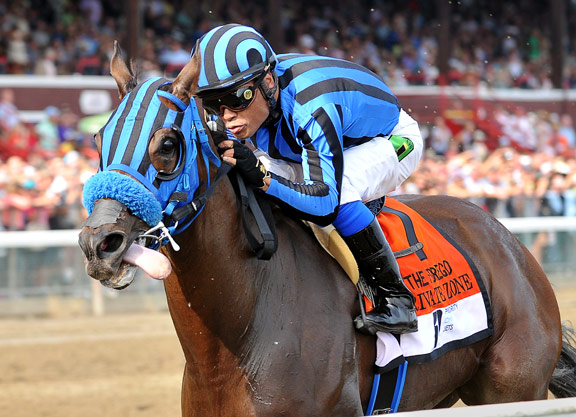 It’s 2016 and, so far as crimes go, smoking a little weed is somewhere up there between littering and jaywalking. In Alaska, Colorado, Oregon and Washington, smoking marijuana isn’t even illegal. Yet, according to the Daily Racing Form, since trainer Brian Lynch allegedly tested positive for marijuana, the New York Gaming Board has ordered that his Grade I-winning sprinter Private Zone (Macho Uno) has to be scratched from Friday’s GII True North S. at Belmont.

“I think it shows a rather extreme and not thoroughly logical application of racing regulations,” said Frank Becker, an equine law specialist in Lexington, Kentucky and author of “Equine Law,” the leading treatise on the subject.

It seems that the Gaming Board can test any licensed backstretch worker anytime it wants. With Lynch, his attorney Drew Mollica and Gaming Board officials all keeping quiet Wednesday, we’re left to speculate that the trainer was chosen at random to be tested. In the wrong place at the wrong time.

Lynch is a licensed trainer in New York, so he has given the Gaming Board the right to test him, but why did the Gaming Board bother to do so? Jockeys? Yes. For safety concerns, they can never be allowed to ride under the influence of anything stronger than a Mountain Dew. But trainers? For pot? Who cares? There just isn’t any justification for going around and testing them to see whether or not they had done something as innocuous as smoking a joint.

Perhaps an owner should not want his or her horses being trained by someone who smokes an illegal drug, but that should be between the trainer and the client. Rene Douglas, who represents Private Zone’s ownership group, Good Friends Stable, apparently isn’t concerned about Lynch’s habits as he told the DRF, “I’m not mad at Brian, I’m human too.”

The real problem here, though, is not that Lynch personally got hit so hard for such a minor offense, but that the owners paid such a steep price. This is a Grade I winner that was going to be the favorite in a $250,000 race. The Good Friends Stable did nothing wrong, but it has been levied what amounts to one of the most substantial penalties you’ll ever seen in racing. They didn’t have the opportunity to transfer the horse to another trainer because it had already been entered under Lynch’s name for the True North when he allegedly tested positive for marijuana. That’s not right. If they want to continue going around digging under rocks to find people who committed the most minor of infractions then they’re going to have to find a way to not make the owner and the horse pay the price for something they had no control over.

And how ironic is it that they nailed a trainer who appears to be perfectly legit when it comes to what drugs he uses on his horses? Lynch has just one violation on his record, a Class C positive in 2012 in Kentucky that was such a minor deal all he received was a $500 fine. In a game overrun with cheating, they nailed a guy who doesn’t appear to be a cheater. Perhaps their resources could have been better spent going after the real bad guys, the people that dope horses, and not some poor guy who smoked some pot.

When someone there is ready to speak, the Gaming Board may tell you that rules are rules, that Lynch tested positive for marijuana and therefore had to temporarily give up his license, that a horse entered under the name of an unlicensed trainer can’t run. Yes, there are rules, but there’s also common sense, not to mention what’s fair and what’s not. For so many reasons, this is idiotic. Private Zone should never have been scratched.