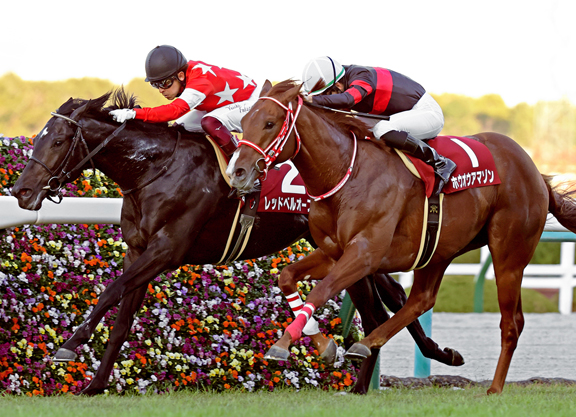 Red Belle Aube (Jpn) (Deep Impact {Jpn}) looks to give his legendary late sire a fourth winner of the G1 Asahi Hai Futurity S. in the last seven years as he takes on 15 other rivals in the 1600-metre event that will go some way towards determining year-end honors.

“He's not so different than he was for his last race, but he is getting bigger,” said his jockey Yuichi Fukunaga. “He's got speed which should see him do well here over a mile, although like his brother, there is a slightly difficult side to him.”

Mondreise (Jpn) (Daiwa Major {Jpn}), whose sire was responsible for the recently retired 2018 Asahi Hai winner Admire Mars (Jpn), looms an interesting longshot price with Christophe Lemaire at the controls. No worse than second in his four starts to date, the bay colt steps up in class off a neck defeat of Lord Max (Jpn) (Deep Impact {Jpn}) in the G2 Keio Hai Nisai S. (1400m) at Tokyo Nov. 7.

Dura Mondo (Jpn) (Duramente {Jpn}), whose sire is in the thick of the battle for leading Japanese freshman sire, is undefeated from two runs and faces a stiff class test Sunday, but is well backed to negotiate the jump.

Stella Veloce (Jpn) (Bago {Fr}) is well in the markets off a convincing three-length success in the G3 Saudi Arabia Royal Cup at headquarters Oct. 10 when he seemed to relish soft underfoot conditions.