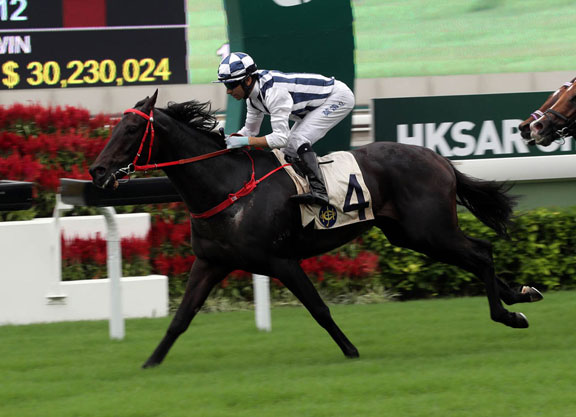 For the third time in two weeks, a tropical depression was due to wreak havoc on metropolitan Hong Kong, the latest weather system causing at least a bit of consternation at the Hong Kong Jockey Club, which was set to stage its season-opening program Sunday afternoon at Sha Tin Racecourse. But the weather gods cooperated, during the daytime hours at least, and better than 66,000 racegoers wagered HK$1.294 billion (US$165.4 million), a record for an opening-day fixture.

“We are extremely happy with the start to the season, with record turnover for this day 6.5% percent higher than last season. This should be a good omen for the season, going forward,” commented HKJC CEO Winfried Engelbrecht-Bresges. “The economy is moving pretty well, so we are optimistic about the season ahead and the results today give us confidence. The commingling turnover was HK$104 million today, up from HK$57 million last year, which obviously shows that the commingling trend, as expected, continues to be strong.”

Leading rider Joao Moreira was off to his typical flying start Sunday, guiding the winners of the day's first five events, including a victory aboard the classy and promising Seasons Bloom (Aus) (Captain Sonador {Aus}) in the featured Class 1 HKSAR Chief Executive's Cup H. Settled one from the rear early on, the newly turned 5-year-old peeled out at the top of the stretch and threw in a final 400m in :21.52 (last 800m in :43.41) to defeat the G1 Sprinters' S.-bound Blizzard (Aus) (Starcraft {NZ}) by 1 1/2 lengths while in receipt of 16 pounds from the topweight (video).

“He's a miler and that's where we're aiming, the international Mile in December,” trainer Danny Shum confirmed. “He'll run next on 1 October, in the race over 1400 [metres],” he said, referring to the G3 Celebration Cup H.

It was a day of firsts in other regards as well:

• Riding his first card as retained jockey to the John Moore stable, Tommy Berry was off the mark in the day's seventh race with a half-length success astride 7-1 gamble Hair Trigger (Aus) (Smart Missile {Aus}) in a Class 3 down the Sha Tin straight (video).

• Trainer Frankie Lor, the long-time assistant to leading trainer John Size, also tasted success at his first meeting since striking out on his own. The conditioner was able to secure Moreira's services for 32-start maiden Yourthewonforme (NZ) (Sufficient {NZ}) and the duo teamed to land a Class 5 by a comfortable 1 1/2 lengths (video).

• Household King (Aus) (Hussonet), who established a new record when selling for HK$10.5 million (US$1.34 million) at the Hong Kong International Sale this past March, got his career off on a high note with a popular success in race four. Sent off the 2.2 (6-5) favourite with Moreira at the controls for Shum, the 4-year-old was allowed to dictate his own pace and had plenty left to defeat the Moore-trained/Berry-ridden Rewarding Flyer (NZ) (Thorn Park {Aus}) by a cosy 2 1/2 lengths (video), despite giving the runner-up nine pounds.

With the retirement of former Horses of the Year Designs on Rome (Ire) and Able Friend (Aus) and fan favourite Blazing Speed (GB) together with the tragic late-season loss of Triple Crown winner Rapper Dragon (Aus), there is a void to be filled in Hong Kong. But the CEO sees the glass as half-full.

“What is particularly satisfactory is that we have seen some good up-and-coming horses today, which is important,” Engelbrecht-Bresges added. “This will be a year of change, where we have, hopefully, a lot of young horses coming through. Today is encouraging because we saw some horses with very good potential.”