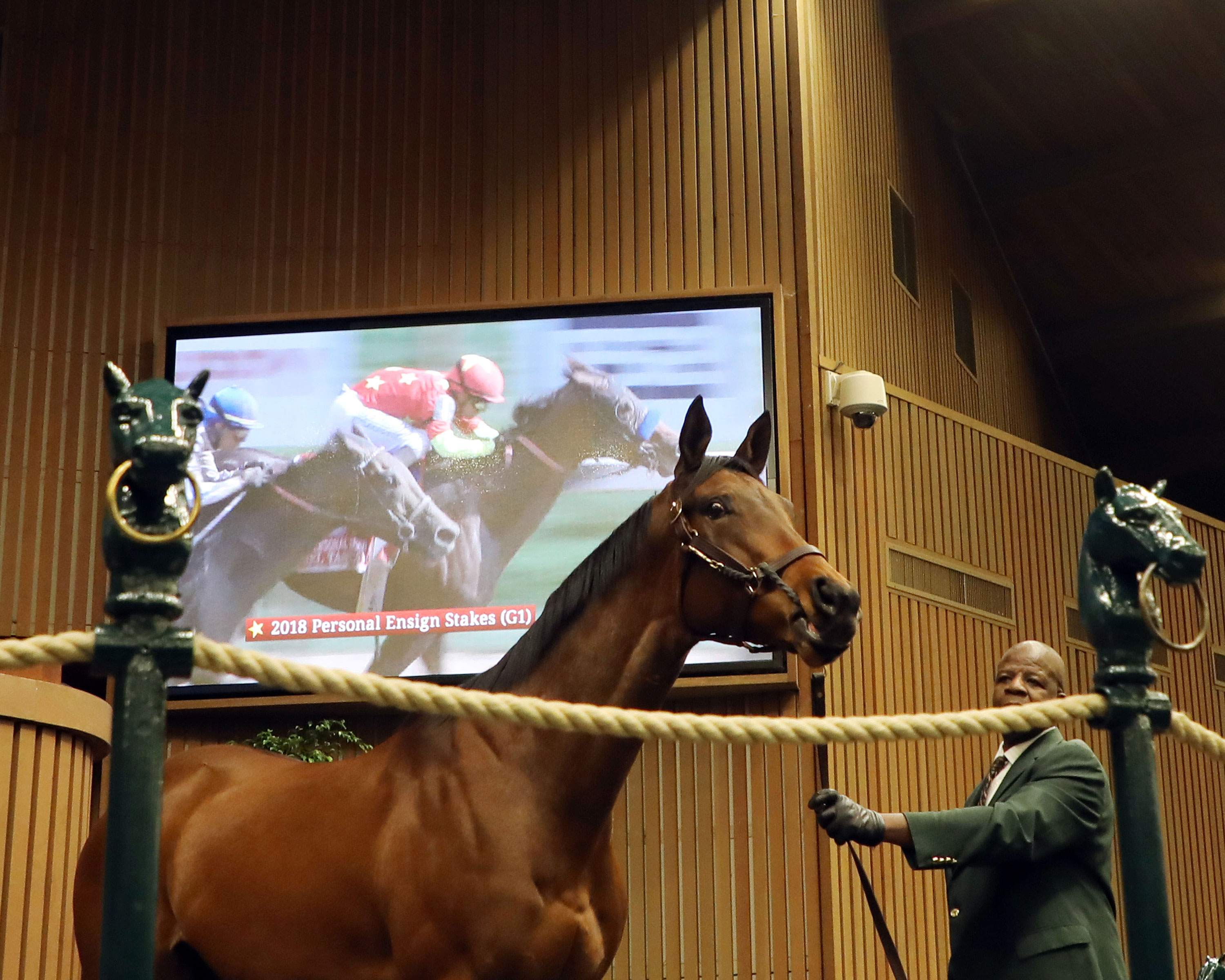 LEXINGTON, KY – The Keeneland January Horses of All Ages Sale–which surged passed its total 2018 gross after its third session Wednesday–concluded Thursday with its highest gross since 2008 and with a record-setting average and record-equaling median.

“This sale exceeded our expectations,” Keeneland President and CEO Bill Thomason said. “The desire of buyers to compete at the highest levels and their commitment to invest in breeding and racing stock continue to create the momentum that flows through these sales. It’s exciting for the entire industry.”

Champion Abel Tasman (Quality Road) was the star of the January sale and set the tone for the auction when bringing a final bid of $5 million–a sale record for a broodmare prospect–from Coolmore during Monday’s opening session. The auction featured five horses to sell for $500,000 or over, up from two in 2018.

“With Abel Tasman, obviously, we kind of anticipated that day one would be up from last year,” said Keeneland’s Director of Sales Operations Geoffrey Russell. “But if you take her out, it was still up considerably from last year. It’s just been a continuation of November.”

Russell continued, “We were very fortunate this year to have some very nice mares in the first two days that attracted [major buyers like] the WinStars, the Spendthrifts, the Summer Winds and all of those, even if you take away Abel Tasman. But then you add in Abel Tasman and she was the queen of the day.”

“It’s a very good market at the moment, and the depth of quality in this January Sale catalog generated brisk trade well into the final day of the sale,” Keeneland Vice President of Racing and Sales Bob Elliston said. “In particular, we saw an exceptional group of yearlings and fillies off the track, led by Abel Tasman, whose sale created early energy. Credit goes to our consignors for bringing these outstanding individuals to market and for setting realistic reserves on their offerings.”

A competitive weanling market at the November sales led to strong demand for short yearlings at the January sale, according to Russell.

“On the short yearling side of it, I think the pinhookers did not fill their orders in November, so they had no choice but to come here in January,” Russell said. “We knew that back in November because they kept asking us what was in January.”

“The yearling market through this whole sale has been very strong,” Hunter Valley Farm Manager Adrian Regan said. “We tried to buy plenty and got outbid a lot. When you bring up a nice foal, there is plenty of competition.”

“We continue to see a trend where the very top of the market is healthy, and anything with quality–if there’s blue sky on the horizon that a mare or the foal she’s carrying can even have the possibility of being a six-figure horse–people really embrace that,” the agency’s Mark Taylor said. “When you get down to the ones in the bottom quarter to third of the market, you have to be very conservative with your reserves and you’ve got to know your product.”

Demand for quality offerings remained high throughout the auction, with six horses bringing six figures during Thursday’s finale, led by Doug Scharbauer’s purchase of the broodmare prospect Classy Tune (Maclean’s Music) for $230,000. In all, 11 head sold for $100,000 or more during the two-session Book 2. Two hit that mark in the same section in 2018.

A daughter of Street Sense was the top-priced short yearling Thursday, selling to Reiley McDonald for $105,000.

Up next on the Keeneland sales calendar will be the April 2-Year-Olds in Training Sale which returns in 2019 after a four-year hiatus.

“[Keeneland Director of Sales Development] Mark [Maronde] and [Keeneland relationship manager] Kyle [Wilson] will be going down to Ocala Monday to do the second run through there recruiting horses for the sale,” Russell said of preparations for the April sale. “The feedback has been very positive so far.”

Douglas Scharbauer is intent on improving the quality of his broodmare band and Valor Farm general manager Ken Carson has been busy shopping for the Texas owner at Keeneland this week. Carson made his biggest purchases of the sale Thursday to take home the session’s top two-priced broodmare prospects. Leading the way was Classy Tune (Maclean’s Music) (hip 1427), a multiple stakes placed 5-year-old mare, who sold for $230,000 from the Eaton Sales consignment.

“We are just improving our broodmare band and that was one of the ones that [Scharbauer] liked,” Carson said. “We’ll certainly be in Texas always. We stand stallions there and have a farm there. But we are going to increase our involvement up here [in Kentucky] because there really isn’t a great market in Texas right now. If that changes, we will change with it.”

“She is a gorgeous mare and she had real ability,” Eaton Sales’ Reiley McDonald said of Classy Tune. “She’ll make a lovely broodmare.”

Scharbauer purchased Valor Farm in Pilot Point, Texas, from the estate of his late father Clarence Scharbauer, Jr. in 2016. The farm stands nine stallions, including Congaree, Eagle, Grasshopper and Too Much Bling. Scharbauer’s Kentucky mares are boarded at Hidden Brook.

Earlier in the session, Carson went to $135,000 to acquire the unraced Rosalia (Orb) (hip 1278). The broodmare prospect was consigned by Mill Ridge Sales on behalf of Juddmonte Farms.

“She is a beautiful filly, just absolutely stunning,” Carson said of the filly.

Rosalia, purchased by Juddmonte for $450,000 at the 2016 Fasig-Tipton Saratoga sale, is a daughter of multiple stakes winner Miss Atlantic City (Stormy Atlantic) and a half-sister to graded stakes placed Miss Southern Miss (More Than Ready). She is from the family of Grade I winner Cotton Blossom and multiple graded stakes placed Vicarage.

“She found a very good home with Doug Scharbauer,” Mill Ridge Sales’ Headley Bell said of the filly. “Obviously beauty still sells and she’s a very attractive filly and two people wanted her. We were not expecting that kind of money, but two people got together and they were determined.”

“We all know what Juddmonte is, it’s the cream of the cream,” Headley explained. “And [Rosalia] is a filly that, unfortunately, they tried to supplement to their program and she didn’t work out. And they move them on. Their culls are other people’s jewels, without question.”

Of Scharbauer’s plans for his breeding operation, Carson said, “He doesn’t like to sell very much, but hopefully he’ll do both [race and sell].”

A pair of racing prospects from Juddmonte Farms proved popular late in Thursday’s Keeneland January finale, with bloodstock agent David Ingordo going to $140,000 to acquire Own Agenda (First Defence) (hip 1531). The 4-year-old has won two of eight starts in the Juddmonte colors for trainer Bill Mott, most recently finishing seventh in a Nov. 28 Aqueduct allowance.

“I’ve been waiting around for that horse,” Ingordo said after signing the ticket on the dark bay colt, who will be joining the Florida base of his wife, trainer Cherie DeVaux. “Garrett [O’Rourke] at Juddmonte had told me he was alright and Bill Mott had mentioned him to Cherie. I bought him for her and for some friends of ours. We’ll see what happens.”

The next horse through the ring was another Juddmonte racing prospect trained by Mott. The 4-year-old Westerland (GB) (Frankel {GB}) (hip 1539), most recently fifth in a Nov. 16 Churchill allowance, sold for $100,000 to Three Diamonds Farm.

“It is the hardest thing in our business to do right now, period, because the end-user, the people that want to win the big races, own them and there is not a lot of inventory out there of horses that you can buy,” he said. “My clients, they want to buy the horse and move it to their program. So for what we are trying to do, it’s very difficult. Someone will sell a piece, but they want it to stay with their trainer, with everything their way. But my client base, they have their own program, their own ideas. So finding the Stellar Winds in this day and age is hard to do. Finding something that can run is hard. We have babies, but you have to develop them. With something like this, he can go to the entry box sooner.”

A filly by Street Sense (hip 1251) was first to break through the six-figure threshold during Thursday’s final session of the Keeneland January sale when bringing a final bid of $105,000 from Reiley McDonald as part of a pinhooking partnership.

“I thought she was a great physical with a really beautiful top line,” McDonald said of the short yearling. “She looks very racy.”

Bred by H & L Partners and consigned by Lane’s End, the bay is out of Peace Talk (Arch), a half-sister to multiple group placed Zaham (Silver Hawk). She followed her dam into the ring Thursday. In foal to Astern (Aus), the 9-year-old Peace Talk sold for $47,000 to Turkish owner Arif Kurtel. Kurtel was the most prolific buyer at the four-day January sale, purchasing 17 horses for $664,000 and an average of $39,059.